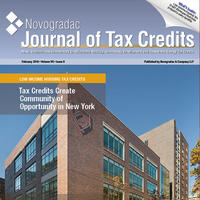 The Community Reinvestment Act (CRA) is a powerful driver of bank lending and investment for properties with low-income housing tax credits (LIHTCs) and new markets tax credits (NMTCs), as well as for other affordable housing and community development purposes. Accordingly, banks are often reluctant to provide financing if they are uncertain that a particular loan or investment will get CRA consideration. Clarifying the CRA rules in several areas would significantly increase access to community development (CD) capital.

This is particularly significant in the current scenario, where some communities and development types don’t benefit from as much investment demand and could thus benefit from CRA policy clarification.

Enacted in 1977, CRA established that banks with federally insured deposits have a continuing and affirmative obligation to help meet the credit needs of their entire communities, including low- and moderate-income (LMI) areas and people, consistent with safety and soundness. Federal regulators periodically examine each bank’s CRA performance in the “assessment areas” where a bank’s branches are located. The regulators consider CRA performance whenever a bank seeks permission to acquire or merge with another bank, acquire assets or assume liabilities, or open a branch.

To understand how CRA affects a bank’s financing decisions, it is important to know how federal regulators examine banks. The CRA exam for large retail banks (with assets greater than $1.2 billion) consists of three “tests”–lending, investment and service. The largest banks may have 100 to 300 assessment areas nationwide and up to 30 or more within a large state such as California, so managing a CRA strategy is complex. For a bank with multiple assessment areas within a state, examiners perform a full-scope review for the one or two areas where the bank has the most deposits (often the largest metropolitan areas) and a limited-scope review elsewhere (usually rural and the remaining metropolitan areas). The bank then receives separate performance ratings for each full-scope review area and for the state as a whole, but not for the limited-scope areas. A bank with branches in more than one state receives a separate rating for each state and an overall institution-level rating. It is easy to see why banks prioritize activities certain to get full CRA consideration.

Wholesale banks (including trust banks and investment banks) and limited purpose banks (such as credit card banks) have only a CD test because they do not generally offer mortgages or business loans or consumer deposit accounts. Smaller retail banks also have streamlined exams.

The CRA regulations were last comprehensively revised in 1994, the year in which Congress first authorized interstate banking. Federal regulators have also issued formal Questions and Answers (Q&A) and examination procedures to interpret the regulations in the context of substantial changes in the banking industry, public policy and the practice of community development.Clarifying certain policies would improve the availability of CD financing. These clarifications would not require changes to the CRA regulations, which the banking agencies are not currently prepared to consider, or to the underlying statute.

The agencies finalized Q&A guidance on CD in 2013 and updated large bank examination procedures in 2014. This guidance is helpful, particularly by: (1) clarifying that CD activity outside a bank’s assessment areas (AAs) will be considered in a bank’s state- or institution-level ratings; and (2) removing the possibility that regional activity will be discounted because benefits to an AA might be diffuse. However, the guidance is still too unclear to affect many bank decisions and, consequently, to expand communities’ access to CD resources.

In recent years, wholesale, limited-purpose and Internet banks (or “WLPIBs” for short) have grown as nonbank financial firms have obtained bank charters and Internet banking has emerged. Of the 40 largest U.S. banks, 13 are WLPIBs with combined domestic assets of $1.5 trillion.

Unlike a traditional large retail bank, a WLPIB generally has no or very few deposit-taking offices and the great majority of its deposit holders are located outside its AA. For purposes of CRA, a WLPIB is usually assigned a single AA where its headquarters is located. This location is not reflective of its banking activity or capacity.

Overemphasizing a WLPIB’s CD activity in its AA has unintended consequences. A WLPIB may feel obliged to undertake far more CD activity within its AA than the level of its local banking activity would reasonably indicate. This concern is compounded in the markets where WLPIBs tend to be chartered (e.g., Utah, Delaware and New York City). The finite CD opportunities in those markets fall far short of what the banks’ collectively need to meet performance benchmarks. The resulting hyper competition distorts pricing and can erode credit standards without actually expanding CD activity. Meanwhile, some WLPIBs do not pursue CD activities beyond their AAs because they will receive CRA recognition for such activities only after meeting an “AA responsiveness” metric that is unknowable in real time and perhaps unachievable.

To address these anomalies, the agencies should clarify that:

Under Q&A guidance, the full amount of a loan or investment will receive CRA consideration even if less than “a majority of the dollars or beneficiaries of the activity are identifiable” to CD purposes, provided that: (1) the express, bona fide intent is primarily CD; (2) the activity is specifically structured to achieve the CD purpose; and (3) the activity accomplishes or is reasonably certain to accomplish the CD purpose. However, this policy has proven too complicated to implement clearly and consistently.

For example, some CRA examiners have discounted consideration for loans or investments for a LIHTC property if less than half of the units are affordable. Similar treatment can arise for mixed-income housing developed under state and local policies. Federal regulators should clarify that any loan or investment made in conjunction with a federal, state or local government’s CD policy will meet the primary purpose test and thereby receive full consideration, provided that at least 20 percent of the beneficiaries will be LMI people. The 20 percent standard is consistent with such federal policies as LIHTC, tax-exempt multifamily bonds and the HOME Investment Partnerships program.

About 80 percent of the 26.3 million rental units affordable to LMI households have no restriction on tenant incomes. Yet, the current CRA policy guidance offers little or no encouragement of bank financing for much of the naturally affordable rental housing stock. Unless renter incomes can be verified, the federal regulator must determine that LMI households are likely to benefit, based on demographic, economic and market data. The current policy is unworkable because banks need to know the CRA treatment of an activity when they make a financing decision but they generally do not collect tenant income data (and cannot do so for properties not yet occupied). Extensive impact analyses are also administratively burdensome and subject to interpretation. Because examiners are less likely to consider rental housing outside LMI areas, the policy is particularly unsupportive of fair housing efforts to offer housing affordable  to LMI renters in middle- and upper-income “high opportunity” areas, an objective integral to HUD’s new Affirmatively Furthering Fair Housing policy.

The Federal Housing Finance Agency, in setting affordable rental housing goals for Fannie Mae and Freddie Mac, determines affordability based solely on rents, not actual renter incomes. This approach is widely regarded as reasonable and workable. Consistent with underlying CRA policies that target both LMI places and people, federal regulators should clarify  that:

Historically, the primary regulatory effect of a bank’s CRA rating has been its impact on the approval of an application, especially for charter mergers, acquisitions or conversions. However, this significance wanes in periods when charter mergers and acquisitions are infrequent, as has been the case for several years. Accordingly, many banks are questioning whether achieving an Outstanding CRA rating is worth the effort or, alternatively, a Satisfactory rating is sufficient. To encourage banks to strive for an Outstanding rating, federal regulators provide expedited processing of applications from banks with Outstanding CRA ratings. Expedited processing itself would not in any way imply favorable disposition of an application or provide a safe harbor protection against community objections. Nevertheless, faster disposition of a bank’s application would have a direct financial benefit.

Buzz Roberts is president and CEO of the National Association of Affordable Housing Lenders, an alliance of private capital providers including banks and mission-driven lenders and investors.

Everything You Need to Know about State LIHTCs in 2022
Knowing What Makes a Property Unique, Distinct is Vital in the Preservation of Affordable Housing
Value of Gain Exclusion Expected to Continue to Drive Opportunity Zones Investment in Low-Income Communities, even Without Basis Step-Up
END_OF_DOCUMENT_TOKEN_TO_BE_REPLACED