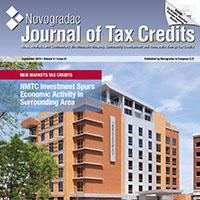 Many hours are spent planning, checking and rechecking tenant files, income limits, utility allowances and numerous other factors to ensure that a property stays in compliance with low-income housing tax credit (LIHTC) requirements. However, even the best intentioned of owners might encounter a situation where they could face a recapture. LIHTC recapture can strike any property, anywhere. There are many causes of recapture, and it can cause a substantial financial effect to a property and its owners. So, how do you identify recapture? What is its effect and why does it even exist? This article discusses the circumstances that can lead to recapture, illustrate how to calculate the recapture and explain how interest plays a role in the overall financial impact.

Why Does Recapture Exist?
When Congress enacted the LIHTC program, it gave development owners the benefit of the doubt. In return for an owner’s agreement to operate a property in accordance with LIHTC requirements for 15 years, Congress would allow the owner to report its credits over 10 years. Again, the credit period is 10 years, and the compliance period is 15 years. By using a 10 year credit period, Congress increased the financial present value of those credits, which increased investor appetite and the price they were willing to pay. This presented a problem, as it created a disparity between the credits earned and the credits claimed. This gap in credits is most commonly referred to as the “accelerated credits.” Recapture is simply the method of returning those claimed, but unearned credits back to the Treasury.

When determining the recapture this rate is taken into account as follows:

Recapture cannot occur in year 1. Instead, no credits would be claimed in year 1, and future credits would be claimed over the full 15 years, most commonly referred to as the two-thirds credits, which will be discussed later in this article. To better illustrate how the compliance period and credit period interrelate with one another we have provided the table below.

Measurement Period
Because qualified basis is measured at year-end, if a potential recapture event is identified during the tax year and corrected before year-end, there would be no recapture or loss of credits. Most often a taxpayer’s year-end is Dec. 31, but in some cases it may be different. If a taxpayer were to begin claiming credits while under a fiscal year-end, such as Sept. 30, the year-end measurement date for the remaining compliance period would be Sept. 30.

Decreases in Qualified Basis
A decrease in qualified basis occurs in three general situations: a unit is not occupied by a qualified tenant or lack of proper rent restrictions; a building is disposed and it is not reasonably expected to continue to be operated as a qualified low-income building; or a unit is not suitable for occupancy.

Let’s look into some examples of certain events that could qualify as a recapture event.

Nonqualified Units
The most commonly encountered recapture event is likely caused by a nonqualified unit. This could occur for any number of reasons, and is good reason to have an excellent compliance division reviewing tenant files. An unqualified unit could be caused by leasing to an over-income tenant. A nonqualified unit could also be caused by charging above limit rent and application charges, renting to a household of full time students, or a variety of other compliance issues. If not corrected by year-end, this type of noncompliance would lead to both a loss of credits and recapture the previously accelerated credits.

Building Dispositions
Disposition of a building through sale or foreclosure, could lead to recapture; however, an exception is made if it is reasonably expected that the building will continue to be operated as a low-income building. If such an expectation can be made, the seller would not encounter any recapture; credits during the year of sale would be simply allocated be on a pro rata monthly basis, and future years’ credits would continue to accrue to the buyer. If, however, the buildings are not expected to remain low-income qualified, the owner would lose the current year credits and recapture the previously accelerated credits.

Units Not Suitable for Occupancy
Not only could casualty loss events, such as flood, fire and wind lead to recapture, but so could a dilapidated unit. Taken at year-end, a unit found uninhabitable at year-end due to deferred maintenance and disrepair would lead to a loss of current year credits and recapture the previously accelerated credits. This is not to be confused with a unit undergoing a normal make ready process, this rule was intended to prevent LIHTC properties from becoming subpar housing.

A casualty event, on the other hand, would not automatically lead to such recapture. Instead, units damaged by a casualty event would only lose credits if the units were not back in service by Dec. 31, and recapture would only occur if the repairs were not made within a reasonable time. The IRS has stated that a reasonable period is generally a period not to exceed two years from the close of the year of the casualty loss. Additionally, major disaster areas are offered an exception that allows credits to continue to be claimed; however the property must still be repaired within the IRS guidelines. Revenue Procedures 2014-49 and 2014-50 were issued August providing further guidance related to major disasters and qualified low-income properties.

In any case other than a casualty event, if the applicable fraction of a qualified low-income property were to fall below the minimum set-aside, the project would lose current year credits, face recapture, and no longer participate in future credits.

When calculating the proportion of recapture, the formula is switched and the eligible basis is multiplied by the greater of recaptured units or floor space, because this will lead us to determining the new applicable fraction:

Once the new applicable fraction is determined, it is applied to the eligible basis found on Line 7 of the building’s IRS Form 8609:

After the qualified basis is determined, the previously claimed credits are determined per building, on an annual, cumulative basis, upon which recapture interest will later be determined. In this example, a 9 percent tax credit percentage and recapture event in 2014 have been assumed, Building 1 would have cumulative recapture determined as follows:

Once the annual cumulative recapture amounts have been determined, the recapture interest can then be calculated.

Recapture Interest
In the event of recapture, an owner not only loses the accelerated portion of credits, but also the time value of money associated with claiming the “unearned” credits early. The IRS requires interest to be computed at the overpayment rate determined under section 6621(a)(1), compounded on a daily basis. The overpayment rates are published quarterly by the IRS and can be found online at www.novoco.com by searching for “Interest Rates for Tax Credit Recapture.” The overpayment rates are based on the federal short-term federal rate, and have remained flat at 2 percent and 3 percent for corporate and non-corporate filers, respectively, since late 2011.

Interest is calculated beginning on the due date of the originally filed return claiming credits (excluding extension) through the date that the recapture and interest has been fully repaid to the IRS. The interest is nondeductible. In the table below, we have illustrated the impact of recapture interest upon a recapture event.

Going Forward
Following the recapture event, and assuming the event causing the recapture has been corrected, the qualified basis will be increased and the remaining credits will be claimed over the 10-year credit period. For example, if a building had been claiming credits at a rate of $15,000 per year, and encountered a recapture event in year 5, it would lose the $15,000 it would have claimed in year 5, it would claim recapture the four previous years of accelerated credits, and going forward would claim $15,000 per year until year 10.”

Conclusion
Next time you encounter a potential recapture event you will know the factors that play a role in the recapture and how to determine the financial impact to your property. For additional questions, contact a Novogradac & Company compliance professional.