It could have taken 20 years for Cuyahoga Metropolitan Housing Authority (CMHA) to finance the renovation of Bohn Tower in downtown Cleveland. Instead, it will only take one. Through the U.S. Department of Housing and Urban Development (HUD) Rental Assistance Demonstration (RAD) program, Bohn Tower converted its 266 apartments from public housing to project-based rental assistance and leveraged low-income housing tax credits (LIHTCs) to give the property a complete makeover.

“RAD was new to all of us and it was a great learning tool,” said Carolyn Gaiter, CMHA’s chief operating officer. “The small amount of capital funds inserted into this project leveraged many more million dollars in capital improvement.”

The 22-story Bohn Tower has been a bastion of senior affordable housing in Cleveland for decades. It was named for Ernest J. Bohn, who was known as “the father of public housing” for his role as the founding director of CMHA, the country’s first housing authority in 1933. After 45 years of serving the community, Bohn Tower needed major updates to remain viable in a city that is experiencing gentrification in many of its neighborhoods. “Our central business district is going through a boom and housing there can’t go up fast enough–the vacancy rate is less than 5 percent,” said Michael Shea, CMHA’s director of modernization and development. “This is a great opportunity to maintain our presence in downtown.”

It took more than a year for the transaction to close and several years for construction to be completed. One of the biggest challenges was modernizing its two elevators and adding a much-needed third one, which required cutting into the concrete slab structure. Another reason for the lengthy construction period was that CMHA kept the building partially occupied during renovation to maintain cash flow and to minimize the burden of moving for tenants.

Bohn Tower residents love the new look of their home now that the rehabilitation work is completed, said Nadine Head, CMHA’s board commissioner who acts as an advocate for CMHA residents. “The renovations were much-needed,” said Head. “When I saw the building for the first time, I thought it was a nice building, but after the renovations were done, I was awestruck…They’ve done a terrific job and the residents are happy.” 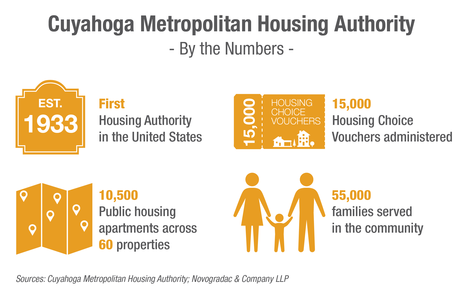 Partners said Bohn Tower was an ideal fit for the goals of the RAD program. “The RAD program came about because of the growing capital backlog that HUD has with public housing across the country,” said Shea. He added that through RAD, Bohn Tower takes care of 20 years of capital needs in Year 1 and allows it to build up its replacement reserves for the future.

Others echoed the importance of the public-private partnership that helped maintain Bohn Tower as quality affordable housing for low-income seniors. “Without tax exempt bonds and LIHTC financing, a project of this size…could not happen,” said Elizabeth Richards, program director for Enterprise Community Partners in Ohio. “We hope that Bohn Tower serves as an example to other housing authorities that financing programs, such as RAD and LIHTC, can help them renovate important buildings in their portfolio, while protecting tenants and ensuring affordability.” For the Bohn Tower renovation, Enterprise Community Partners provided $8.5 million in LIHTC equity, Bellwether Enterprise provided an $11 million HUD 221(d)(4) loan and Enterprise Community Loan Fund provided a $1 million bridge loan.

“CMHA is the oldest public housing authority in the country, so it’s only fitting that it’s also one of the pioneers of the RAD program,” said Renee Beaver, CPA and partner at Novogradac & Company LLP. “Bohn Tower is an excellent example of how private capital can be leveraged through the RAD program to preserve a critical community asset that residents can enjoy for years to come.” 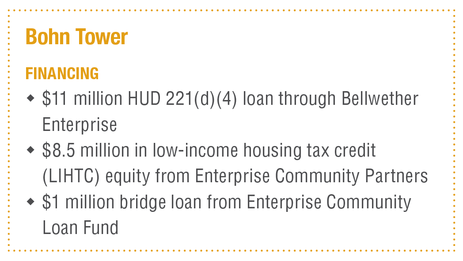