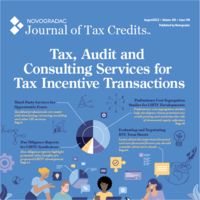 A 15% global minimum tax (GMT)–agreed to in principle by more than 135 nations that represent more than 90% of the world’s gross domestic product–could increase worldwide tax revenue by $150 billion annually.

While the ultimate fate of the GMT is to be determined, affordable housing, community development and renewable energy stakeholders are concerned about how the proposal may affect corporate demand for tax credit equity investments.

The Organisation for Economic Co-operation and Development (OECD) and the Group of Twenty (G-20) support the GMT, which is part of a “two-pillar solution” to reform international taxation rules and to ensure that multinational enterprises pay a fair share of tax where they operate and generate profits. However, the GMT could starkly reduce the value of American business tax credits and other tax incentives, including the low-income housing tax credit (LIHTC), new markets tax credit (NMTC), historic tax credit (HTC) and renewable energy tax credits (RETCs)–without changing the U.S. tax code.

Advocates for community development tax credits are working to ensure that implementation guidance includes language and examples affirming widely held interpretations as to how tax credit equity investments generally receive favorable treatment under the GMT as currently structured–specifics of which are discussed later in this column.

Over recent decades, an increasing number of global companies have shifted income into low-tax countries, reducing the tax receipts in nations where they are otherwise doing business. That prompted the OECD and G-20 in 2015 to create the Inclusive Framework on Base Erosion and Profit Shifting (BEPS), a 15-point action plan that seeks to ensure that global companies pay a 15% minimum tax on global income.

Six years later–in October 2021–136 countries approved a statement finalizing several key aspects of a framework, including the “two-pillar solution.” Pillar I would allow governments to tax the world’s largest firms (those earning more than €750 million annually in two of the previous four fiscal years) where their goods and services are sold, rather than where they are based. Pillar II–the part that most directly affects community development tax incentives–would establish the Global Anti-Base Erosion (GloBE) rules, intended to ensure that large multinational enterprises pay an effective income tax rate of at least 15% in each jurisdiction in which they operate.

The rules document and commentary constitute the beginning of interpretive guidance for nations as they work toward incorporating GloBE rules into domestic laws. Each nation must individually adapt its laws to the inclusive framework and the guidance will help shape how that is done.

How tax credit equity investments interact with the 15% GMT is the key issue for U.S. community development advocates. Under the OECD proposal, an enterprise’s effective tax rate equals the total of the adjusted covered taxes divided by the net GloBE income for the fiscal year. Income and taxes are based on a standardized financial accounting base (such as GAAP or IFRS), with adjustments.

An incentive to join the agreement comes from the fact that member nations would receive a “top-up” tax to reach 15% from any enterprise with an effective tax rate of less than 15% in one or more jurisdictions. That total would otherwise go to countries that are compliant.

The concern is that calculating the tax rate after taking into account investments in such community development tax incentives as the LIHTC, NMTC, HTC or RETCs (or proposed community development tax credits, such as the neighborhood homes tax credit) could reduce an affected multinational corporation’s effective tax rate below 15%, leading to a top-up tax. Doing so would eliminate some or all economic value of such tax credit investments to many corporations.

An enterprise’s effective tax rate is determined by including all entities that are consolidated under applicable financial accounting standards, which generally excludes entities accounted for under the equity method. That exclusion is significant because much of the investment in U.S. community development tax credits is accounted for under the equity method.

Note that qualified refundable tax credits are treated under GloBE rules as income and do not reduce an entity’s covered taxes. That exclusion may be helpful in many nations, but U.S. community development tax credits are generally not refundable–and it would take an act of Congress for them to become so.

A written affirmation by the OECD of the application of the equity method exclusion to tax credit equity investments would settle the issue and help mitigate potential adverse effects of a GMT on U.S. community development tax credit equity investments. Novogradac recently formed a working group to focus on the GMT issues. The group advocates for the widely held interpretation and seeks confirming guidance from the OECD. Other stakeholders are also advocating for that guidance.

How tax credits should be addressed is one of hundreds of issues facing the OECD as it prepares the next implementation guidelines, but it’s one of the most significant issues (if not the most significant issue) for American negotiators. The U.S. is participating in the OECD discussion and drafting of implementation guidance and the handling of tax credits is thought to be high on its list of priorities.

One potential hurdle for addressing the issue this year is the fact that Pillar II’s implementation is set for 2024–although it could be pushed back a year to 2025. That delay could provide an opportunity for the OECD to postpone issuing clarifying guidance this year.

That could be harmful to equity investment markets, since tax credit equity investors make long-term plans: Uncertainty for 2025 could harm investment in 2023 and 2024. Clarification from the OECD would help mitigate the potential adverse effects on tax credit pricing and without such clarification, investors could face an ongoing situation similar to when Donald Trump was elected president in 2016 and tax rates were expected to be lowered. During the months following his election, tax credit equity pricing dropped in anticipation of a decrease in the corporate tax rate (which would decrease the value of the accompanying tax losses).

Advocates are also seeking clarification from the OECD that joint venture rules–which are designed to preclude companies from shielding income from the GMT by forming entities in low-tax jurisdictions and excluding the income under the equity method–do not apply to U.S. tax credit equity investment structures, because the United States is not a low-tax jurisdiction as defined under Pillar II.

As said earlier, clarification from the OECD could come this year. Treasury, representing the U.S. in the OECD, will play a key role in securing these clarifications, and U.S. stakeholders should continue to advocate with Treasury so that such clarifications remain a priority. The OECD could go a long way to settling the issue by declaring that:

The OECD has a huge job ahead of it. Clarifying guidance this year concerning tax credit equity investment–and adoption of that guidance by the participating nations–would go a long way to assuring the value of the tax credit equity investments and allowing their benefits to continue to flow to affordable housing, community development, historic preservation and renewable energy.

A Look at the LIHTC: Past Pricing Trends, the Current Market and Future Concerns
Trump Administration Should Use Tax Credits to Create Jobs, and Invest in Infrastructure
Washington Wire: Macroeconomic Scoring of Tax Reform Proposals Could Improve Outlook for Investable Tax Credits
END_OF_DOCUMENT_TOKEN_TO_BE_REPLACED