Midterm congressional elections are always important. For the affordable housing, community development, historic preservation and renewable energy communities, the 2018 version is particularly so.

Americans go to the polls Nov. 6 with as much fanfare as any recent non-presidential election. The election will be treated as a referendum on the presidency of Donald Trump, but the implications to the tax credit communities are significant.

At stake is the potential success of such legislation as the Affordable Housing Credit Improvement Act, the New Markets Tax Credit (NMTC) Extension Act, the Historic Tax Credit (HTC) Enhancement Act and others. Just as significant–and perhaps more so–are leadership positions on committees that have tremendous influence.

Of course, any look ahead comes with a few caveats: It’s incredibly difficult to predict the outcome of elections, particularly the 435 House of Representatives elections and 35 Senate seats up for grabs (a reminder that most national prognosticators got the 2016 presidential election wrong). Another caveat is that regardless of which party controls Congress, legislation requires a presidential signature to pass. That’s unless there are enough votes in the Senate to override a presidential veto–a scenario that is almost inconceivable before at least 2020.

Here’s a look at what’s at stake, the likely outcomes and what could happen if Democrats take control of either or both houses of the 116th Congress, which begins Jan. 3, 2019.

Republicans have controlled the House of Representatives since the 2010 midterms, when they gained a stunning 64 seats. The GOP’s margin has been at least 33 seats since then, including a current 47-seat margin. In order to take back the House, the Democrats need to flip 24 seats, which appears quite possible at this point.

In the Senate, it’s a smaller margin for the Republicans–two seats, since the tie-breaking vote goes to the vice president. The traditional outcome during midterms–that they are a setback for a sitting president–is offset by the fact that Democrats face a tall task, with 26 of the 35 seats at stake held by Democrats or Independents that caucus with the Democrats. Ten of those 26 are in states that Trump won in 2016 and in five of those, Trump won by double-digit margins. Those incumbents are Sens. Joe Manchin, W.Va.; Joe Donnelly, Ind.; Claire McCaskill, Mo.; Heidi Heitkamp, N.D.; and Jon Tester, Mont.

Democrats (or Independents) would have to win 28 of the 35 elections to take control of the chamber. In each of the nine previous cases of a party defending 21 or more seats–regardless of whether it held the White House–the party lost seats.

That portends a tough election environment for Senate Democrats, but one that’s surmountable.

History suggests Democrats will gain seats in the House, although whether they will gain enough to take control is an open question–partly because the redrawing of Congressional maps after the 2010 census created a large number of safe districts for Republicans, reducing the number of swing districts.

In fact, of the past 20 midterm elections, 18 (the only exceptions are 1998 and 2002) saw the president’s party lose seats in the House. Since 1934, the party of a newly elected president has suffered an average loss of 23 seats in the House in the following midterm, which is almost exactly the number Democrats need to retake the House.

The House flipped parties–control switching from the president’s party to the opposing party–three times in the past six midterm elections, a pattern Democrats hope to continue and many experts expect. 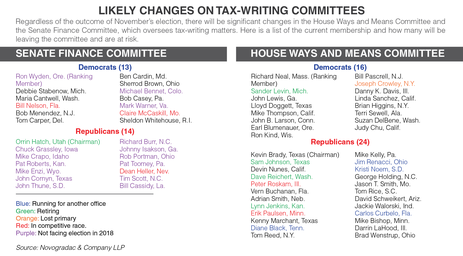 Websites that rate the chances of political outcomes is a relatively new phenomenon, although predicting outcomes is as old as politics.

The website fivethirtyeight.com, the best known of the type, uses a combination of polls to predict the outcome. The site in early September estimated that Democrats had a more than 75 percent chance of winning control of the House.

In the Senate, the predictions are harder to find, but most pundits predict that Republicans will continue to hold a narrow edge. In other words, the experts project the Democrats will win the House, the Republicans keep control of the Senate.

However, let’s consider the results should the Democrats take one or both houses of Congress.

Start with the highest-profile issue: Who would lead the chambers?

In the House of Representatives, who becomes speaker is an issue regardless of who wins control, since Paul Ryan, R-Wis., will step down from the position. If the GOP retains the House, there could be a scramble to succeed Ryan.

Traditionally, House Democrats and Republicans hold Democrat and Republican caucus elections in November after the election in advance of the January floor vote for speaker.  For the party in the majority, the victor of the caucus vote is nominated for speaker on the floor of the House.  Majority party members who may not have voted for the nominated candidate in the caucus vote usually vote for the candidate on the floor of the House. As such, the winner of the majority party traditionally becomes Speaker.

Ryan has endorsed Majority Leader Kevin McCarthy, R-Calif., as his successor if the Republicans retain control of the House, but there has been resistance, particularly from the more conservative elements of the party, who support Jim Jordan, R-Ohio. House Majority Whip Steve Scalise, R-La., is viewed as a likely candidate should McCarthy be unable to get sufficient caucus votes, or the necessary 218 votes on the House floor.

If the Democrats win control, there is question about whether Minority Leader Nancy Pelosi, D-Calif., could get enough votes from her party. Pelosi said she’ll run for speaker in that scenario, but other Democrats may challenge her. If she fails to get the necessary caucus vote or the 218 votes needed on the House floor, the possible successors begin with current Minority Whip Steny Hoyer of Maryland and No. 3 Democrat Jim Clyburn of South Carolina–and then the field opens.

The leadership could flip in the Senate, too, where the majority leader could change hands from Sen. Mitch McConnell, R-Ky., to Sen. Chuck Schumer, D-N.Y., if the Democrats (with the  Independents who caucus with them) take the majority.

The party in control of the House or Senate also gains the majority of seats and leadership of all committees–which guarantees a significant role in decisions over what legislation is heard by the committee and whether those committees vote to advance legislation.

Should the House go to Democrats, chairmanship of the House Ways and Means Committee would switch from Rep. Kevin Brady, R-Texas, to a Democrat, likely Rep. Richard Neal, D-Mass. Neal is the lead Democrat sponsors of the New Markets Tax Credit Extension Act and the Affordable Housing Credit Improvement Act in the House, so it’s reasonable that a Neal-led Ways and Means Committee would push for that legislation.

In addition to leadership, the makeup of the committee changes to reflect the percentage of the members of Congress–in the case of this presumed situation, Democrats would have the majority in the committee, which is presently a 24-16 GOP advantage.

There are a number of committee members who won’t return next year no matter the election results, as seen in the chart on page 5. Bottom line, there will be a lot of turnover on the Ways and Means Committee and the tax credit industries will need to continue their education and advocacy efforts to make sure the new committee members are aware of the importance of tax credits.

In the Senate, there will be changes as well. Orrin Hatch, R-Utah, is retiring as chairman of the Finance Committee, so no matter what happens in the election, there will be a new chairman. In the unlikely scenario that the Democrats win control, Hatch would be succeeded by a Democrat, likely Sen. Ron Wyden, D-Ore., the current ranking member. Like Hatch, Wyden co-sponsored the Affordable Housing Credit Improvement Act with Sen. Maria Cantwell, D-Wash. However, losing Hatch as the lead Republican sponsor will be a setback.

If Republicans hold the Senate, either Sen. Chuck Grassley, R-Iowa, or Sen. Mike Crapo, R-Idaho, will succeed Hatch. Grassley is the Judiciary Committee chairman. With the nomination and likely confirmation of Judge Brett Kavanaugh to the Supreme Court, many expect Grassley to claim the Finance Committee gavel next year, as the next most senior Republican in the committee. Grassley has requested a series of LIHTC reports from the U.S. Government Accountability Office, including one recently released on development costs.

Crapo is the Banking Committee Chairman, but if Grassley passes on the Finance gavel, Crapo would likely claim it as the third most senior Republican. Crapo cosponsored LIHTC legislation in the past and has expressed support for the Affordable Housing Credit Improvement Act.

While there is potential for change on the committee rosters beyond Hatch–with nine of the 13 Finance Committee Democrats up for re-election, including Cantwell and Sen. Ben Cardin, D-Md., the lead Democratic sponsor of NMTC permanence and HTC bills–most members are favored in their re-election campaigns. See the accompanying chart for their status.

Looking at the post-election landscape, things are almost guaranteed to change.

If the Democrats take either or both houses of Congress, significant legislation will need to be bipartisan to be enacted.

If the Republicans hold both houses, we may see another run at tax reform (perhaps making the temporary changes implemented in 2017 permanent) and other changes that might not be friendly to the tax credit community.

Every midterm election is significant. This one is doubly so.