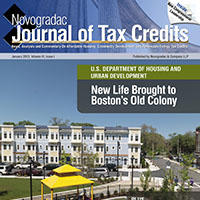 Uncertainty in the global markets and competition among Community Reinvestment Act (CRA)-motivated investors is increasing interest in the tax-exempt bond (TEB) market. More affordable housing developers are closing deals financed by private activity housing bonds as bond investors appreciate the perceived stability of the asset class and search for yield. The TEB market is recovering, with substantial rehabilitation projects in major markets having the most success in finding investors, while secondary and tertiary markets and smaller rehabilitation projects continue to struggle.

“After the [economic] collapse the bond market went quiet. In the last year to year-and-a-half, it’s picked up pretty dramatically. Not as much as the peak before the crash, but it’s definitely as high as it’s been since the collapse,” said Cody Langeness, managing director at Red Stone Partners, which launched its fixed-rate private placement program in mid-2005.

Coming Back
The bond market has improved since the economic collapse, but it is still struggling. Richard Gerwitz, managing director and west and northeast regional director at Citi Community Capital, said that as funds flood into Treasury bonds due to economic uncertainty, driving rates lower, investors are attracted to the tax-exempt municipal market, including multifamily housing bonds, as they search for yield. Barbara Thompson, executive director of the National Council of State Housing Agencies (NCSHA), said that the market is headed in the right direction, but is not where it needs to be. Peter Dion, R4 Capital’s executive vice president, agreed. “It’s trying to heat up,” he said.

A number of investors—mostly financial institutions and mutual funds—are active in the market, say stakeholders. Gerwitz said that TEB volume is up significantly and that the real market driver is the lower interest rates, which result in increased proceeds and refinancing opportunities. He described competition as aggressive in CRA markets, which tend to be larger markets where the gap between market and affordable rents is greater. Properties in tertiary markets can use bond funding, Dion said, as long as the developer fills the gap with soft debt. He added that most bond investors are only interested in substantial rehabs, with at least $25,000 in renovations per unit. Langeness reported that while bonds were used for both new construction and rehabs before the collapse, since then they have primarily been used for rehabs.

Interest rates for investors varied a little. Dion reported interest rates of 3 to 4 percent. Gerwitz said that current tax-exempt rates are translating into mortgage rates of between 4 to 5 percent for affordable multifamily projects.

The Role of LIHTCs
In affordable housing development, TEBs are only one piece of the financing puzzle. The other major funding source is the 4 percent low-income housing tax credit (LIHTC). Garth Rieman, NCSHA’s director of housing advocacy and strategic initiatives, said that as 4 percent tax credit pricing has stabilized, interest in bond deals has increased.

Gerwitz agreed. “You can’t discount the effect that the run up in low-income housing tax credit pricing has on the market,” he said.

CRA-motivated investors have driven up LIHTC prices, particularly in the metro markets, and that has resulted in the economic investors moving to the sidelines. Dion said that most CRA investors prefer 9 percent credits, but that if developers can make their 4 percent projects more like 9 percent deals, with less hard debt and more soft funding sources, they will attract more interest from investors.

“Investors really want the credits, so a bond deal becomes less attractive the more debt that’s in it,” Dion said. As soft funding sources dry up Dion worries that fewer bond deals will be viable. Langeness noted that as the 4 percent LIHTC rate approaches 3 percent, he has seen some deals struggle to close.

For developers like Arthur McDermott, president of McDermott Properties LLC, TEB interest rates at press time were higher than interest rates for conventional debt. He said that prior to the recession, his company used TEBs for rehab projects but in the last few years, there hasn’t been enough soft money to fill financing gaps.

“The bond market just doesn’t exist right now, there’s too much of a [financing] gap. Since the financial crisis, we have not done another acq/rehab deal,” McDermott said. He said that until bonds once again become an effective development tool, the industry will be unable to meet the need for affordable housing.

On the Edge
Stakeholders said that the future of the market depends on Congress and the outcome of fiscal cliff negotiations. Gerwitz said discussions in Washington stand to have a major impact on the affordable housing market, both in terms of what happens to private activity bonds and the LIHTC. Dion said that all bets are off until stakeholders know what the tax code changes will be. Higher tax rates would result in increased interest in TEBs, whereas a lower tax rate or caps on exemptions, including the exclusion of tax-exempt interest, might make them less attractive, Rieman said. Rieman said that six months from now, the industry will know more than it does now, but he couldn’t say where the industry will be.

“It’s so uncertain. I’m hopeful the policymakers will keep those potential impacts in mind,” Rieman said. “We’re doing our best … to influence members [of Congress] so they appreciate the importance of this tool,” Thompson added.