Could Modular Housing Be Affordable Answer to Rising Construction Costs?

Time is money and modular housing construction can save on both.

Not surprisingly, housing providers are taking a second look at modular building as a time- and cost-efficient way to address the national affordable housing shortage.

“Modular construction has been an option for multifamily-type projects for decades,” said Tom Hardiman, executive director of the Modular Building Institute, an international trade association of more than 300 member companies in commercial modular construction. “But it really started to gain momentum about three or four years ago. Developers seeking shorter schedules and quicker return on investment began incorporating modular into their projects, particularly in large urban areas where labor rates were high.”

Case in point: Developer BRIDGE Housing’s first two low-income housing tax credit (LIHTC) developments using modular construction are in one of the most expensive places to build–the San Francisco Bay Area. BRIDGE Housing celebrated the grand opening of its 115-apartment Marea Alta in May and is building an additional 85 homes for San Leandro Senior Apartments on the same site as Marea Alta in San Leandro.

“Modular is something that developers have been looking at as a way to construct buildings more quickly and efficiently,” said Cynthia Parker, president and CEO of BRIDGE Housing. “In the case of Marea Alta in San Leandro, modular helped mitigate a funding gap–especially important now, when the need for affordable housing is so dire.” 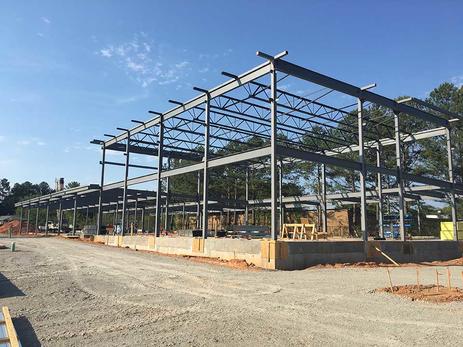 Image: Courtesy of Housing Authority of the County of San Bernardino
Cranes lift modules into place at Valencia Grove in Redlands, Calif., which was the demolition and modular rebuild of a public housing site.

While modular housing construction has been around for years, there can still be confusion about terminology. The terms, “off-site,” “prefabricated,” “manufactured” and “modular” are often used interchangeably in casual conversation, but have different meanings.

Off-site or prefabricated construction broadly refers to a building method in which structural components are manufactured and assembled in a factory, then transported to the site for installation.

Manufactured homes rest on a nonremovable steel chassis, while modular homes are placed on a permanent foundation. The differences in foundation mean that manufactured homes are typically only one story, whereas modular components can be “stacked” to create a multiple-story building–making modular construction a good fit for multifamily development.

Modules are typically delivered to the job site complete with paint, cabinets, appliances and fixtures. Once cranes position them into place, crews make electrical, plumbing, mechanical and structural connections. Sometimes flooring is installed on-site to allow for acclimation. Aside from the off-site construction of its parts, modular housing looks and functions the same as “stick-built” on-site-construction housing.

The hallmark of modular construction is efficiency. With modular construction, work can be done on various parts of the home simultaneously instead of sequentially. “Because construction is occurring off-site in a factory-controlled setting, the modular fabricator can complete the first, second and third floors while the site is being developed,” said Hardiman. “Once the site is ready, a multistory building can be under roof in just a few days.”

In his experience building about half a dozen LIHTC properties, Doug Henriquez of Clayton Building Solutions Inc. said the gap in efficiency between modular and site-built construction has widened. “Years ago, I’d say [the time savings of modular was] 40-50 percent, but nowadays it’s 70 percent,” said Henriquez. “On-site builders cannot build on the timeline they used to be able to, due to lack of talent and lack of labor force.” Henriquez said that the labor force for construction is down 10 percent compared to 10 years ago, with some states seeing a dip of as much as 15 percent. 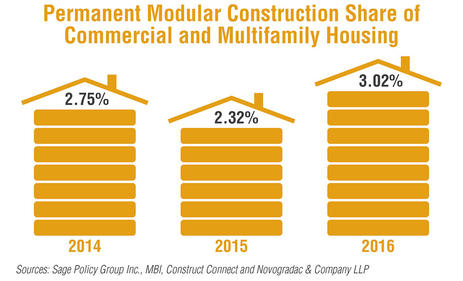 In addition to time and cost advantages, modular can also be a competitive advantage for LIHTC developers in states where allocating agencies award application points for efficiency or building innovation. BRIDGE Housing’s Parker said that modular developments are shovel-ready, which can help them score points for innovation on the California LIHTC application. MassHousing, the allocating agency for Massachusetts, specifically names modular construction as an example of a cost-effective building approach that could be considered under the design section of its LIHTC application.

Because modular construction in LIHTC development is relatively new, early adapters are still developing best practices. U.S. Bank’s first LIHTC investment in modular construction is BRIDGE Housing’s San Leandro Senior Apartments. The 109 modules that will be used for the building are being manufactured more than 600 miles away–in Boise, Idaho.

Quality control for off-site construction was an initial concern for U.S. Bank, which typically hires a consultant to conduct monthly site visits for traditional construction developments. Brooke Bright, a construction underwriter for U.S. Bank, said she was reassured of the modules’ quality when she visited the Boise factory and witnessed the level of oversight. A state of California inspector and two independent inspectors were there to evaluate the process.

Another underwriting concern for U.S. Bank was the risk of transportation and storage of the modules before installation. Bright worked with insurance experts to create a model under which responsibility for the modules was placed on the manufacturing company during construction, then on the trucking company during transportation and finally on the general contractor upon delivery. Modules are individually wrapped in two layers of weather-resistant plastic, which allows them to be stored safely in a secured lot near the construction site until installation. “This is an example of how we at U.S. Bank embrace innovation and change,” said Bright. “It took a lot of teamwork.”

Henriquez advises developers considering modular for the first time to make sure that all parties involved understand exactly how modular differs from site-built construction, on everything from risk to cash flow. “When a developer looks at the timeline for a project and runs the net present value and expected return on investment, they must look at the absolute start and finish of the product, from design all the way through 90 percent absorption,” said Henriquez. “The cash flows are very different–[modular] allows them to absorb their product more quickly so they have rental receipts in half the time.”

As a cost-saving measure, Henriquez suggests that developers work closely with the modular manufacturer and general contractor from the beginning to outline roles and expectations. Henriquez said that initial estimates for how much work general contractors need to do to install modular housing can be inaccurate if parties assume that modular requires the same amount of work as site-built construction.

The Housing Authority of the County of San Bernardino (HACSB) last year completed its first demolition and modular rebuild, turning an old public housing site into Valencia Grove, a 4 percent LIHTC property in Redlands, Calif. Gus Joslin, HACSB’s deputy executive director, said that Valencia Grove was a good learning experience. The development was originally intended as site-built construction, but converted to modular in the process. Joslin said changing construction methods midstream created timing and cost issues that wouldn’t have happened if HACSB started with modular. “We’re certainly looking at doing [modular] again,” said Joslin. “It’s imperative from Day 1 to start as modular construction–by doing that, you’re going to save a lot of both time and dollars.”

“Because the technology is so new, it’s not talked about very much in the industry,” said Bright. She said research exists to corroborate the safety of modular housing, but she expects affordable housing practitioners will need more data and proofs of concept before modular construction is embraced on a larger scale.

“I can see more investors getting on board, but a lot more research needs to happen,” said Bright. “What’s great is that you have an investor that is already ready to leap into this new technology. It’s just going to be a slow progression just because people want to know that it’s safe–they want examples that it’s safe. People want to see a building standing for 10 to 30 years and see it stand in an earthquake or hurricane and see people get out safely. It’s coming, but in slow progression.”

Parker agrees: “As additional successful examples of modular come online, and as developers, architects, general contractors and lenders get more comfortable with the technique, I think we will see an increase in the number of affordable homes that are built using modular construction.”

As modular manufacturers slowly scale up their production capacities, Henriquez expects to see modular account for a greater share of new construction. “There’s no question in my mind,” said Henriquez. “It’s the better way to build, as far as construction quality, consistency and speed to market.”