The Current: Codification of the “Economic Substance Doctrine” — What Does it Mean for Energy Tax Credit Transactions? 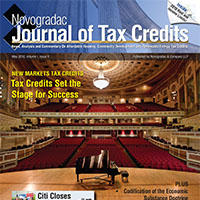 Some government policy makers thought there should be a uniform standard—often referred to as the “economic substance doctrine”—and in March 2010, the doctrine was adopted as part of the Health Care and Education Affordability Reconciliation Act of 2010 (the 2010 Reconciliation Act) in Section 7701(o) of the Internal Revenue Code of 1986, as amended. The new law is effective for transactions entered into after March 30, 2010.

The new law consists of two parts: application of the economic substance rule, and a penalty that affects the cost that a taxpayer may incur from entering into a transaction that fails the test.

The penalty applies if a tax credit transaction is found to not have “economic substance.” Of course, some or all of the credits and related deductions will be disallowed. In addition, one of two levels of penalty will apply: a 20 percent penalty if the transaction is disclosed on the taxpayer’s return, and a 40 percent penalty if it is not. For disclosed transactions, this is no worse than the substantial understatement penalty, so the new rules may not actually yield larger penalties in most situations.

The application of the economic substance rule is a three-part test, as follows:

The Joint Committee on Taxation prepared a technical explanation of these provisions. That explanation provides that codification of the economic substance test is not intended to change current law standards in determining when to use an economic substance analysis, or to alter the tax treatment of certain basic business transactions that under longstanding judicial and administrative practice are respected, merely because the choice between meaningful economic alternatives is largely or entirely based on comparative tax advantages.

Importantly, a significant footnote was included in the technical explanation. Footnote 344 says:

If the realization of the tax benefits of a transaction is consistent with the Congressional purpose or plan that the tax benefits were designed by Congress to effectuate, it is not intended that such tax benefits be disallowed. See, e.g., Treas. Reg. sec. 1.269-2, stating that characteristic of circumstances in which an amount otherwise constituting a deduction, credit, or other allowance is not available are those in which the effect of the deduction, credit, or other allowance would be to distort the liability of the particular taxpayer when the essential nature of the transaction or situation is examined in the light of the basic purpose or plan which the deduction, credit, or other allowance was designed by the Congress to effectuate. Thus, for example, it is not intended that a tax credit (e.g., section 42 (low-income housing credit), section 45 (production tax credit), section 45D (new markets tax credit), section 47 (rehabilitation credit), section 48 (energy credit), etc.) be disallowed in a transaction pursuant to which, in form and substance, a taxpayer makes the type of investment or undertakes the type of activity that the credit was intended to encourage. [Emphasis added.]

Accordingly, it appears that transactions that feature the typical tax credits generally will not be subjected to economic substance analysis.

Furthermore, the footnote refers only to “tax credits” not being disallowed; it does not indicate what the treatment should be for related tax items, such as depreciation or interest expense. Finally, there are the transactions that involve Section 1603 grants, but not Section 48 credits. Should these transactions benefit from their similarity to the list of credits enumerated in footnote 344?

We should expect that the typical Circular 230 compliant tax opinion will now feature a discussion of how the investment complies with the rules of new Section 7701(o).  It should be noted that some have expressed concern about relying on a footnote in a technical explanation to give a tax opinion, but this seems unlikely to be a problem.  Both case law and Treasury regulations give a fair amount of respect to explanations prepared by the Joint Committee on Taxation.  Relying on the footnote, presumably, a project that establishes and operates a renewable energy facility to save energy resources in compliance with the congressional objective to reduce America’s reliance on conventional fuels, should demonstrate consistency with the congressional purpose or plan.

Still, analyzing the building of a renewable energy facility in this way does not address the actual business deal, which is where the comparison of economic with tax benefits really matters. For example, even if the facility itself is consistent with congressional purpose, a transaction with unreasonable fees or loans, or one that simply pushes the envelope by adding more parties, fees, guarantees, exit strategies or other arrangements, could lead to higher scrutiny under the economic substance doctrine. Such features might “distort the liability of the particular taxpayer,” as contemplated by footnote 344. Plainly, sensible guidance from your professional tax advisor continues to be very important.

Finally, query whether “cash on cash” distributions now made in some renewables transactions are still required. Even without them, the transaction continues to be consistent with the congressional purpose of generating renewable energy. As of now, the tax community seems to be taking the position that the passage of the economic substance rules was not intended to lessen the standards that applied before the test became law, but this may change as the marketplace adopts to the new rules and Treasury (hopefully) issues guidance.

Fortunately, it appears that the passage of the economic substance legislation poses a somewhat smaller risk to the tax credit community than was first feared. Nonetheless, careful scrutiny of each transaction is important in order to maintain tax benefits and avoid penalties.