The Current: Does Small Wind Guidance have Implications for Other Renewables? 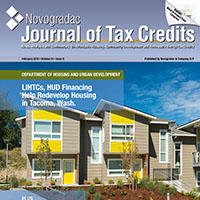 Section 48 of the Internal Revenue Code (Code) is most associated with the investment tax credit (ITC) for solar, but it also provides credits for almost all renewables, including one that we’ll focus on here, the 30 percent credit for “qualified small wind energy property.” Despite this focus, even if you are not an investor or developer of small wind facilities, you should keep reading.

Maximum Nameplate Capacity
Pursuant to Section 48(c)(4), qualified small wind energy property is property that uses a wind turbine that has a “nameplate capacity” of not more than 100 kilowatts. There’s no official Internal Revenue Service (IRS) definition of “nameplate capacity,” but it is generally considered to be the instantaneous maximum power output of the facility, as specified on the manufacturer’s nameplate attached to the turbine. Unlike the credit’s big brothers, the wind production tax credit (and the wind ITC that can be elected in the alternative), which provides a credit for any size of wind turbine, provided the facility began construction before 2015, a small wind facility is required to be placed in service before 2017, regardless of when construction began.

Additional Requirements to Qualify for the Credit
The Code provides additional requirements that must be met for a facility to be considered qualified small wind energy property. Section 48(a)(3) requires that the facility meet performance and quality standards, “if any,” which have been prescribed by the Secretary of the Treasury by regulations (after consultation with the Secretary of Energy) and are “in effect” at the time of the acquisition of the property.

New IRS Notice
In just-published Notice 2015-4 (Notice), the IRS has detailed how a wind facility can meet these requirements. Interestingly, although the notice recites the Code’s reference to “regulations … in effect at the time of the acquisition,” it makes no effort to reconcile the statutory requirement that there be a “regulation” with the IRS’s use of a mere notice to announce these standards. This leaves one wondering whether a taxpayer might fail to meet the tests of the Notice and yet still be entitled to the credit, presuming that it was cost-effective to challenge the IRS’s rules. While the IRS has occasionally used notices or similar publications to announce what will ultimately appear in regulations, the IRS did not make such a statement in the notice. It simply announced the tests and didn’t mention the term “regulations” again. Regardless of what the IRS did in the notice, the Code itself requires that “regulations [be] … in effect.” Thus, this requirement would not be accomplished by a mere notice, whether or not it foreshadowed or referred to an anticipated regulation. All things considered, it seems sensible to try to comply with the IRS’s rules, rather than dispute whether they have complied with the applicable Code provision.

Performance and Quality Standards
In any case, the Notice sets two alternative standards, either of which can be met to establish the required performance and quality standards. The first is the American Wind Energy Association’s Small Wind Turbine Performance and Safety Standard 9.1-2009 (AWEA); the second is the International Electrotechnical Commission 61400-1, 61400-12, and 61400-11 (IEC). The IRS has mentioned external standards in other similar areas, e.g., the “new energy-efficient home credit” of Section 45L. One is always left to wonder what will happen if the standards of the third party become obsolete or have a mistake, but at least manufacturers and taxpayers can easily access these rules and make a sensible judgment about compliance.

Manufacturer’s Certification
The Notice then provides that the turbine manufacturer can enable a taxpayer to establish that these standards, as well as the nameplate capacity requirement, have been met. The manufacturer does this by providing a certification, which can be in printable form on the manufacturer’s website. The certification must include the name and address of the manufacturer; the property name and model number; the name and address of the “eligible certifier,” which is a person who is accredited by the American Association for Laboratory Accreditation or other similar accreditation body; the nameplate capacity of the turbine; and a signed and dated statement by the eligible certifier that the turbine complies with the performance and quality standards of AWEA or IEC. A taxpayer should keep a copy of this certificate with its tax records.

The Notice further provides that a taxpayer may rely on the certificate, even if it is subsequently proven false, provided the IRS had not (i) conducted its own examination and determined that the turbine did not meet the AWEA or IEC performance and qualify standards and (ii) withdrawn the manufacturer’s right to provide a certification before the date the turbine was purchased. Reliance is permitted even if the purchased turbine was not yet installed, or the credit had not yet been claimed. Manufacturers are “reminded” that an erroneous certification can result in penalties for fraud or false statements, as well as aiding and abetting an understatement of tax liability in the amount of $1,000 per return on which a credit is claimed in reliance on the certification. We have seen the IRS similarly call for a manufacturer’s certification in the past. In Notice 2009-41, which applies to residential energy-efficient property, the IRS required that the manufacturer’s certification be made under penalties of perjury, which was not a requirement of the new notice.

Might Similar Rules Apply to Other Renewables?
So, why start with a teaser that suggested this article might be of interest to investors and developers of renewables other than small wind? Here’s why: the Code reference in Section 48(a)(3) to “performance and quality standards” isn’t limited to just small wind. It applies equally to several other kinds of energy generators, particularly solar, as well as qualified fuel cells, combined heat and power systems, and certain geothermal and ground water systems. Of course, in the case of solar and these other technologies, we haven’t seen the IRS publish standards like the AWEA and IEC standards that are provided in the notice. But recognizing that it could impose such requirements, there could come a time when the IRS announces that similar agencies or private testing bodies will be called on to certify solar or other facilities. Some have suggested that this might be a way to limit the use of certain renewable energy products – if the manufacturer refuses or fails to get whatever testing the IRS may require, then that would effectively stop developers from using its products.

With that in mind, keep your eyes open for further standards that might be applied to solar or other renewable technologies. While we haven’t heard of anything that might be in the works, the Code certainly provides the mechanism for such requirements.