The Current: Recent IRS Guidance on the Tax Treatment of Excessive 1603 Grants 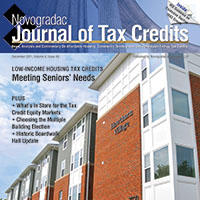 There are two questions that I get a lot with respect to Section 1603 grants: Once I’ve gotten my grant, will there be subsequent questions about the computation? And: How is compliance handled once I’ve placed my project in service?

To analyze these questions, we should first consider some of the fundamental differences between tax credits and grants. One of the most obvious differences is how the benefits are computed. With a credit, the taxpayer does his own good faith computations. Additions to hard costs for things like fees paid to insiders are generally based on market “norms,” (e.g., reasonable percentages and timing for the computation and payment of development fees), and they are sometimes supported by a tax opinion of a tax attorney, especially where an investor is involved. The taxpayer claims the credit on a tax return and (generally) anticipates that no questions will be asked. If there are questions, it’s in an audit context at some point after the facility was placed in service.

On the other hand, with Treasury’s Section 1603 grants, the applicant prepares an application shortly after the facility has been placed in service and gets a review and feedback very shortly thereafter. While there is a certain sense of norms (at least to the extent that the “community” shares information and experience, and occasionally when Treasury shares its “benchmarks,” as it did when it published its price per watt standards for solar earlier this year), in the end, the applicant mostly hopes that Treasury will agree with the expenditures and fees it has included in the computation. As we discussed earlier this year, one applicant has taken Treasury to court over its failure to award any grant, but that is the rare case.

At least that used to be the case. But, times have changed; first, Treasury has reserved the right to audit transactions where a grant has been awarded, and second, for the first time, the IRS has released an internal memorandum indicating how it plans to treat a Section 1603 grant that it considers “excessive.”

It’s easy enough to describe these four rules, but what should you remember?

First, a Chief Counsel’s memorandum is generally the position that the IRS would like to take.  It’s not a statement of law, a “safe harbor,” or anything official. Nonetheless, taxpayers generally follow these internal memoranda, and here, where the memorandum is giving advice to the IRS, it indicates that the IRS thinks it’s worth having some rules about auditing Section 1603 grants, even if they are only for its internal purposes.

Second, the IRS has provided no guidance about what might cause a Section 1603 grant to be excessive. Perhaps it could be because the IRS believes there has been an unusually high price paid for a component or a large development fee paid to an affiliate, even though each met Treasury’s standards at the time the grant was awarded. Or perhaps, with the benefit of hindsight, the IRS now knows that the development fee was never paid, or that the facility is really owned by a tax-exempt or governmental entity. Or, it may be something else altogether. Indeed, the memorandum offers no indication that the IRS will offer deference to the decision made by Treasury.

Third, adjustments to income are generally made when the cash is received or paid back, and not when the IRS completes its analysis and issues an auditor’s report. So, when the IRS computes the resulting tax owed, it will very likely bear interest and perhaps penalties.

Finally, remember that Section 1603 grants require a basis reduction equal to 50 precent of the grant. However, the IRS’ view is that the excess payment, being taxable income, doesn’t cause a basis reduction. Of course, the recipient presumably did reduce basis when its original tax return was filed, thinking that the entire payment received from Treasury was “appropriate.” Thus, the recipient may now have to file amended returns to take advantage of the larger depreciation deduction that applies to its somewhat higher basis in the facility.

This brings us to the kinds of “subsequent events” that could result in recapture.

Like tax credits, grants are subject to recapture for a five-year period, based on a schedule that declines by 20 percent for each year the facility is in service.  For example, 80 percent of the credit or grant is recaptured if the project falls out of compliance more than one year and less than two years after it is placed in service. However, the recapture is necessarily different for credits that it is for grants. A tax credit that reduces a taxpayer’s obligation to pay taxes is recaptured by increasing the taxpayer’s tax liability. On the other hand, recapture of the grant is accomplished by making a payment to Treasury, as a matter of contract.
You may remember that the recapture rules for credits are less forgiving than they are for grants. In particular, if a facility generated tax credits, and is transferred to a new owner during the five-year recapture period, this will generally result in recapture. However, the transfer of a facility that generated a grant generally does not cause recapture unless the new owner is a tax-exempt, government, or other owner that is not eligible for a grant in the first place. And leases to tax tax-exempts and certain other entities can cost a facility its credits, but not its grant.

One last thing to remember is the obligation to file annual reports on Section 1603 grants. This puts an additional burden on a grant recipient to keep track of the relevant information. In fact, whenever a leasing structure is used, be sure that the applicant has access to whatever information may be in the hands of one party, but is required by the other to complete its filing obligations.