The Current: Three Important Rules for Section 1603 Projects that Aren't Placed in Service in 2010 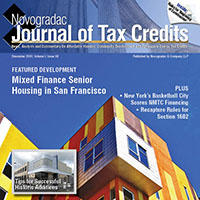 For this month’s Current, I have three short, but significant items for readers to remember.

Proving that Construction Has Commenced
First, Treasury has published guidance on how to seek approval that a project has “commenced construction” in 2010, so that it might be eligible for a grant even if it is placed in service in 2011 or a later year (subject to the actual outside date for energy projects, i.e., end of 2016 for solar, end of 2012 for wind, and end of 2013 for most others; as always, you should check the exact rules for your particular project). That guidance is posted on Treasury’s web site at www.ustreas.gov/recovery/1603.shtml.

Of course, by the time you read this, you may be beyond the Treasury’s ability to review your application and give you a “thumbs up” or a “you better fix this” warning while you still have time to do more, that is, before the end of 2010. Nonetheless, I think it is a very wise idea to go through with your tax advisor the steps provided in the approval process in order to assure that you believe that your project has commenced construction. Moreover, it should be expected that Treasury will want to see all the same paperwork by October 2011 (the deadline for establishing that your project is grandfathered), so you might as well get it together now.

Particularly useful is the “Begun Construction Applicant Checklist,” also available on the Treasury Section 1603 web page. Note that to pass the 5 percent safe harbor, Treasury expects to see “evidence of the costs paid/incurred such as invoices or other financial records,” and a “detailed description of the costs paid/incurred including delineation of eligible and ineligible costs,” a signed statement under penalties of perjury attesting to these records, and a report from an independent certified public accountant (CPA) if the project is expected to have a basis of $1 million or more.

To pass the “Physical Work of a Significant Nature” standard, similar records are required, and note that photographs, although not required will be considered helpful. So, there’s your excuse to get that digital camera you’ve always wanted!

Passing the 5 Percent Test – An Important Note
While it doesn’t appear in the guidance, a Treasury representative responsible for the program has made clear that expenses incurred in 2010 do not have to be allocated to a particular project before the end of the year. Indeed, there doesn’t even have to be an identified project before the end of 2010. So, this means that a solar developer, for example, might incur the cost of $1 million of panels, and then subsequently identify $20 million of projects that will consider these panels to be the 5 percent incurred in 2010.

A few observations: First, the project will presumably have to be identified by the October 2011 deadline in order to be grandfathered into the program. Second, remember that whatever cost you incur has to ultimately be allocable in an appropriately sized “chunk” among your projects. You can’t buy a single turbine for $2 million, and then consider it to be 5 percent incurred on two $20 million projects, even though 5 percent of $40 million is $2 million. A single turbine can be designated for only one project. Of course, this may make certain kinds of projects and equipment more “fungible” for this purpose. For example, the far smaller price of solar photovoltaic (PV) panels will make it easier to allocate an acquisition of panels to more than one project, if desired.

Property Delivered in 2011 -- The Three-and-One-Half-Month Rule
A lot has been made of the three-and-one-half month rule as a way to get some extra time to incur costs after the end of 2010, and yet still have those costs qualify for the 5 percent test. The rule is derived from the regulations under Section 461 of the Internal Revenue Code, which provides certain rules for accrual basis taxpayers. You will remember that an accrual basis taxpayer can accrue an expense for property when the property is provided (Treasury allows this to be delivery or the receipt of title) and similarly, an expense for services when the services are provided. This is why payment is generally not required in order to accrue an expense, but mere payment is generally not enough either.

There are exceptions, and here’s the one that is relevant to this discussion. The section 461 regulations provide as follows:

You may wonder just what the word “payment” means, and the regulations address that question as well:

Payment. The term payment has the same meaning as is used when determining whether a taxpayer using the cash receipts and disbursements method of accounting has made a payment. Thus, for example, payment includes the furnishing of cash or cash equivalents and the netting of offsetting accounts. Payment does not include the furnishing of a note or other evidence of indebtedness of the taxpayer, whether or not the evidence is guaranteed by any other instrument (including a standby letter of credit) or by any third party (including a government agency). [emphasis added].

So, if you are planning to rely on the three–and–one-half month rule, make sure that you have the funds to actually make payment, and be sure that you are counting the months from the date that payment is made!

Forrest David Milder is a partner with Nixon Peabody LLP. He has more than 30 years’ experience in tax-advantaged investments including the tax credits that apply to affordable housing, energy, new markets and historic rehabilitation, as well as the tax treatment of partnerships and LLCs, tax-exempt organizations, and  structured financial products. He can be reached (617) 345-1055 or [email protected].