Demand for NMTCs Hasn’t Wavered One Year After Combined Round 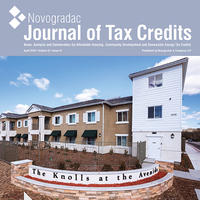 One year after the largest round in new markets tax credit (NMTC) history, community development entities (CDEs) are still hungry.

“When we look at this round, it is very clear that there is a higher percentage of applications that scored very well,” said Brad Elphick, partner in the Atlanta office of Novogradac & Company LLP, of the Round 14 awards announced in February. “This tells me that the quality of applicants is getting better. Unfortunately, what that means for some CDEs [community development entities] is that really good applicants are not receiving an award.”

Bob Rapoza, founder and president of Rapoza Associates and spokesman for the New Markets Tax Credit Coalition, said, “Competition is so keen that it’s very easy to score high on the application and still not receive credits.”

“There was no dramatic change in the CDFI Fund’s focus,” said Matthew Philpott, senior vice president of NMTC and historic tax credit production at U.S. Bancorp Community Development Corporation (USBCDC), which received a $70 million award in the 2017 round. “This application looked similar to the previous year.”

Paul Anderson, director of policy and research at Rapoza Associates, said that in this round CDEs are targeting Georgia, Guam, Indiana, South Carolina, West Virginia and Wyoming, several of which haven’t received much NMTC investment historically.

“The New Markets Tax Credit program is the most effective community development tools for disadvantaged communities,” said TJ Cox, president and chief operating officer at Central Valley NMTC, which has received three awards for $120 million, including $55 million in Round 14. “The program funds high-quality projects across the board. It creates good-paying jobs with benefits that deliver significant community impact. All these projects would not get done but for the NMTC.”

CDEs that received an award are now going through their pipelines and selecting partners. “It’s all about readiness. That is the starting point, getting a project’s money in order,” said Philpott. “Also, it is important that the fit is right. There is a match-making period [while CDEs go through their pipeline].” This is USBCDC’s eighth award for a total of $725 million in allocation authority.

Philpott said USBCDC’s $70 million award could be used to finance the development of 10 to 15 projects. “Our strategy this year is a little different. We have a more specific focus on addressing inequality in communities by investing in quality jobs, accessible jobs and vital community resources,” said Philpott. He noted USBCDC is interested in projects that address disparities in education, health and income for severely distressed census tracts. In terms of accessibility, Philpott referred to reducing barriers that prevent people from obtaining the jobs; barriers such as when the work is not near public transportation or when it requires a higher level of skill or education. USBCDC is looking for companies that provide jobs with training and potential for advancement. “In addition, we will be creating a small QLICI [qualified low-income community investment] fund. In the last couple of years, we built up our capability to help structure small QLICI funds. We have gotten much more efficient with those transactions,” said Philpott.

National New Markets Fund, which received a $50 million award in Round 14, has a different focus.

National New Markets Fund is looking to create high quality jobs and has a strong focus on rural communities. It has provided NMTC allocations to 34 developments to date and received eight NMTC awards for $477 million.

“We had the expertise and track record to underwrite and invest in manufacturing facilities and companies,” said La Franchi. “At the time of the global economic crisis, we witnessed the financing for manufacturers dry up–we were well positioned to help fill this gap.” 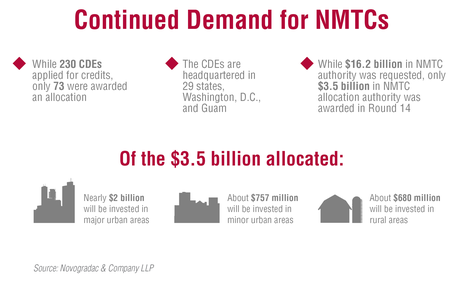 While the industry works to understand the ramifications of tax reform, pricing for NMTCs has taken a hit. “What I am hearing is that pricing may be softening a bit,” said Cox.

“We are seeing market pricing going down, as much as 10 percent,” said David Gibson, senior vice president, NMTC product manager at PNC Financial Services Group, which has made $3 billion in qualified equity investments in NMTC projects. “Time will tell as things shake out if the lower end of pricing will hold.” Gibson said he has seen pricing recently as low as 78 cents per credit and as high as the upper 80s. “Pricing is all over the board. It is not consistent from investor to investor,” said Gibson. He said the NMTC market has fewer investors than other markets, so a handful of investors can drive pricing.

Rapoza is seeing a similar range for tax credit equity, between 78 and 84 cents per credit. “There is still some uncertainty in regards to what tax reform will mean for the industry,” said Rapoza. “Price varies from institution to institution.” Anderson expects pricing may stabilize and come back to the mid 80 cents per credit as it was last year.

“I was hearing pricing may swing down 10 cents, but that was very preliminary,” said Elphick, who added that pricing might not be as low as people initially thought after tax legislation. Elphick anticipates pricing to go down on average by 3 to 5 cents. He anticipates the average price per credit to be around 82 cents. “We are not seeing as large a decrease as some were fearing,” said Elphick.

“Tax reform threw a huge curve ball in to the market,” said La Franchi. “The only thing that is clear to us is that investors all seem to still be assessing their own situation and that pricing is still in flux.”

A new curve ball that most had not even heard of until a few months ago is the BEAT (base erosion anti-abuse tax). The BEAT is a new alternative tax calculation for large corporations–foreign owned and U.S.-based with significant foreign operations–that prevents a corporation from eroding its U.S. tax base through domestic deductions arising from payments to foreign affiliates.

“It is possible that the uncertainty around BEAT is affecting pricing,” said Gibson. He added however, that he is not seeing any actual evidence that the BEAT is having a material impact on investors’ overall demand for NMTCs.

“The uncertainty around tax reform and overall tax liability for some investors does seem to be impacting the NMTC market currently,” said Gibson. “That uncertainty is having an effect on demand, and therefore pricing as investors weigh NMTC investments against other investment opportunities.”

La Franchi said that some investors are losing their appetite for NMTCs because the corporate tax rate went down, while other investors are still very active in the NMTC market.

Elphick expects the 2018 NMTC application round will likely open in late April or early May. Elphick has heard that the Round 15 application will be substantially the same as the version that was released for public comment last summer. Anderson said the minor changes to the 2018 round application include questions on fees and the narrative section will be divided up differently.

“Give the CDFI Fund credit for trying to keep pace with the notice of allocation authority,” said Philpott. However, while La Franchi is excited to get going on the Round 15 application, she noted that the very close proximity of the award announcement to the application release certainly creates a hectic time for CDEs. La Franchi said, “We’ve laced up our sprinting shoes!”

The NMTC program is funded at $3.5 billion per year through the 2019 round. “It is important that CDEs really get out there and tell Congress how effective the program is,” said Cox.