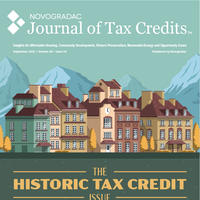 The COVID-19 pandemic has had a varied effect on the historic rehabilitation community.

“We are closely working with projects that should have closed in the middle of 2020, but are getting delayed six, 12 and 18 months, while other projects have picked up steam,” said Hoopengardner. “It varies by asset class and location.” For example, NTCIC invested in a historic school building that is being used by a charter school. That transaction was supposed to close by the end of 2020, but is now looking to close by the end of this quarter.

In addition to construction delays caused by COVID-19, Hoopengardner said the HTC market is also affected by increasing costs. “Anyone with active projects at the onset of COVID-19 struggled to get operational. [These cost overruns] tapped into developer liquidity.”

Jonathan Leit, director of Alembic Community Development, a mission-driven developer that partners with nonprofits to build community facilities and affordable housing using HTCs and other tax incentives, said operations have become a challenge as a result of the COVID-19 pandemic.

“Operations have been tough,” said Leit. “We lease to a lot of nonprofits and entrepreneurs who are dependent on earned revenue that has substantially dried up. Vacancies at our coworking spaces went from 20% to 80% at the height of the pandemic’s occupancy restrictions.”

“Community facilities and the hospitality industry have been significantly impacted by operational issues,” said Hoopengardner.

Labor is another concern facing the HTC community.

“Post-COVID, the labor market is making it hard for some restaurants to be open enough to make a profit and stopping new concepts from opening, and the financing environment for retail is preventing new concepts from opening unless the developer provides the financing,” said Bobby Maly, CEO of The Model Group, a developer that specializes in historic adaptive reuse for community revitalization in Ohio, Kentucky and Indiana that has completed more than 300 historic rehabilitations.

Despite these challenges, developers are moving forward.

“In 2020, transactions already in closing were largely successful in moving forward despite the pandemic,” said David Gibson, senior vice president and manager of the historic and new markets tax credit (NMTC) practices for PNC Tax Credit Solutions Group, a PNC Real Estate business. “Lenders and investors placed a much higher level of scrutiny on the budgets, sources of materials, projected operating performance and sponsorship. However, newer opportunities were slower to come to fruition as lenders tightened underwriting requirements and focused on existing asset performance for a time. This spring, we saw market participants slowly return and deal volume and average equity size continue to improve.”

NTCIC closed a large hospitality investment in Los Angeles in July and last February, NTCIC financed the rehabilitation of a historic theater in Boston. Hoopengardner said the pandemic provided a unique opportunity to rehabilitate the historic theater while it was shut down due to COVID-19.

The Model Group and The Alexander Company have also been active during the pandemic.

“We are moving forward–most of our projects are residential heavy with first-floor retail,” said Maly. “[However,] I see office and hotel developers sitting pat.”

“We are not sitting back,” said Joe Alexander, president of The Alexander Company, a family-run developer that has developed more than 6,000 housing units with about 1,500 units still under management/ownership, comprised mostly of adaptive reuse of historic structures. “In 2021, we stabilized 101 units in Milwaukee and 220 in Greensboro, North Carolina. We are looking at smaller and secondary markets, but it’s harder to find larger projects.”

While PNC has seen a slower return of the hospitality market, it has had success investing in market-rate multifamily developments using HTCs.

“What we’ve continued to experience in hospitality, whether it be short-term rentals or a conventional flagged franchise, is that it remains challenging. We are just now starting to see improving average daily rates and occupancies in a number of markets, especially in the leisure segment,” said Gibson. “Market-rate multifamily has been a consistently strong segment of the HTC market. We have also had great success in the past year with commercial community-oriented properties. Given the current slowdown in hospitality and the continued demand for the historic tax credit, competition for larger quality multifamily transactions remains high.”

“We work with large institutional investors and they want to see new deals, so that’s encouraging,” said Hoopengardner. “Small five-year credit deals are on one end and large one-year deals that are still left  are on the other end of the [tax credit equity pricing] spectrum. There is at least a 15-cent gap in the price per credit in that range. We don’t do a lot of super small stuff. Small deals are in the high 60s to low 70s and larger deals are in the mid to high 80s.”

Maly is seeing pricing from 80 cents to 86 cents per credit. “Post-tax reform, pricing has been lower, but stable–even through COVID,” said Maly. “We have still found several CRA-motivated institutions that have protected pricing somewhat.”

Alexander is seeing HTC equity pricing around 85 cents per credit.

“We haven’t seen pricing being a big obstacle,” said Leit, who is seeing the price per credit in the high 70s. “If the deal is attractive, the pricing is there.”

“Throughout the COVID-19 pandemic, development activity has been remarkably steady,” said Gibson. “Equity is still quite prevalent in the market and lenders appear more willing to issue new construction debt commitments. Closings are still taking a little longer than normal as developers work through budgets and construction contracts with a finer tooth comb, but activity remains strong.”

While the federal HTC equity market remains stable, Alexander does all he can to bring in additional subsidy. “State HTCs are so important alongside the federal credit,” said Alexander. “[In addition to state HTCs,] we pair HTCs with LIHTCs a lot.”

The HTC community is still eagerly waiting to see what happens with the Historic Tax Credit Growth and Opportunity (HTC-GO) Act.

“The HTC-Go Act, if successful, would likely provide a significant boost to those smaller rehabilitation projects that greatly need the extra subsidy to move forward, especially in an environment where increased construction costs remain a concern,” said Gibson. “So, we are continuing to monitor these pieces of legislation closely.”

“For the next six to 12 months, HTC equity pricing looks fairly stable,” said Hoopengardner. “Hopefully by then, the HTC-GO Act will pass, which will make the credit more attractive. Waiting for this legislation to pass is not holding people back, but the content of the legislation could make projects more viable.”

Maly expects the HTC-GO Act and increasing corporate tax rates could impact the future of the industry.

“[The HTC-GO Act] would be a massive impact to the community development work we do,” said Maly. “Obviously, we are [also] watching if corporate tax rates go up, which would help HTC appetite.”

Even though the COVID-19 pandemic has created challenges, the HTC industry is moving forward.

“While our CRA needs will always play a role in how we evaluate potential transactions, PNC continues to invest in historic rehabilitation projects nationally,” said Gibson.

ESG Investing: Where it is Now; Where it’s Headed; What to Do
Historic Tax Credit Direct and Lease Pass-Through Transaction Structures
Transactional Structural Challenges Faced While Pairing HTCs and OZ Incentive
END_OF_DOCUMENT_TOKEN_TO_BE_REPLACED