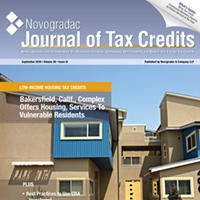 Massachusetts Gov. Charlie Baker signed comprehensive economic development legislation  into law on Aug. 10 that includes a proposal advanced by Boston nonprofit Preservation of Affordable Housing (POAH) and a coalition of housing advocates for a donation tax credit to encourage more affordable housing in that state.

An Act Relative to Job Creation and Workforce Development (H. 4569), provides up to $1 billion in new investments in communities, workforce training and innovation across Massachusetts.  The act’s donation tax credit (DTC) provisions create a new option for the use of the existing Massachusetts Low Income Housing Tax Credit (LIHTC), expanding the impact of that resource.

The DTC will provide a credit against Massachusetts income tax liability for property owners who donate existing housing properties–or other structures for conversion to housing–to qualified nonprofits that commit to long–term affordability. For most owners, the federal charitable deduction alone is not sufficient to make donation economically viable, compared to the after-tax proceeds from sale. Adding the DTC–worth 50 percent of donated value–will tip the balance in favor of donation for many owners, allowing them to secure fair value for their property while ensuring it can also serve as long-term affordable housing.

From the state’s perspective, the donation structure significantly reduces the subsidy required to make a given affordable housing transaction viable–allowing the state to fund more units or reinvest in deeper affordability.

The Massachusetts DTC is modeled on successful, longstanding DTC programs in Illinois and Missouri. The Illinois program, for example, has made possible the creation or preservation of nearly 18,000 housing units since 2001, catalyzing development activity worth nearly $3.3 billion. The Massachusetts state LIHTC is itself an extremely successful precedent–and the DTC would be an enhanced and more targeted variant of the state LIHTC. Massachusetts already has two donation credit programs that operate under the same principles, targeting community development corporations and land conservation.

The DTC concept attracted broad-based support over the past year, with a growing coalition of housing advocates and providers building awareness and support for the proposal. In June, a DTC policy brief submitted by POAH was selected as “the most innovative, viable and sustainable solution to create new affordable housing units in the state,” by Home Funders, a Massachusetts collaborative focused on addressing housing needs of families with very low incomes at the conclusion of its first “Innovation Competition.”

The DTC has had strong support in both chambers of the state Legislature. In the House, Rep. Kevin Honan and Rep. Jay Kaufman were critical early proponents and translated the concept into legislative language. On the Senate side, Sen. Linda Dorcena-Forry and Senate Majority Leader Harriette Chandler, co-chairwomen of the Special Senate Committee on Housing, endorsed the DTC in their Committee’s report, “Facing the Massachusetts Housing Crisis.”

Chandler ultimately introduced the DTC as an amendment to the economic development bill (H. 4569). Her amendment was adopted and the DTC was included in the final conference version of the bill adopted by the legislature in the closing hours of its session, July 31.

The DTC program will be implemented and overseen by the Massachusetts Department of Housing and Community Development, which will likely deploy this new resource through its normal competitive processes.

Andrew Spofford is POAH’s chief of staff, responsible for coordinating and promoting the CEO’s internal agenda, and is responsible for formulating and advancing POAH’s external public policy agenda. He has served in a range of roles at POAH, including as a project manager in development and as vice president for policy and strategic planning. He was instrumental in POAH’s receiving a $30.5 million grant under HUD’s Choice Neighborhoods Initiative to support the revitalization of the Grove Parc Plaza Apartments and the surrounding Woodlawn community on the South Side of Chicago.

POAH is a nonprofit developer, owner and operator of nearly 9,000 affordable homes in 9 states and the District of Columbia. POAH’s primary mission is to preserve, create and sustain affordable, healthy homes that support economic security and access to opportunity for all.