There was no guarantee it would work, but two years after the Housing Authority of the City of El Paso (HACEP) started a pioneering use of the U.S. Department of Housing and Urban Development’s (HUD’s) Rental Assistance Demonstration (RAD) program, HACEP reached a major milestone.

Phase I is done.

Nearly 1,600 public housing apartments were renovated through low-income housing tax credit (LIHTC) equity and moved to Section 8 contracts. The full conversion of all 6,300 HACEP homes–which house about 6 percent of the El Paso, Texas, population–is on track.

“This has been a very difficult and exhilarating transformation,” said Gerald Cichon, chief executive officer (CEO) of HACEP. “We’re very satisfied with getting through the first phase because it’s proven the concept that we can do it financially and physically.”

On May 5, HACEP and its partners celebrated the official completion of the first phase of the largest RAD initiative in the United States: 1,590 apartments across 13 properties. In addition to the RAD development, two properties that included the reconstruction of 294 homes were concluded. The goal is to revitalize HACEP’s housing portfolio by 2020. There have already been 2,500 family moves, 500 jobs created and more than $550 million invested.

Nick Hoehn, a partner in Novogradac’s Austin, Texas, office, who worked on the transaction, sees this as a landmark. “HACEP and its partners took a new program and showed how it can work,” Hoehn said. “Their success is testament to their commitment and passion to housing. This development shows how RAD can be leverage through a public-private partnership, even on this large a scale.” 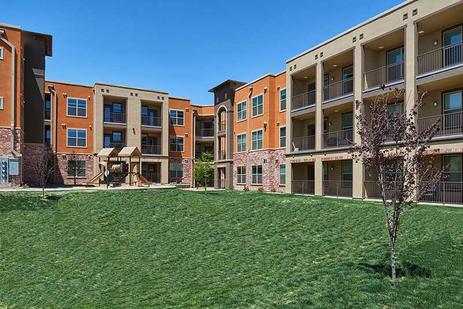 Image: Courtesy of Housing Authority of the City of El Paso
Residents of El Paso public housing began moving back into updated and improved apartments this spring.

Road to the Start

Not long after HUD announced the RAD initiative in 2012, HACEP got on board.

“HACEP really went all in and submitted for its entire portfolio to be converted,” said William Teschke, director of Alden Capital Partners, syndicator of the LIHTCs to three investors, who combined to provide more than $76 million in equity for the rehabilitation. “They were awarded 10 percent of the first 60,000 units allocated nationally under RAD.”

The project was split into three tranches, with the first including 1,590 apartments. Hunt Companies–which included Alden Capital Partners at the time–became the co-developer and syndicator.  Alden became independent of Hunt in 2015.

The RAD program was new for everyone.

“There were a lot of things,” said Robin Vaughn, president of public infrastructure capital markets at Hunt Companies. “We were pioneering and it was the largest RAD development that happened. It was the first for the lender, syndicator, housing authority, everyone.”

The biggest hurdle was relocating residents. The apartments were at 98 percent occupancy–and many residents were elderly, disabled or both.

“We had to move 1,590 households, some of them twice,” Teschke said. “HACEP had a really good relocation team. That was one of the most impressive things. They hired the right people and created their own software to handle the complexity of all the moves. Relocation is always one of the biggest questions and concerns for investors on a project like this, but HACEP was well-prepared to handle it on a large scale. They deserve kudos for that.”

Cichon said it wasn’t as simple as just moving people around. He cited such things as proximity to needed services and schools, residents who had caretaker relatives nearby and physical challenges with moving to a new property.

“Our biggest innovation was creating a customer service model that creates a list of vacancies and addresses, along with human need,” Cichon said. “We created our own software and had to gather information–schools, who in the family cooks, locations of bus routes and hospitals, occupied and unoccupied units and more. We had to create software surveys and overlays so we could put people in the right units. The logistics are significant. We couldn’t find any maps like that, other than natural disaster areas.”

There was also the challenge of fulfilling the requirements of the LIHTC and HUD programs.

“There are conflicting regulations with RAD and the tax credit program,” Vaughn said. “In public housing, residents have the right to return, regardless of income. But, LIHTC rules conflict with that [due to income restrictions]. You also have a situation where existing residents have accessibility needs, unit-size requirements–meaning the number of bedrooms and a right to return. In some instances, the LIHTC rules required us to change the bedroom mix of the accessible units. So the challenge becomes how to accommodate residents with a right to return when the unit size they require no longer exists at their property as an accessible unit.”

Despite those hurdles, the challenging preparations went off with few hiccups.

“There hasn’t been one complaint to city officials,” Cichon said. “And I’ve only handled a handful of complaints myself. The relocation team members have social service backgrounds, so from the resident perspective, it’s been very successful.”

Relocation wasn’t the only issue.

Teschke said talks with HUD were sometimes complicated. “Combining this many properties into one transaction was new for everyone. We had prepared one ground lease for all 1,590 units and then HUD asked us to do 13 [one for each property],” Teschke said. “There were just a lot of aspects that were difficult to navigate.”

And, there was a large number of people involved.

“The other thing that was important to us was the weekly conference calls,” Vaughn said. “That involved the whole team going over the status. There were sometimes 20 or 30 people: the lender, syndicator, architect, housing authority, contractor and more.”

The contractor was Moss and Associates, the architect was Fugleberg Koch, civil engineering was done by SLI and the ADA design was performed by Fokus on Architecture. 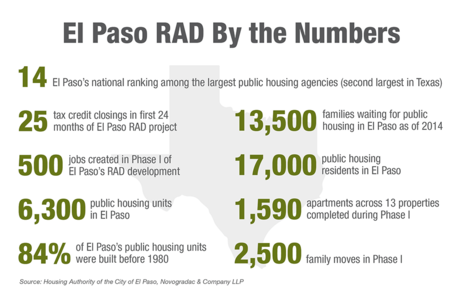 Completion of the first phase came with plenty of lessons.

“It’s great for everyone involved to now be able to say that the project has been successfully built,” Teschke said. “We’re all glad to have been a part of it. For Alden, having our name attached to this project helps position ourselves as a syndicator with RAD expertise and experience in structuring large and complex transactions.”

Vaughn said the process was complicated, the results good. “The final product looks as good as or better than expected,” Vaughn said.

In the RAD world, HACEP and its partners are rock stars.

“It’s not just calls here, it’s that when we go to industry events, we get swamped,” Cichon said. “We’ve probably had 20 housing authorities come out in the past 20 months to meet with our staff, maybe seven to 10 people at a time. And we also get a lot of phone calls.”

Some of the lessons for HACEP were unique to its role as a pioneer.

“You need to have partners that have either done it or are intuitive enough to come up with solutions,” Cichon said. “We had to find people who were innovative. That’s why Hunt and Alden were great. The other learning thing is the amount of touch and communication you need with the community.”

With the first phase complete, HACEP and its partners are shifting new-construction apartments into the RAD program and preparing to renovate the final 3,000 apartments in a phase that will run through 2020, create an additional 500 jobs and bring the investment to $1.3 billion.

Cichon said a change in how Texas awards LIHTCs played a big role.

“For the first 1,600, we had to wait until the tax credits are awarded in August to close. But they changed the state law to allow multiple closings during the year,” Cichon said. HACEP completed 25 tax credit closings in the first 24 months of the program and has six more due before the end of 2017.

The result is a new role for the agency.

“We took a government entity and reduced staff by 50 percent to operate efficiently–but we still have to meet the needs of our clients,” Cichon said. “We shifted to a lean organization that runs as lean as a private entity. That was a significant change, to reduce staff and change the mindset.”

That change will continue.

“In the next five years, [HACEP is] going to be a completely different business entity,” Cichon said. “Instead of being an agency that receives taxpayer funds to house low-income people, we’ll be a producer that provides housing on our own income stream without taxpayer assistance. Our plan is to grow in strength financially.”

The goal shifted, too.

“We’re trying to think about what we can do to have a positive economic impact on El Paso,” Cichon said, citing a 17-story high-rise building HACEP will renovate using historic tax credits as an example. “We want to take low-income housing to higher-opportunity areas, then allow us to be drivers of economic change. RAD is the journey, not the final product. The final product is you have money to innovate for opportunities. It stabilizes the housing problem and allows investment in the future.”

The pioneers of RAD are moving toward the next stage. 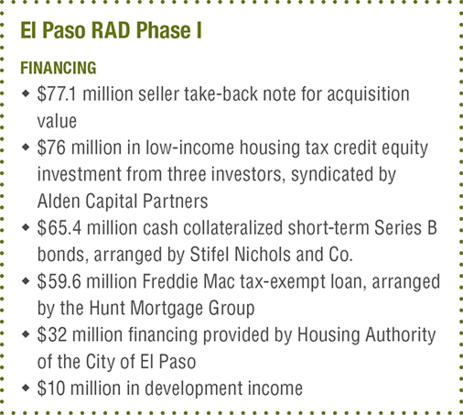