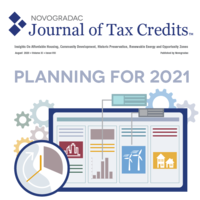 While the bill has virtually no chance to clear the Senate in its entirety, it is a significant step toward getting many included provisions enacted into law.

The legislation creates opportunities for the rest of 2020 and may preview 2021 for Congress.

After months of discussions, House Democrats introduced and passed the Moving Forward Act by a 233-188 vote.

The 2,309-page, $1.5 trillion bill includes a menu of provisions, including a major expansion of the LIHTC and making the NMTC permanent at an expanded level with an inflation adjuster and supplemental allocation for the 2019-21 rounds. The bill would also increase the federal HTC percentage for five years.

Those are the highlights. Broadly speaking, the Moving Forward Act would provide extensions and expansions to all of the major community development tax credits–as well as creating the Neighborhood Homes Credit worth up to 35 percent of eligible development costs for building or rehabilitating owner-occupied, single-family homes in distressed communities.

After passing the House in a party-line vote, the bill is presumed dead in the Republican-controlled Senate and President Donald Trump said he would veto the bill if it somehow passed.

What Does this Tax Provision Cost?

Revenue estimates of the effects of a tax provision are generally needed before Congress will act. Lack of a revenue estimate for a particular provision can prevent that provision from being included in legislation moving through Congress.

Any member of Congress may ask the Joint Committee on Taxation (JCT) to provide a revenue estimate for a bill or a tax proposal and the JCT gets many requests. Public estimates of the effects of a bill often must wait until the proposal is being considered by the tax-writing committees or is legislation that will be voted upon by either chamber. The Moving Forward Act was scored by the JCT and the figures were made public. Thus, we know the current JCT estimate for each community development tax credit provision.

For instance, the JCT places the cost of a permanent 4 percent LIHTC floor at $7.5 billion over 2020-29. Having that estimate will make it simpler to include that provision–generally considered the top request for affordable housing advocates–in future legislation.

Now that so many community development provisions are passed these two hurdles, what is possible in 2020 or 2021?

Portions of the Moving Forward Act–for instance, a permanent 4 percent LIHTC floor, permanence for the NMTC or any of the other myriad provisions–could be added to other legislation this year.

There are a few obvious potential vehicles.

The surface transportation law that expires at the end of September will need to be extended and may provide opportunities for community development provisions. Whether it’s a long-term solution or a short-term bill that delays highway funding decisions until after November’s general election, provisions in the Moving Forward Act could be part of the surface transportation reauthorization bill.

There are other options. Future COVID-19 relief legislation is a possible vehicle, as is a year-end tax bill.

A tax bill is almost certainly coming in 2021 and many provisions of the Moving Forward Act are candidates for inclusion.

There are multiple possibilities, depending on which party has power after November’s election. If Democrat Joe Biden defeats Trump (in mid-July, Biden had nearly a 10-percentage-point national lead), there could be a sweeping tax bill, particularly if Democrats also take control of the Senate and retain control of the House.

A tax bill is also likely if Trump is reelected. While tax legislation in a second Trump term wouldn’t be as sweeping as the Moving Forward Act, many of the provisions have bipartisan support.

The provisions are included in a bill that has been introduced, passed by the House and scored by the JCT. They’re teed up for future legislation.

OZ expansion or reporting provisions could be added to a 2021 version of the bill, as could infrastructure credits, such as those from the Move America Act. Absence from the Moving Forward Act didn’t help OZs or infrastructure tax credits, but doesn’t rule them out, especially in the Senate.

Being left out of the Moving Forward Act makes it less likely they’ll be tagged onto a 2020 bill, unless those provisions are introduced and scored in other legislation.

While the Moving Forward Act as a whole won’t pass during this session of Congress, the introduction and passage in the House of Representatives is significant.

At minimum, affordable housing, community development, historic preservation and renewable energy provisions in the bill cleared significant hurdles and are candidates to be added to upcoming bills.

At most, the Moving Forward Act provides a preview of a how a Biden administration and Democrat Congress could govern in 2021.

The Moving Forward Act’s name reflects the value of the legislation to the community development world: Even without passage in 2020, the provisions are moving forward.