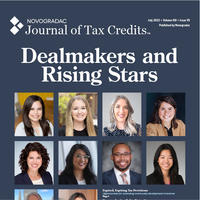 However, myriad moving parts–a possible budget reconciliation bill, midterm elections, a lame-duck session, the 2024 presidential election, a series of major provisions that expire in 2025–play a role in when and whether tax extender legislation could pass.

A January 2022 report by the Joint Committee on Taxation identified 40 federal tax provisions that expired at the end of 2021 and another 45 that will expire over the next four years. Those include a four-year expansion of 9% low-income housing tax credit (LIHTC) allocation, the new markets tax credit (NMTC) at $5 billion annually and numerous clean energy tax incentives, as well as such things as current income tax brackets, the child tax credit, Affordable Care Act insurance assistance, the qualified business income deduction and bonus depreciation.

For community development stakeholders, the question is when the volume of expired and expiring provisions reaches a critical mass that forces action by Congress. It could be this year. Congress could wait until 2025. Congress could act somewhere between. The number of moving pieces makes the timeline unpredictable, including perhaps most conspicuously the on-again, off-again possibility of a partisan budget reconciliation bill.

Of the 40 tax provisions that expired at the end of 2021, several were green energy incentives such as the beginning-of-construction deadline for renewable energy facilities to claim the production tax credit (PTC) or investment tax credit (ITC) in lieu of the PTC. Other incentives that expired in 2021 included a 12.5% annual increase in LIHTC allocation and the Section 45L new energy-efficient home credit of up to $2,000 per unit in residential buildings of three or fewer stories, which was often used by LIHTC developers. 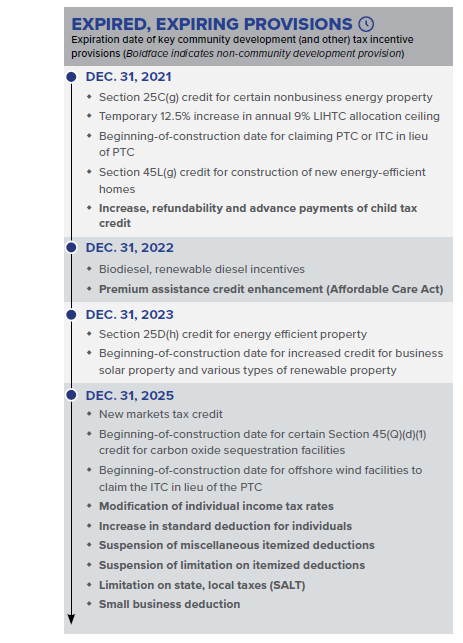 The most politically charged provisions to expire were the increase in the child’s tax credit from $2,000 to $3,000 (or $3,600, depending on the child’s age), increased refundability thresholds, and the ability to claim monthly advanced child tax credits. The addition of this set of provisions to the Build Back Better Act and their associated cost was one of the reasons Sen. Joe Manchin, D-West Virginia, refused to support the bill, thereby sinking its chances.

Another four provisions are set to expire this year, including subsidies for the Affordable Care Act’s insurance marketplaces. That expiration could have major implications for Democrats in the midterm elections, as middle-class households in key states claiming premium tax credits could see their premium costs increase significantly. Two other expiring provisions that have strong regional support–the railroad track maintenance credit and various incentives for biodiesel and renewable diesel.

In 2023, three more renewable energy provisions are set to expire.

Then comes the avalanche of 2025, when a change in individual tax brackets, a limitation on the deduction for state and local taxes, and the NMTC are among the 36 expiring provisions, along with the full phaseout of bonus depreciation and expensing.

Looming over all potential paths for tax extenders is the possibility that a slimmed-down version of the Build Back Better Act makes it through Congress. The original legislation sank in late 2021 when Manchin said he would not support it, meaning it couldn’t get the 50 votes (plus that of Vice President Kamala Harris) needed to pass in the Senate as a budget reconciliation bill.

A 2022 version of such legislation–which requires the support of Manchin (and Sen. Kyrsten Sinema, D-Arizona)–would likely be slimmed down, yet could include many of the renewable and clean energy provisions. That scenario would lessen but not eliminate the urgency to pass a late-year tax-extenders bill.

Democrats would be motivated to include subsidies for the Affordable Care Act’s insurance marketplaces. Barring an extension, many Americans would get notification of a looming spike in their health insurance premiums just weeks before Election Day 2022, and the increase would be significant: A report from advocacy organization FamiliesUSA said the average American would see a boost of $708 annually (and West Virginians would see the biggest increase: more than $1,500 annually).

If No Reconciliation Bill

It’s very possible that no reconciliation bill passes, which would ramp up pressure for a tax extenders bill before the end of the year. For renewable energy practitioners, the headline provision would be the PTC, whose expiration for facilities that had not commenced construction at the end of 2021 has stalled the development of additional renewable energy facilities and correspondingly the equity investment market. The ITC is set to drop from 26% to 22% in 2023, so there would be pressure to extend the ITC at the higher rate, too.

Without a reconciliation bill to extend many clean energy provisions, pressure on both Democratic and Republican leaders would increase, although there’s a significant landmark between now and the end of the year: the November midterm elections.

While the saying, “elections have consequences” may be a cliché, there could be immediate consequences to the 2022 midterm election for tax provision extension legislation.

While the major expiring-in-2025 provisions will likely be on hold until after the 2024 elections, this fall’s results will affect not only the next two years in Washington, but the also the fate of a late-year tax bill to extend expired or expiring provisions.

Republicans are hoping to take back both houses of Congress, while Democrats are looking to retain the Senate and perhaps even keep the House. What happens–and by what margin–will have a significant impact on the chances for extender legislation.

Congress generally returns for a postelection, lame-duck session with one of two approaches: Clear the decks for the next session or punt. The winner of the election and the magnitude of that win plays a huge role, although the effect isn’t easy to predict. If Democrats exceed expectations, that may lead to Congress wanting to clear the deck. Or if Republicans win one or both chambers, they may wait until they are in control to write the tax bills to their liking. Retiring members may want to get some legacy-defining victories.

No matter the outcome, election results will affect the possibility of year-end extender legislation. The question is how.

In any scenario, there will be tax legislation because of the magnitude of the tax provisions set to expire. One realistic possibility is a back-to-the-future moment.

Barring either party controlling the White House and both houses of Congress, any 2025 agreement would require bipartisan support that could create a scenario like that from 2012, when President Barack Obama, the Democratic-controlled Senate and Republican-controlled House had to negotiate a deal. They faced expiring 2001 and 2003 tax cuts and across-the-board spending cuts that created a “fiscal cliff” that threatened a financial crisis. The two sides negotiated an agreement that retained the previously enacted lower tax brackets for all but the top two, while adjusting such provisions as capital gains taxes and itemized deductions.

While a repeat of the 2012 negotiations (which resulted in the American Taxpayer Relief Act of 2012) is possible, a sweep by the Republicans or Democrats would change things again and open the door for other expiring provisions to be made permanent or to be allowed to expire.

Republicans will be motivated in 2025 to extend expiring provisions from the law commonly known as the Tax Cuts and Jobs Act of 2017, including bonus depreciation, which will begin a gradual decrease in 2023. Republicans also will want to delay the amortization of research and development expenses. In 2025, neither side will want to be seen as responsible for allowing many of the middle-class provisions to expire, but the control of the presidency and Congress will play a massive role in what is extended and to what extent.

For community development stakeholders, the question is when and what. As more tax provisions expire (whether community-development-related or not), pressure builds to reinstate and extend them. A reconciliation bill that extends clean energy and other provisions would reduce the pressure, but would not eliminate it.

A bipartisan agreement providing extension or permanence for some provisions is possible. Whether that happens this year, in 2025 or never is the question.