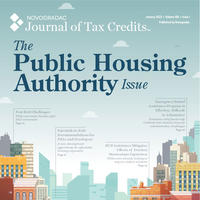 In April 2021, the U.S. Department of Housing and Urban Development (HUD) moved forward with the conceptual guidelines on how to replace demolished or disposed of public housing inventory by publishing the Faircloth-to-RAD conversions guidelines. The Rental Assistance Demonstration (RAD) program has become the cornerstone of public housing preservation and through these guidelines HUD was able to essentially couple its vision of returning these units back to inventory by bridging them to the popular RAD option.

Background of the Faircloth Amendment

President Bill Clinton signed the Quality Housing and Work Responsibility Act of 1998 (QHWRA) into law Oct. 21, 1998. This new law significantly overhauled the Housing Act of 1937–including adopting a number of reforms to the administration of the public housing program. The law was grounded on the welfare reform movement of that time, which included a backlash against social programs. The common belief was that public housing programs were hindering economic and personal independence.

Against this backdrop, Sen. Lauch Faircloth, R-North Carolina, inserted an obscure amendment to Section 9(g)(3) of the United States Housing Act of 1937, which would limit the construction of new public housing units under QHWRA. The Faircloth Amendment states that the U.S. Department of Housing and Urban Development (HUD) cannot fund the construction or operation of new public housing units with capital or operating funds if the construction of those units would result in a net increase in the number of units the PHA owned, assisted or operated as of Oct. 1, 1999.

There has been an ongoing debate as to the practical necessity of the amendment since public housing authorities (PHAs) were already experiencing public housing unit decreases due to blight or lack of federal funding since the early 1980s. According to the National Low Income Housing Coalition, there was a decrease of 206,360 units between 1996 and 2015. Mixed-financed, mixed-income development options became the standard for new affordable housing construction during this period, oftentimes maximizing usage of the low-income housing tax credit (LIHTC) incentive and further decreasing the amount of public housing units.

Cue in: HUD’s Faircloth-to-RAD guidance that was released in April 2021.

“There are some 227,000 Faircloth units nationwide, i.e., units that have been demolished/disposed of from the public housing inventory and not replaced with hard public housing units since around 1999,” said Greg Byrne, a consultant who recently retired as the director of HUD’s affordable housing transaction division. “HUD’s vision (at this point in time) is to see that more of these units can be returned to inventory.”

“We had all received hints and we even had some discussions early this year in anticipation of this vehicle being made available and we were very curious as to how deployable it would be and we are learning more and more about some of those fine details,” said Andrew Blakely, president of TRG Community Development.

According to the HUD guidance, in a Faircloth-to-RAD transaction, PHAs would develop public housing units using HUD’s public housing mixed-finance program with preapproval to convert the property to a long-term Section 8 contract following construction. With early stage RAD conversion approvals, lenders and investors will have the revenue certainty through familiar Section 8 contracts to underwrite the construction of these developments.

Jenn Krieher, a repositioning consultant at Baker Tilly US, further clarified the underwriting as follows: A PHA can request a Notice of Anticipated RAD Rents (NARR) through the RAD Resource Desk to receive rents for a potential Faircloth-to-RAD project. The NARR serves as the subsidy commitment for lenders and to any alternative source of financing.

“I think HUD did a great job in mapping out how to bring these Faircloth units onto the RAD (Section 8 platform) in the most efficient manner possible,” said Byrne. “It was not possible legislatively to allow Faircloth units to go straight to RAD. They had to first come in under the public housing program, i.e., the mixed-finance program. What HUD did was create, essentially, a shadow RAD underwriting process that allows a PHA to develop the Faircloth units as public housing and then, once the units are recognized as public housing, they get converted to RAD.”

Recommendations for PHAs and Developers

And as for the development community, “I would recommend that a developer who is interested in developing new units utilizing Faircloth to RAD should most definitely initiate contact with a PHA especially if they have worked with that PHA before,” said Larsen. He went on to list the housing authorities with the most available capacity, including the Chicago Housing Authority at 19,497 available units, the New York City Housing Authority at 10,864 and the Philadelphia Housing Authority at 7,024.

“There are a variety of ways that housing authorities, developers and players in the affordable housing industry can use this as an opportunity,” said Krieher, who is also a former RAD transaction manager at HUD. “The most evident is to bring new construction units online.”

As Blakley explained, the development community is now scrutinizing the fine details of this option and practical issues have risen. One of the most widely discussed impediments is the potential for lower-than-expected initial rent amounts, since their calculation is based on current per unit subsidies received under the public housing program.

Public housing funding tends to be about 80-85% of Section 8 FMR in most markets, said Byrne.

One of the ways that RAD conversions work around this issue is through rent bundling, which is the adjusting of contract rents across multiple projects to reach an acceptable amount. According to Krieher, this is also another impediment.

“While that is a traditional tool to augment or supplement RAD rents (rent bundling) it is not available on Faircloth to RAD,” said Krieher.

One workaround to the issue of lower-than-expected rents is to pursue the higher LIHTC option.

“These rent levels are still likely to work in many 9% transactions (where there’s less need for debt and, therefore, the break-even rents will be lower),” said Byrne. “Or, in transactions where the developer is required to meet certain very-low income units in exchange for certain development rights.”

The financial gaps created by lower rents can also be filled through outside sources, according to Krieher.

“Utilizing Faircloth-to-RAD as part of a rental subsidy stack … certainly low rents are something to take into consideration, but paired with a capital stack that might include tax credits and other state loans and grants and even local and county grants, it can add up to a deal structure that can be really positive,” she said.

Next Steps for PHAs

Notwithstanding these potential structuring issues, HUD is extending a green light to PHAs and the development community to begin assessing and, if ready, submit applications.

For PHAs interested in putting together a rough initial rent estimate for your cash flow analysis, Krieher concludes with the following recommendations, which were also extended during a March 11, 2021, RAD Collaborative/HUD Recap Office Discussion: