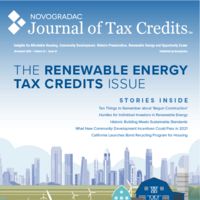 The Internal Revenue Service (IRS) submitted final regulations Sept. 15 for publication in the Federal Register concerning the five-year period over which the federal historic tax credit (HTC) may be claimed, along with other special rules for investment credit property. Proposed regulations were published in May and adopted as final without modification.

The regulations include a general rule for calculating the HTC, definitions for the terms “ratable share” and “rehabilitation credit determined,” and rules to coordinate changes to Internal Revenue Code (IRC) Section 47 with special rules in IRC Section 50 relating to dispositions, basis adjustment and income inclusion. The rules became effective Sept. 18, 2020. The following are common questions about the impetus behind the final regulations as they relate to various parties to HTC deals.

Q: The HTC has been around, in one form or another, for more than 40 years. Why was it necessary for the IRS to publish proposed and final regulations in 2020?

A: The HTC has experienced its fair share of changes over the years since it was instituted in 1979. However, nearly all of its changes have been memorialized through formal amendments to IRC Section 47, especially in 1990 and 2008. When the Tax Cuts and Jobs Act of 2017 was passed, additional amendments were made to the HTC in IRC Section 47, most notably to eliminate the 10 percent HTC and to modify the 20 percent HTC to be taken over five years. While the language in the amendments was succinct, the IRS and practitioners alike felt further guidance was warranted. As a result, the IRS published the brief five subsections comprising the sole regulation in IRC Section 47 in 2020 to clarify and define key terms and new language that was introduced with the 2017 amendments.

Q: Were there any notable changes between the proposed and final HTC regulations?

A: During an era where we have come to expect frequent change and adjustments, the IRS chose to devote its scarce human capital resources elsewhere when they declined to make any changes to the proposed Treasury Regulation 1.47-7 (the “proposed regulations”). The proposed regulations, which were introduced in May, were “adopted without modification” and became effective on September 18. The IRS received only three responses during the open comment period, two of which simply gave the IRS the “thumbs up” that they concurred with the proposed regulations as originally drafted.

Q: What are the key takeaways I should know regarding the final HTC regulations?

A: HTC industry professionals should be aware of the following five key takeaways.

The proposed regulations were adopted as final without modification, resulting in no substantive changes between the two publications.

The five-year period for claiming HTCs begins in the year the qualified rehabilitated building (QRB) is placed into service. HTC credits are allocated an equal 20 percent to each of the five years, regardless of what month or day the QRB is placed in service.

For single-tier HTC transaction structures, the full amount of any IRC Section 50(c) basis adjustment is accounted for in the same year that the QRB is placed in service, despite the credit being claimed over five years.

For lessor-lessee HTC transaction structures, the IRC Section 50(d) income inclusion for the lessee is calculated on the full amount of the HTC, as determined in the year the QRB is placed in service. This income inclusion is amortized ratably into income over the life of the shortest recovery life of the qualified rehabilitation expenditures giving rise to the HTC.

In reference to IRC Section 50(a) credit recapture guidelines, only one tax credit period exists for each HTC deal and that period begins on the date the QRB is placed in service. Taxpayers who dispose of a building partway through the 60-month compliance period may still continue to claim some of the credits with respect to that building.

Q: What impact, if any, will the IRC Section 47 regulations have on HTC deals and investor yields?

A: Before the issuance of the proposed and final regulations, some investors and practitioners speculated that the calculation for the first and final year of tax credits would include a proration methodology whereby a full-year’s credits would be allocated based on the month the QRB is placed into service. The regulations make clear that there is no proration of HTCs for the first year a QRB is placed in service. As such, HTC investors and developers alike should be keenly aware and sensitive to the impact that delayed projects can have on investor yield if QRBs are not placed in service before the year-end cutoff.

Q: When do the final regulations become effective? Should I revisit HTC deals that have finalized in the last few years?

HTC deals that were finalized after Dec. 31, 2017, and that do not adhere to the guidelines found in the regulations may face greater scrutiny in the event of an IRS examination. The final regulations did not provide guidance on how to treat projects adhering to different tax treatments for new projects finalized after Dec. 31, 2017, but before regulations were issued. HTC investors and developers in this category will likely have to decide between continuing with a tax treatment inconsistent with the final regulations or changing their approach moving forward (this alternative may warrant amending previous tax returns or submitting an administrative adjustment request). Discussions with all affected parties are likely needed to assess and determine the best approach based on each deal’s unique circumstances.

Q: Where can I find more information and examples for the HTC regulations?

A: For a more detailed analysis, discussion and examples of the above items, the August 2020 edition of the Journal of Tax Credits includes a fantastic article by Novogradac partners Thomas Boccia, CPA, and Roy Chou, CPA, that takes a deeper dive into the HTC proposed regulations.

ESG Investing: Where it is Now; Where it’s Headed; What to Do
Historic Tax Credit Direct and Lease Pass-Through Transaction Structures
Transactional Structural Challenges Faced While Pairing HTCs and OZ Incentive
END_OF_DOCUMENT_TOKEN_TO_BE_REPLACED