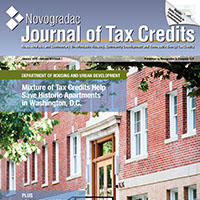 The economy in Fort Lauderdale, Fla., is growing rapidly, but the supply of affordable housing isn’t.

“We have all the desirability of a big city, but the wages don’t stack up to it,” said Ann Diebert, CEO of Broward County Housing Authority since 2011. “The largest group of employees is in lower-wage service sector–54 percent of the workforce. And Broward County is landlocked–it’s built out, largely.”

The result of Fort Lauderdale’s economy? Plenty of jobs, but often without enough income to afford rent. A report published this year by Florida International University (FIU), “Broward County Affordable Housing Needs Assessment,” found that the number of renter households that are extremely cost-burdened, or paying more than 50 percent of their income on housing costs, increased by 15 percent since 2009, to 52 percent.

“I think what makes it different (than other American cities) is that it’s part of the southeast corridor–from Miami to Palm Beach, over three counties,” said Anne Ray, the manager of the Florida Housing Data Clearinghouse at the University of Florida’s Shimerg Center for Housing Studies. “Housing costs are high and there are a lot of low-wage jobs. There are also second houses (for people who live elsewhere). There are more low-wage jobs and high housing costs than in other parts of our state.”

Fort Lauderdale is the county seat of Broward County, 23 miles north of Miami on the east coast of Florida. The balmy year-round weather helps attract a variety of residents and tourists. With 165,521 residents according to the 2010 census, it was Florida’s eighth-largest city and it grew 4.2 percent to an estimated 172,000 residents since.

The city suffered more than most during the Great Recession, then rebounded better than most. Since 2010, Fort Lauderdale and the rest of its Metropolitan Statistical Area (MSA), which includes Miami and West Palm Beach, experienced significant increases in employment, increasing at a rate nearly double that of the nation as a whole.

Fort Lauderdale’s economy is strongly influenced by tourism, with the Greater Fort Lauderdale Convention and Visitors Bureau estimating that Broward County had 13.4 million visitors in 2013, spending more than $10.6 billion. There are about 4,000 restaurants and 12 malls in greater Fort Lauderdale, leading to plenty of service-sector jobs. Another of the employment hubs is the aviation industry. It includes the Fort Lauderdale-Hollywood International Airport, which now provides more than 135,000 direct and indirect jobs to the region. Further south, the Port of Miami employs about 180,000 people directly or indirectly, with an $18 billion contribution annually to the local economy.

While the entire nation went through a housing bubble and bust in the first decade of the 21st century, the Fort Lauderdale area was hit particularly hard. “Florida was always an affordable place to live, but that ended starting in 2004,” said Dr. Ned Murray, the associate director of the Metropolitan Center at FIU and author of FIU’s report on affordable housing in Broward County cited earlier. “Tracking it back in time, you can show that Fort Lauderdale and Broward County went from about 3.5-to-1 on affordability (a comparison of median home price to median income) to about 7-to-1.” That was also true of rental prices and when those out-of-reach housing prices crashed, it further hurt the economy.

“That area was one of the real victims of the housing bubble. As it blew up, there was the foreclosure crisis,” Murray said. “So much of the south Florida economy is based on construction finance, real estate and other areas hit by the recession.” The result was that rental prices stayed high–there were suddenly plenty of people who lost their homes and were now renters–and income couldn’t keep pace. According to the U.S. Census Bureau, about 45 percent of the households in Fort Lauderdale earn less than $35,000 per year and 19 percent earn less than $15,000 per year.

“The last study we did showed that the highest segment of the economy in Broward County is paying more than 50 percent for rent,” Murray said. “That segment just spiked. Even post-bubble, rents went up, never down. There’s so much demand.”

Diebert says that like many places, Fort Lauderdale faces an image problem when discussing affordable housing. “One of the (hurdles) is an understanding of what affordable housing is,” she said. “Some people think affordable housing means not only lower income, but that it will take property values down and there are safety issues. It’s not always welcome in this area.”

Murray agreed. He also said residents don’t recognize the problem, due to the apparent booming economy. “As long as people see economic activity and job growth, they don’t realize there’s a big gap in the market that’s not being addressed,” he said.

“It looks like things go well because of the boom, but what about our workers? A lot of industries (understand) it, but it’s not translating to government and our elected officials.”

But there are other significant hurdles. “They’re building like crazy, but all the market is external, there’s nothing local,” said Murray. “It’s (money from) South America, Europe and Asia.” The result is that even property that is considered for affordable housing often is purchased for cash and used for upscale development.

Jonathan Brown, the Fort Lauderdale housing and community development manager, said there is a significant local need for affordable housing. In addition to the demands that exist in most places, Fort Lauderdale also has a lot of older housing in predominantly low-income areas, so even available homes are in need of rehabilitation.

Florida’s affordable housing trust fund–called Sadowski Funds, after the William E. Sadowski Affordable Housing Act, passed in 1992–sets aside a fee on all real estate transactions, with 70 percent going to counties and cities for affordable housing development, construction and rent, mostly as part of the State Housing Initiatives Partnership (SHIP) program. Most of the rest goes to the State Apartment Incentive Loan (SAIL) program, which provides low-interest loans to affordable housing developers to bridge the gap between the primary financing and cost of development. That combination worked for the first 15 years, but at the outset of the Great Recession in 2007, the Florida Legislature transferred those funds to non-housing uses, a move that wasn’t reversed until 2014.

Despite the lack of state money, affordable housing efforts continued. Broward County Housing Authority’s Diebert said her group purchased a 64-unit complex in the mid-2000s, developed it and others and then used that building as a guarantee to get tax credits. It now has 731 units. She said that low-income housing tax credits (LIHTCs) are important, but there just aren’t enough. “We’re all trying to use 9 percent tax credits in Broward County,” she said. “It’s the only game to develop affordable housing. But we find a scarcity of [available] money.”

Last year, the state did a special “carve-out” and awarded two Broward County developments the tax credits. That was good news to Diebert, whose organization landed one of the two LIHTC awards, but she has perspective. “In Florida, even if you have the perfect application, it’s based on a lottery,” she said. “We got one of two in the last round. We had submitted four times prior. So it’s not easy.”

The city also offers a variety of U.S. Department of Housing and Urban Development (HUD) programs, including HOME Funds to Community Housing Development Organizations (CHDOs) when available to acquire, rehabilitate and rent or sell affordable housing. However, Brown said none of those funds have been used on developments larger than four housing units.

He also said the city participates in other HUD programs: HOME Partnerships Investment program, Community Development Block Grant program, Neighborhood Stabilization program and Housing Opportunities for Persons with AIDS (HOPWA) program. But at the end of the affordable-housing day, it’s the same story: high demand, little supply and extreme competition for development opportunities. “It’s an expensive market,” said Ray. “If you look at the gap in low-income rental housing that’s affordable and available, you can see Florida has had a real gap in supply of rentals.”

Murray said the region, like others, is largely on its own. “There’s nothing coming out of Washington or state capitals,” said Murray. “Florida had a viable program–SHIP could do a lot. But there’s not much left. We also had plenty of resources from HUD, but that’s all gone. We have to figure out how to do it at the local level.”

Renter Households will Need Assistance Long After the Pandemic is Brought under Control
Tuesday, July 28, 2020
END_OF_DOCUMENT_TOKEN_TO_BE_REPLACED