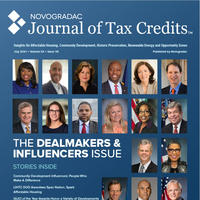 Two former hospitals, an old high school and a foundry were all redeveloped into properties that received 2021 Novogradac Journal of Tax Credits Historic Rehabilitation Awards.

The awards go to participants who strive for excellence in historic preservation.

The 2021 winners are The Tyler in East Haven, Connecticut; Milwaukee Soldiers Home in Milwaukee; City Foundry STL in St. Louis and Cook County Hospital in Chicago. The winners will be honored at the Novogradac 2021 Historic Tax Credit Conference Oct. 7-8 in Chicago.

Following are descriptions of the four winning properties:

The former East Haven High School building in East Haven, Connecticut, is now The Tyler, a mixed-income community for seniors. It is also one of the first adaptive reuse properties in the nation designed to adhere to the Passive House Institute’s EnerPHit program standards with applicable historic exclusions.

The Tyler, developed by WinnDevelopment, cost $31.7 million. It received $8.9 million in federal and state historic tax credit (HTC) equity from Bank of America. The 70-apartment property includes a residential lounge, fitness center, community kitchen, entertainment space, craft room, reading nook and an outdoor courtyard. It also includes an on-site management office. Fourteen of the 70 apartments are set aside for formerly homeless individuals/households or those at risk of homelessness.

The development team maintained the historic fabric of the original building by retaining millwork, original lockers, display cases with local artifacts and a stately brick façade. The conversion of the existing historic property into housing will avoid 18,000 metric tons of greenhouse gas emissions, the equivalent of 1,900 homes’ annual energy use, every year.

“WinnDevelopment leads by example,” said Claudia Robinson of Bank of America, a judge for the awards. “The Tyler reflects the perfect combination of historic conservation, ideal senior housing and sustainable design.”

One of Milwaukee’s most important historic assets has been rehabilitated to provide 105 supportive housing units for veterans and their families who are homeless or at risk of being homeless.

Milwaukee Soldiers Home is on the grounds of the Clement J. Zablocki VA Medical Center. As part of an enhanced-use lease agreement with the U.S. Department of Veterans Affairs, the Alexander Company restored and rehabilitated six vacant buildings. When the effort began in 2010, the Victorian Gothic Old Main building had been vacant for 20 years, had a hole in the roof and was near collapse. By the time the renovated property opened in March, it was ready to provide housing and services to veterans–a full circle for a property that opened in 1867 to help Civil War veterans.

“Commitment, dedication, patience and focus all came together in the perfect way to preserve this historic structure so it can be a place of stability and safety for our veterans who have done so much for the country,” said Donna Rodney of Miles and Stockbridge, one of the award judges.

The $217 million redevelopment of City Foundry STL in St. Louis is one of the largest historic redevelopments in city history and will feature a 700-person event space, a theater, grocery store, office space, retail space, restaurants and bars and a new multistory parking garage.

The development is on the site of the city foundry built by Century Electric in 1929–which functioned as a foundry for more than 80 years before closing–and is in a previous food desert.

FoPa Partners LLC, an affiliate of St. Louis-based development firm Lawrence Group, acquired the site in 2015 and created a redevelopment that will result in 800 new permanent jobs, clean up 100 years of environmental contamination and be built by majority-minority business enterprises. A second phase will feature 282 apartments.

“City Foundry is a perfect example of how the old can be fused with the new to create something uniquely different and impactful for a community,” said Rodney. “If you want to make a positive economic impact on a community, you must bring the people and what better way to do that than by providing a variety of offerings in a single location? By being a destination for work, dining and entertainment, City Foundry STL has turned the area into a location for fun-seekers and businesses alike.”

The adaptive reuse of the old Cook County Hospital in Chicago by Murphy Development Group and Walsh Construction into a 210-room Hyatt Place/Hyatt House Hotel, Cook County Medical office facility, a museum dedicated to the legacy of the building and a 13-vendor food hall involved $23.6 million in federal and state HTC equity from U.S. Bancorp Community Development Corp.

Built in 1916, the re-development team preserved the architecture of the Old Cook County Hospital as an example of Beaux Arts-style architecture.

From its founding until immediately after World War II, the Cook County Hospital was considered one of the world’s great teaching hospitals and, for eight decades, it served the city’s indigent population. Located in the heart of the Illinois Medical District, it now better supports the surrounding medical community.

“The long-awaited rehabilitation of the Cook County Hospital Administration Building is a monumental success story for historic preservation advocacy and it shows what can be achieved when preservationists, developers, local government and the community all decide that a building is too important to lose,” said Bill MacRostie of MacRostie Historic Advisors LLC, a judge for the contest. “With the critical funding provided by federal and state historic tax credits, this massive and long-vacant hospital now stands restored as an impressive gateway to the Illinois Medical District and will continue its legacy of compassionate care for all, serving the needs of medical district worker, patients and their families for decades to come.”

ESG Investing: Where it is Now; Where it’s Headed; What to Do
Historic Tax Credit Direct and Lease Pass-Through Transaction Structures
Transactional Structural Challenges Faced While Pairing HTCs and OZ Incentive
END_OF_DOCUMENT_TOKEN_TO_BE_REPLACED