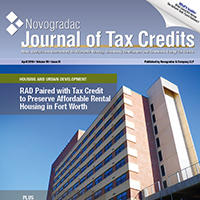 Anyone in the affordable housing business will tell you the importance of preserving existing affordable housing stock. Fort Worth Housing Solutions certainly felt that way after Hunter Plaza, a former public housing development in downtown Fort Worth, Texas, was evacuated and closed in 2010 after a bedbug infestation.

Six years later, Hunter Plaza was converted into a mixed-use, mixed-income development that opened in February. “It’s our mission to provide housing to low-income families,” said Naomi Byrne, executive director of Fort Worth Housing Solutions, the local housing authority. “This was an asset in downtown that had been unused, and we wanted to redevelop this property to help meet our mission and to aid in building up the downtown core.”

Hunter Plaza features 164 apartments, 114 of which are reserved for those earning no more than 60 percent of the area median income (AMI). The remaining 50 apartments are market-rate. Rental homes range from 550 square feet to 850 square feet. In addition to the housing units, Byrne said the property features a clubroom, fitness center, library, business center and theater room for residents.

The development also features 10,000 square feet of retail space on the ground floor of the 11-story building. Byrne said Fort Worth Housing Solutions is looking at various professional companies, such as law firms and employment services companies, as potential tenants. The housing authority previously occupied this retail space. The final component of this development is a newly constructed parking garage built adjacent to the property. It has 170 parking spaces that are used by tenants and the general public alike.

The development had a very large scope of work. The housing authority worked in coordination with Carleton Residential to “take the building down to the studs on each floor,” said Byrne, in order to provide 21st-century amenities to its tenants.

The building was constructed as the Fortune Arms hotel in 1954. Then, in 1971, it was purchased by Fort Worth Housing Solutions and converted to public housing. In this most recent update to the building, the housing authority used both federal and state historic tax credits (HTCs). In order to receive the credits, a number of the building’s historic features were preserved.

The main component of the building being preserved is the exterior brick façade, which has a mix of light and dark brick. On the interior, the entire bottom floor was preserved, including the exposed concrete walls. Byrne said it was very important to the National Park Service (NPS) that the hallways remain intact as constructed. Byrne also said that the original doors to the hotel rooms had to be preserved. Since many of the rooms were reconfigured to accommodate larger housing units, a number of these doors are “nonfunctional,” said Byrne.

Windows are another key component that the NPS typically wants to see preserved. However, in this instance, Will Henderson, director of affordable housing at Carleton Residential, said that the original windows were destroyed in 2001 when a tornado struck the city. As a result, the NPS approved keeping the windows that were installed in 2001 “When you go into a 70-year-old building and tear it down, there are going to be some surprises,“ said Henderson. “This is an old building built in the 1950s. The architecture is very representative of that era.” Carleton Residential is primarily an affordable housing developer with a particular focus in working with housing authorities to redevelop existing affordable housing stock, making this development a perfect fit, said Henderson. While this development fit the company’s niche, Henderson called this “probably one of the most complex deals we have done” because of all the financial sources that made up the capital stack.

In order to preserve the units as affordable housing, Fort Worth Housing Solutions converted the public housing units under the U.S. Department of Housing and Urban Development’s (HUD’s) Rental Assistance Demonstration (RAD) program. In addition, all of the affordable units were financed using low-income housing tax credits (LIHTCs) while 25 of the units also receive RAD project-based rental assistance vouchers and 30 units have project-based Section 8 vouchers from the housing authority, said Henderson. “HUD approved the RAD conversion to help us close the funding gap,” said Byrne.

The development of Hunter Plaza used an array of funding sources. PNC Bank was the investor in the 4 percent LIHTCs and the federal HTCs. It provided $4.9 million in LIHTC equity, $3.8 million in federal HTC equity and a $4 million bridge loan during construction. “We are seeing more mixed-use developments in the urban areas,” said Gayle Manganello Ellis, senior vice president of originations for tax credit capital at PNC Bank. Manganello Ellis said this was an attractive investment to PNC given the bank’s presence in Texas in addition to the significance in partnering on a development which would bring affordable housing, market-rate housing and office space into a previously vacant building in downtown Fort Worth. Community Bank of Texas purchased the tax-exempt bonds for $15 million, which will be paid down to $11 million and converted to a primary mortgage.

Stonehenge Capital provided the state HTC equity. “The mixed-use components (retail, affordable and market rate housing) support the growth of downtown Fort Worth and will provide its residents and tenants a great location in an area that has seen a resurgence of activity. We hope that the project will enable further development in the area,” said Whitney LaNasa, director of tax credit services, Stonehenge Capital Company. “Furthermore, we also welcomed the opportunity to participate in a challenging LIHTC and HTC twinned project that enabled us to bring our expertise on state historic tax credit transactions to ultimately complete the capital stack.”

“There are so many sources in that capital stack. Meshing all of the programs was a big challenge,” said Henderson. “This was one of the first developments in Texas to use the state HTC. The Texas Historical Commission was writing regulations as we were applying for the credits,” said Henderson.

“While this was a complex transaction, it was well worth the effort. It preserved a historic building in the downtown corridor of Fort Worth while bringing back online a number of affordable housing units,” said Phong Tran, partner in Novogradac & Company LLP’s Austin, Texas, office.