Four Common LIHTC Compliance Pitfalls and How to Avoid Them 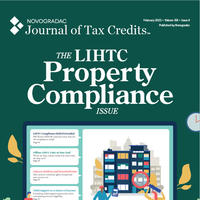 We at Novogradac are regularly engaged by developers and property managers of low-income housing tax credit- (LIHTC-)financed properties, and their investors, to review tenant files. From this vantage point, we witness the high degree of property compliance across properties.

That said, we have identified some property compliance pitfalls or categories of pitfalls that we see across a subset of LIHTC properties. These compliance pitfalls–or, rather, examples of LIHTC noncompliance–can (but don’t necessarily) lead to financial loss through reductions of current and future credits, as well as recapture of previously claimed credits.

This column doesn’t have sufficient space to review all LIHTC compliance pitfalls, but will discuss four that are most common. They are:

With an eye on avoiding noncompliance, we will also review corresponding action steps to avoid them.

The most common cause of noncompliance is a failure to properly determine household income. The calculation of household income has three central components: who makes up the household, their sources of income and the projected income on assets they hold.

The most common error in determining household makeup is a failure to properly account for future residents during initial screening. Tenants are required to declare whether any future residents are expected, allowing the property manager to include them in initial screening. Sometimes, tenants will fail to answer this question on tenant questionnaires and property managers fail to follow up. The result is the omission of the income of the future resident, which can mean the household is over-income.

A related error is failing to properly screen additional residents who join the household after initial screening. New residents must be fully screened to determine continuing household eligibility.

Failure to do either of those means the income cannot be excluded. Including the lesser amount without meeting both standards can cause noncompliance.

A common error in determining asset income involves property managers failing to recognize income from certain assets when that income is reinvested. Reinvested interest or dividend income is still income and must be recognized as such to avoid potential noncompliance.

Action step: Make sure your tenant application reflects the requirements for your state, then bring in outside professional help to review your application and household-income-calculation systems. Have a tenant file inspection before the end of the first year of your credit period.

Property managers must verify reported household income and the most common error is failing to follow the state’s verification standards.

Action step: Create a checklist of verification steps for your state(s) and have that reviewed by an expert. Also, provide a system to ensure that the correct steps are followed. Bring in an outsider to review verifications and catch oversights.

Tenants transferring between units can create surprising compliance issues, issues of which many property managers are unaware.

To understand the issues requires a look at the swap rule for LIHTC housing, which provides that when a tenant moves from their unit to another unit, the units swap status. This rule generally applies on a building-by-building basis unless the property owner has chosen to apply the rule on a project-wide basis.

For mixed-income LIHTC projects, the swap rule means that when an income-qualified LIHTC tenant moves from a LIHTC unit to a market-rate unit in the same building, the units swap status–with the former market-rate unit becoming a LIHTC unit and vice versa. The problem comes when the unit into which the low-income tenant moved is smaller than the previous unit, which can reduce the qualified basis on which the LIHTC is claimed for the building. While not technically a noncompliance matter, credit loss and recapture could result.

A related issue is when a LIHTC tenant in one building moves into a market-rate unit in another building in the same mixed-income project. In that scenario, the low-income occupancy percentage for each building changes, which could reduce the LIHTCs.

A third error comes when a tenant moves to another building within the same property when property compliance is not determined on a project-wide basis. Rather, the second building was declared a separate project on IRS Form 8609. In this scenario, property managers might assume the tenant is automatically qualified as a low-income household for the new building when they’re not: when moving from project to project, tenants must be certified each time and failure to do so results in noncompliance.

A fourth error in tenant transfer arises when a tenant’s income has reached 140% or more of the income limits for the property and moves to a new unit in a different building in the same mixed-income project. Such a tenant may remain in their current unit, but is ineligible for another LIHTC unit–and allowing that transfer makes the new unit noncompliant.

Action step: Recognize the consequences of tenant transfers and bring in outside help to best manage them. Consider your options at the outset: when the Line 8b election must be made on IRS Form 8609 to determine the makeup of a project, consult with an expert on your options and the repercussions. Once the election is made, review it regularly when considering transfers and new tenants.

Failure to conduct annual reviews or correctly implement updated utility allowances will create noncompliance–and there are two common errors that create that scenario.

The first is when properties using the public housing authority (PHA) method for utility allowances fail to implement a new allowance within the allotted time. Properties generally have 90 days to implement an updated PHA allowance (which often requires a rent adjustment), so a failure to check in regularly with the PHA can cause a failure to meet the deadline.

Action step: If you use the PHA method, ensure that you are checking in regularly with the PHA and documenting those efforts (with a phone call log or with dated pdfs to prove you reviewed the website). If you use one of the other methods, have a timeline and follow it. In both cases, bring in outside professional assistance to choose the right method and ensure you are implementing it correctly.

Before closing, here are some additional, overarching compliance action steps:

As said earlier, the percentage of LIHTC properties that are in full compliance is extremely high–and a robust property compliance system is crucial to avoiding noncompliance. Being aware of pitfalls, conducting ongoing training, creating systems and correcting errors as quickly and thoroughly as possible can help avoid the headaches and financial penalties that can come with noncompliance.

ESG Investing: Where it is Now; Where it’s Headed; What to Do
Everything You Need to Know about State LIHTCs in 2022
Knowing What Makes a Property Unique, Distinct is Vital in the Preservation of Affordable Housing
END_OF_DOCUMENT_TOKEN_TO_BE_REPLACED