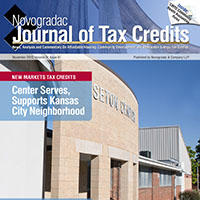 During the past two years, low-income housing tax credit (LIHTC) developers have been increasing their use of a new financing structure that marries a taxable conventional loan with equity from 4 percent LIHTCs. Although at least 50 percent of a 4 percent LIHTC development’s aggregate basis needs to be financed with tax-exempt private activity bonds for the developer to secure the LIHTCs, compelling taxable mortgage rates have made taxable conventional loan financing an attractive alternative to traditional tax-exempt bond financing. This financing structure meets the 50 percent test by issuing short-term cash-backed tax-exempt bonds, initially secured by the cash proceeds of the bonds themselves. Conventional loan proceeds replace these funds as the tax-exempt bond funds are advanced to the property. Once the development is placed in service, the short-term bonds are redeemed and the development is left with the conventional permanent loan.

A unique confluence of events has contributed to the rising popularity of this structure: high grade taxable rates have been lower than comparable tax-exempt multifamily rates; GNMA’s bonds have traded extremely tight to Treasury bonds; the Federal Housing Administration (FHA), the most frequently used taxable permanent loan provider, has streamlined its approval process for certain loans; and Freddie Mac and Fannie Mae have been aggressively looking to finance low-income developments.

What Has Happened to Interest Rates?
Historically, tax-exempt interest rates trade anywhere from 70 percent to 85 percent of comparable maturity taxable rates, generally because taxable interest income is included in adjusted gross income for tax purposes. General concerns about municipal credit quality, however, along with other technical factors, have resulted in a significant outflow of funds from the tax-exempt market in recent months and driven the tax-exempt to taxable yield ratio as high as 120 percent. While some buyers have returned to the market, the ratio remains close to 110 percent. This relationship has made taxable loans more attractive relative to tax-exempt funded loans.

Another factor influencing taxable rates for taxable FHA multifamily loans is the increased demand for the purchase of GNMAs. FHA 221(d)(4) and 223(f) loans result in the delivery of a GNMA mortgage-backed security, which is sold into the market. The price that buyers will pay for these securities is a large part of what determines the mortgage rate. Real estate mortgage investment conduits (REMICs) have constituted a large part of the GNMA market. These buyers take portfolios of GNMAs and issue pass-through certificates for broader investor distribution. REMICs were especially aggressive buyers from late 2012 through early 2013, as they found the increased yield available in GNMAs compared to Treasuries particularly attractive in the very low interest rate environment. While GNMA rates have climbed since the end of 2012, they still produce taxable FHA/GNMA loans that are below loans funded in the long-term FHA enhanced tax-exempt market.

Conventional FHA and Agency Lending Programs
FHA lending programs have always been an attractive alternative for the long-term financing of affordable rental housing properties. Lower debt service coverage requirements and longer amortization periods result in greater proceeds than can be found in other structures. The fact that they are non-recourse is also highly attractive. What has been less attractive is that their use requires that a development adhere to federal Davis-Bacon Act wage requirements, and the relatively long FHA loan processing time. Many developers will accept the additional cost of Davis-Bacon wages, particularly on an acquisition/rehabilitation property, but developers may have a hard time waiting for approvals because of allocation deadlines, seller impatience and fear of missing a favorable interest rate. To address these issues, the U.S. Department of Housing and Urban Development (HUD) in February 2012 started a pilot program that reduced the processing time for most 223(f) loans and increased from $15,000 to $40,000 per unit the amount of rehabilitation that developers can perform on a property to use the 223(f) program rather than the 221(d)(4) program, which has a longer timeframe. HUD expanded the pilot program to the entire country late last year. Affordable housing developers are using both these programs on a taxable basis more frequently with 4 percent LIHTCs.

Initially the hybrid structure was used only in connection with conventional FHA/GNMA loans. However, pricing improvement at Freddie Mac and Fannie Mae has resulted in taxable loans from both agencies being combined with the short-term cash-backed bond financing structure. It only works effectively, however, with the agencies immediate funding programs, not their forward loan programs. Of particular note is that Freddie Mac initiated a program earlier this year to increase the number of Very Low-Income (VLI) units they finance. VLI units target families and individuals whose income is less than 50 percent of area median income. Freddie Mac, therefore, is trying to finance many of the same developments that are, or were, financed with 4 percent LIHTCs. To achieve its goals, particularly in markets with a large number of Community Reinvestment Act-motivated financial institutions, Freddie Mac has provided attractive taxable financing options to affordable housing developers.

The Short-Term Cash Backed Bond Structure
The short-term cash backed bond structure allows developers to secure an allocation of 4 percent LIHTCs and lock in the long-term rate available in the credit markets using either the FHA, Freddie Mac or Fannie Mae conventional loan alternative. This is accomplished by the developer submitting a private activity bond allocation request and the agencies processing the conventional loan request at the same time as the bond allocation request. Once allocation and issuer approvals are received and the loan is approved, the lender will lock the permanent loan interest rate and a bond underwriter will concurrently sell short-term tax-exempt bonds in the market or a financial institution will buy the bonds privately. The short-term bond proceeds are deposited in an escrow held by a trustee and they can only be invested in Treasury bonds or other similarly rated short-term instruments. This escrow is security for the tax-exempt bonds and, if structured properly, will result in an AA+ Standard & Poor’s rating.

As the developer requests funds to construct, buy or renovate the property, proceeds are withdrawn from the bond-funded escrow to pay the costs and a like amount of conventional loan proceeds are deposited into the escrow. In this manner, the development uses bond proceeds, thereby satisfying the 50 percent test, and the short-term bondholders are always 100 percent cash collateralized. After the development is completed and placed in service, the short-term bonds are retired and the taxable loan remains outstanding.

While traditional tax-exempt multifamily bond structures are still most prevalent, this hybrid financing structure has become more popular during the past 18 months. The pace of activity has accelerated from the beginning of the year, even as rates have increased. When rates were lowest, conventional FHA/GNMA 35-year mortgage rates, including the mortgage insurance premium, were 2.75 percent to 3.00 percent. While rates are now nearing 5 percent, they remain substantially below an FHA tax-exempt bond execution, and taxable Freddie and Fannie rates are at or below the most aggressive bank tax-exempt permanent loan rates in many regions. Because of this, the structure remains a viable and attractive alternative for financing 4 percent LIHTC developments.

Richard Gerwitz has more than 30 years of experience in the tax-exempt securities and real estate markets. Mr. Gerwitz has financed new construction and acquisition/rehabilitation projects all across the country using a variety of financing and capital structures, including credit enhanced and non-credit enhanced private placements.