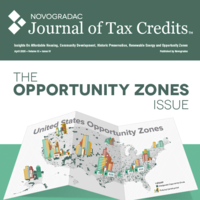 The final opportunity zones (OZ) regulations released at the end of 2019 by Treasury and the IRS were what most fund managers expected based on the first and second tranche of proposed regulations that came out in 2018 and in early 2019, but some QOF managers still have a few questions.

“They clarified a lot of things,” said David Sher, co-CEO of Greenbacker Capital. “First, the final regulations clarified the rules about assets that qualify for the incentive, and second, from a structural perspective, they clarified many rules regarding partnerships and how they work in an opportunity zone context.”

“What I would like to see is perhaps some extensions on the dates and greater benefits to investors,” said Jim Bristol, co-founder and fund manager for Greenwave Opportunity Zone Fund. “The Dec. 31, 2019, deadline [to receive the extra benefit of holding an investment for seven years] caused confusion. In general, I’d like to see the benefits increased. Also, the clarification of the qualified opportunity zone business was helpful. Many operating businesses can benefit from clean energy investment. It can’t all be about building new assets.”

Sher agreed that the deadline at the end of 2019 was confusing, especially since the regulations weren’t available for most of that time, and he shares the notion that OZs are places that wouldn’t otherwise see this kind of investment and economic activity.

“We definitely still have questions about reinvestment and distribution of OZ assets,” said Jack Funk, principal at Lodestar Energy. “I think they could have gone into more detail about that.”

“It’s going to be really important that these OZ projects can turn around and measure their impact and report that impact to the market in a standardized format and on a regular basis,” said Sher. “One good thing about renewables is that at least the environmental impact is easy to measure from an impact-reporting perspective. Renewable projects are socially responsible, create jobs, improve the air quality versus fossil fuel based power generation and it seems like a natural fit because of the strong social and environmental impacts renewables have.”

“Even though the solar is located in an opportunity zone, it’s serving and benefiting other low-income communities as well,” said Karin Barry vice president and manager of renewable energy for NTCIC.

“The public and shareholders are asking big business what they’re doing about their carbon footprint,” said Bristol. “Boardrooms are asking what can be done to reduce emissions and waste. What is encouraging is conversations with multigeneration family businesses concerned about operating cleaner and more efficiently, their carbon footprint and their social responsibility. It’s not solely about making money anymore.”

So You Want To Invest in Renewable Energy?

The bottom line for investing in or committing to OZ renewable and clean energy projects is usually a variation of this: it benefits everybody and helps our planet. From a business and investing perspective, there’s much more to it.

“We found that we are doing what we call ‘anyway’ projects,” said Bristol. “In other words, these are projects we would do anyway, because it makes good economic sense for the clients. The OZ incentive attracts private wealth to underinvested areas that would otherwise not be considered.”

“The purpose of the legislation is to encourage projects in areas that you wouldn’t normally invest in,” said Sher. “From the investor side, opportunity zones make it easier, due to the tax benefits. Renewable energy projects tend to be constructed on margin land, where there are few alternative economic uses. That matches well with the location of many opportunity zones, which tend to be in economically depressed or rural areas. For example, we recently completed a project in an area that was a junkyard for the last 30 years.”

Sher notes that while there’s some justification for building a hotel or housing development in certain OZs, it doesn’t always make sense as an investment.

“Putting the Empire State Building in the middle of Kansas might not make economic sense,” said Sher. “However, building a wind farm in Kansas creates more job opportunities, reduces carbon emissions and can benefit multiple communities.”

“One of the things that we have liked about rural OZs from the beginning is that they are a natural fit for solar,” said Funk. “We’re excited to work in the program and we’ve identified six more OZ projects.”

“I heard about the OZ program and knew instantly that I had to be a part of it,” said John Rowland, president of S2A Modular.

When it comes to options, there are few creative limitations when looking to invest in renewable energy in an OZ.

For example, Lodestar Energy develops solar fields that power nearby communities and has a few solar projects that power nearby affordable housing developments. One project in Massachusetts used OZ investment, the solar investment tax credit and Massachusetts’ SMART program, which encourages developers to subscribe residential customers to the project who then receive an energy cost credit.

“It was a project that we had looked at doing in 2012, but we couldn’t make it work,” said Jeff Macel, co-founder and managing director at Lodestar Energy. “Serendipity would have it that the OZ incentive was announced when we had started working on the project again in 2017.”

Greenbacker Capital Management focuses on building renewable infrastructure projects, such as wind or solar fields, which provide clean energy to local utilities, municipalities or corporations. Investors see a return from the sale of the energy and the utility or municipality is provided the opportunity to build their green portfolio and advertise that fact.

Greenwave Opportunity Fund also has its own unique focus.

“We are an energy investment firm that focuses on clean energy development with applications in commercial and industrial businesses,” said Bristol. “That allows us to focus on sustainability, efficiency and resiliency with a positive, long-term environmental impact. We explore qualified opportunity zone businesses, design clean energy projects leading to a reduction in energy costs, with the goal that those savings will create new jobs.”

Greenwave’s goal is to reduce a company’s reliance on the grid and increase efficiency and sustainability.

“When a business has to fabricate thousands of items each day, the expectation is to have the electrical power to complete that work,” said Bristol. “If there’s a power failure, production is interrupted. With backup power like solar, combined heat and power and battery storage, production can continue if the grid fails.”

S2A Modular has a similar goal, but it focuses on reducing residential reliance on the main grid. As many Northern California residents learned in 2019, a planned power outage or even a blackout means that businesses can’t open, homes are left without heat and residents are left wondering how long they can make it without power.

“We build factory-built homes to the same codes as when you build on-site,” said Rowland. “All of the homes run themselves with solar power and battery storage, and we use different types of appliances like water heaters or refrigerators so that the home is as efficient as possible.”

S2A Modular is doing work to improve solar infrastructure and has been working on large affordable housing developments or hotels that are self-sufficient and run on solar power alone.

“Everything is based on sustainability,” said Rowland. “We’re also working on a large electric vehicle charging station that operates off the grid and we’re building a charging station with a few stores around it in an OZ near the Four Corners [where Colorado, Arizona, Utah and New Mexico meet].”

Rowland said that while there is a plethora of charging stations outside your local grocery store, or in a parking lot downtown, there’s also a need for charging stations to be built 200 miles outside of town in rural areas where people can stop and charge on a long trip–similar to the necessity for a gas station every 100 miles.

“The common holdup is the ‘not in my backyard’ attitude, it requires a community that embraces the positive results,” said Bristol.

There’s a lot of false information and questions that surround renewable energy.

“People think that when there’s no sun, solar power is worthless,” said Rowland. “But if you go to the beach and it’s cloudy, you can still get sunburned. When it’s cloudy, solar is still generating power, just not at its max capacity.”

“A big argument against wind turbines is that they do kill birds,” said Sher. “However, they don’t kill nearly as many birds [and other wildlife] as fossil fuels. On average, 400,000 birds a year are killed by wind turbines, but as many as 4 billion birds are killed by cats. It’s like comparing apples and oranges; it just isn’t the same.”

The benefit of the OZ incentive is that it benefits holders of unrealized capital gains and for businesses or business property that may not have otherwise received investment due to the competitive nature of other state and federal incentive programs. The flexibility of OZ investments means that renewable energy is often a great fit for the investment, and there’s a diversity of energy projects that fund managers can dig into, and for a variety of reasons.