Reed Realty Group of Portland, Ore., found the site of the future Pac 10 Lofts apartments in Lawrence, Mass., through a combination of old-fashioned grunt work and new technology.

“We didn’t find the building first, we found the market,” said Josh Blevins, director of historic redevelopment and government affairs at Reed Realty Group. “We have a model that identifies cities and [metropolitan statistical areas] to look at and once we identified Lawrence as a city, we looked for buildings. The ‘magic’ [behind finding the site] was a guy sitting in Portland–I think it was actually our managing director, Scott Reed–using Google Earth and Street View to check out underused buildings that didn’t have a for-sale sign on them on the other side of the country. It was modern technology and some old-fashioned luck.”

The luck had a payoff. Reed Realty Group is in Phase 1 of a two-step renovation of a section of the former Pacific Mills wool complex in Lawrence into affordable housing. This phase includes 180 apartments, including 40 workforce homes for moderate-income households. Financing includes equity from low-income housing tax credits (LIHTCs) and state and federal historic tax credits (HTCs), with U.S. Bank as the sole investor.

Reed Realty Group purchased the building in May 2016 and construction began earlier this year.

“We’re super-excited,” Blevins said. “It’s a big building that’s a block off the main commercial street in Lawrence (Essex Street), where there are so many small businesses. Each storefront is a different local business and we think 276 units [after two phases of construction] located one block off the main strip will help the whole downtown. The nearness of Essex Street is an added amenity for our tenants.”

The Pac-10 Lofts meet another need in Lawrence.

“Lawrence is a town that had significant population growth without a corresponding increase in housing,” Blevins said. “The demand is greatly outpacing supply. Also, it’s a market where people are looking for affordable housing. There is a great commuter rail service. Boston is less than 30 minutes by car and less than an hour by rail.”

“This is a great property in a great location,” said Warren Sebra, a partner in the Novogradac & Company LLP Portland, Ore., office, who was a consultant on the development. “That they could preserve a historic structure and create so many beautiful homes brings a significant benefit to the city of Lawrence and the people who will live there.”

Construction on the Pacific Mills complex, once one of the largest textile producers in the world, began in the 1850s near the banks of the Merrimack River. The specific building for the Pac-10 Lofts, built in 1910, was formerly the Upper Pacific Worsted Mill #10, which Blevins nicknamed “the Pac 10” during development as a nod to history and to the Portland-based Reed Realty Group’s affinity for college sports’ Pacific 12 Conference (formerly the Pac 10). The name stuck.

As a former mill, the building has interesting architectural aspects.

“It’s obviously in an old mill building with 16-foot ceilings, so living there will be a cool experience,” Blevins said. “The original ceilings and columns are there and will remain exposed. There’s old brick and massive windows. There’s a very real sense of history that you can feel.”

With HTCs involved, Reed Realty Group paid close attention to the details. The result will be impressive.

“It’s a massive place with an important social and industrial history,” Blevins said. “This mill was just coming online when the famous 1912 Bread and Roses strike took place in Lawrence, which was a seminal moment in the history of the American labor movement. It’s humbling that people will be living in beautiful lofts where generations of people once labored. The wool mills built Lawrence and now they can continue to add to the vibrancy of the city.”

“All of the finishes in the units are what you expect in market-rate homes–granite countertops, stainless steel appliances, tile bathrooms, nice carpet,” said Blevins. “We really try to build units that look and feel no different from market-rate homes.”

The seven-story building will have parking in the basement and the first level. The first phase includes the parking and 180 apartments. Planning and zoning restrictions made the developers look inward for parking solutions.

“People are always surprised to hear that licensed structural engineers would endorse our plan to park two floors of a 108-year-old wood-and-brick building with vehicles,” Blevins said. “When you look at historic photographs from inside the building, though, you see that what used to be there was row after row of mill equipment the size and weight of locomotives, lined end to end on every floor of the building. Holding up a few hundred cars and SUVs doesn’t make the old building break a sweat.”

“Scott [Reed] was an existing new markets tax credit customer of ours so that’s how we got introduced,” said John Lisella, vice president at U.S. Bancorp Community Development Corporation (USBCDC), the sole investor in tax credits for the property. “This was one of the initial workforce housing allocations by MassHousing and in looking at the market and projecting for that area, this was a good development.”

“It was an interesting time to do a tax-exempt bond deal, right on top of tax reform,” Lisella said. “That was in interesting time, because historic tax credits [which were at risk during tax reform] were involved, too. There was a lot of discussion of items that you didn’t need to be concerned with before tax reform. But now we know what the rules are.”

The challenge of combining tax credits was an issue, but Reed Realty Group focuses on financial structures that twin tax credit subsidies.

Massachusetts’ workforce housing initiative, launched in 2016 with a goal of creating 1,000 workforce-housing units, was a significant part of the transaction.

“In terms of the capital stack, this is very normal for us,” Blevins said. “Historic properties are challenging for myriad reasons and you have to have a little expertise and a whole lot of creative perseverance in putting together financing. We are also big believers in mixing affordable and market-rate housing. The only new elements in this project are state-funded workforce housing– which is new to everybody in Massachusetts–and the fact that this is our first project anywhere in New England.”

Construction started this year and the first phase should be done in late 2019. The second phase will quickly follow.

“Winn Residential has signed on to manage the property and we have worked closely with them,” Blevins said. “They anticipate such demand that they made us get a pre-leasing website and a temporary leasing office, so that we can demonstrate demand and begin construction on the additional 96 units of Phase 2 very quickly. We’d like to start Phase 2 in six months.” 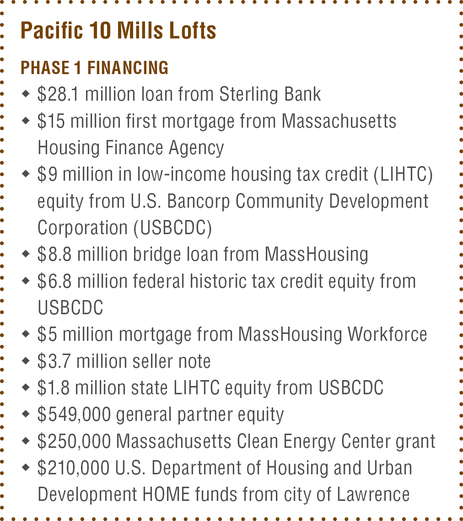