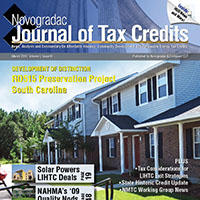 The U.S. Department of Housing and Urban Development (HUD) announced in January the awarding of $1.93 billion to nearly 60 entities — states, local governments and not-for-profit housing developers — in the second round of the Neighborhood Stabilization Program (NSP). NSP provides competitive grants to revitalize neighborhoods devastated by foreclosed and abandoned properties.

HUD received a total funding request of $15 billion from applications submitted last year. Applicants proposed strategies to restore at-risk communities and described their capability to disperse the tax dollars needed to carry out the plans.

In 2008, HUD awarded $3.9 billion under the first NSP grants (NSP-1), which were authorized by the Housing and Economic Recovery Act of 2008. The second round of funding (NSP-2) was authorized by the American Reinvestment and Recovery Act (Recovery Act). The Recovery Act also made some changes to NSP’s regulations and the allocation process, but the eligible uses and goals of the program remained the same.

Fund recipients will acquire foreclosed properties and form or continue partnerships with developers to rehabilitate and convert the properties into affordable housing. Administered by the grantees, the funds can assist low- to moderate-income homebuyers with closing costs and down-payments. The grantees can use the funds directly to establish land banks for foreclosures and restore or demolish vacant or blighted properties. HUD stipulates that all funding must benefit households with income levels at or below 120 percent of the area median income (AMI). At least 25 percent of the total award must benefit households earning a maximum of 50 percent of AMI, resulting in the creation of rental opportunities under the program.

Arizona Department of Housing
The state of Arizona received more than $38.3 million in the first round of NSP allocations, and set aside $9.5 million of that amount for rental programs. The department received a handful of applications from developers after issuing the first notice of funding availability (NOFA) last December. The Arizona Department of Housing (ADOH) released a second NOFA for redevelopment of multifamily rental housing on February 1.

Most of the funding under the first NOFA went to assistance for single-family homebuyers, said Randy Archuleta, ADOH’s rental programs administrator. “That went pretty quick,” he said, noting that ADOH now has to find foreclosed, abandoned and blighted properties to convert into rental units, thereby satisfying NSP requirements. “That makes it a little more complicated; that and targeting renters at 50 percent AMI,” he said. One of the developers who applied to ADOH in December met the NSP eligibility criteria and the deal is expected to move forward. Archuleta says that upon completion, the development will create approximately 25 units with 15 set aside for renters at or below 50 percent AMI, using an estimated $2 million of the remaining funds.

ADOH is searching for two or three more qualified applicants, before September 15, to meet the program’s 18-month time limit for assignment of funds. Unlike NSP-2, first round grantees have four years to spend the money, awardees of the second round have only three years to use the entire amount. ADOH did not apply for a grant in the second round of NSP funding.

After the NSP-1 allocations, Weiss said NHS was unable to acquire certain foreclosed properties in Miami-Dade County because the developer had to wait for the county’s approval. Sometimes approval did not come for weeks, and by then the properties had been sold. The changes in NSP-2 eliminated this problem by opening the applicant pool to not-for-profit developers. As such, NHS received NSP-2 funds directly and gained more control over the timeline.

“The NSP-2 money went to whoever wanted it and could use it,” Weiss said, noting the Recovery Act’s removal of a government agency as the middleman. “It was much more competitive this time around.”

NHS is the lead agency in a consortium of six not-for-profits and the city of North Miami in Miami-Dade County, Fla. The consortium was awarded an NSP-2 grant of approximately $89.4 million. It plans to use the funds to rehabilitate nearly 1,300 units across 73 census tracts with high numbers of foreclosed or abandoned properties, according to the application. Of the rehabilitated units, 540 will be set aside for rental housing and 425 units will be redeveloped from abandoned or demolished properties. But NHS director Arden Shank says the consortium hasn’t ruled anything out yet.

“Now we’re seeing what works locally as well as nationally,” Weiss said. “HUD’s aggressive timetable is the same [as NSP-1], and the goals and initiatives are the same. But I think we’re going to see more creativity in how the money is put to use this time, and better leveraging of funds.”

The notion behind NSP is to create more balance between supply and demand in these key central cities, said Rick Ballard, director of the state’s Office of Community Development. He notes that Michigan has 93 census tracts paired with land banks so MSHDA can control the supply by taking these foreclosed properties off the market for the short term.

Home values in those 93 targeted census tracts have decreased by as much as 52 percent, according to the consortium’s application. The consortium plans to use 39 percent of the NSP-2 grant to purchase and rehabilitate 6,250 properties within the area. Nearly 30 percent of the total funds will be used to reserve more than 700 rehabilitated homes for households at or below 50 percent of AMI.

“We hope to figure out a better strategy than long-term rental housing,” Ballard said, noting that one strategy will be looking at single-family housing and coming up with a short-term lease-purchase model to move families into homeownership.

MSHDA plans to evaluate the housing stock within the census tracts to determine where to create or rehabilitate rental units, Ballard said, but multifamily housing developments are somewhat scarce in Michigan, where many neighborhoods are made up of single-family homes.

Although meeting the requirements can be challenging, Ballard is optimistic about the opportunities NSP provides and says MSHDA can use these resources to achieve a new level of green construction. “It would be great if we could come out of this with demonstrations of what we can accomplish in energy savings for low-income housing,” he said.

Evolving Attitudes
NHS’s Weiss notes that in the past, the knee-jerk reaction of development planners to the dramatic housing need would be to renovate deteriorating properties, not tear them down. “Now there’s discussion on a national level about demolishing properties and land-banking for the future as we wait for the market to get stronger,” she said. “The mindset is entirely different from five years ago.”

For more information about the program and a complete list of NSP-2 grant recipients, visit www.hud.gov/recovery.