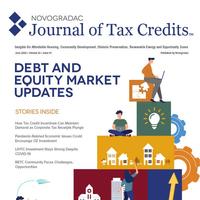 This issue of the Novogradac Journal of Tax Credits examines the tax equity market for affordable housing, community development, historic preservation and renewable energy tax credits as we near the midpoint of a historic year in America.

The nation faces a significant recession due to the economic ravages of the COVID-19 pandemic, a recession that will affect the equity market for multiple community development and affordable housing tax incentives.

To assess the depth and length of reduced investor demand, it’s instructive to revisit the Great Recession and its effects on aggregate federal corporate income tax receipts (which equate with corporate tax payments) and the associated declines in tax credit equity pricing. From there, after reviewing current projected federal corporate income tax payments, we can review each of the major tax credits and see potential effects of a short-term drop in corporate federal tax liability–and consider how to mitigate those effects. 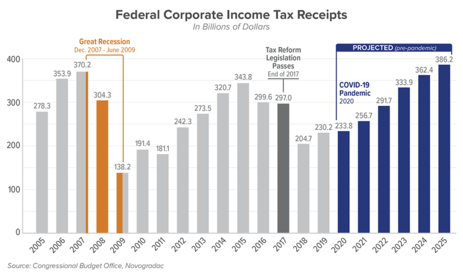 During the most recent major American economic slump–the Great Recession of 2007 to 2009–investment in tax incentives fell. Much of the decline in investment was due to a sharp decrease in federal corporate income tax liability from 2008 to 2009, when corporate tax payments plunged from $304.3 billion to $138.2 billion, a 55 percent decrease. Tax credit equity pricing declined to the low 70-cents-per-tax-credit-dollar range for some low-income housing tax credit (LIHTC) developments and to a similar range for some new markets tax credit (NMTC) financings.

It’s far too early to know whether a 55 percent plunge in corporate tax payments will happen this time. This downturn appears different from the Great Recession, which saw Fannie Mae and Freddie Mac go into conservatorship, many public companies going out of business and fears that many other corporations would experience a similar fate. The Great Recession was driven by a financial markets crisis and the expected COVID-19 recession will be caused by a health issue, which may mean a much shallower plunge and a more rapid economic recovery.

After recovering from the Great Recession, annual federal corporate tax payments were between $297 billion and $344 billion for the years 2015 to 2017. Then, 2017 tax reform legislation led to a 40 percent decrease in federal corporate tax receipts in 2018 (from $297 billion in 2017 to $204.7 billion in 2018). A significant part of the 2018 drop in federal tax receipts, beyond the drop in the corporate tax rate from 35 percent to 21 percent, was that taxpayers could immediately expense personal property. The effect of the rapid-expensing tax law change is expected to gradually ramp down from 2019 to 2022. The combination of the burnoff of depreciation expense and (pre-pandemic) anticipated economic growth was projected to lead to annual increases in corporate income tax liability for the rest of the 2020s, rising to $386 billion by 2025, per a March 2020 forecast by the Congressional Budget Office.

However, the expected recession will likely again create a drop in corporate tax liability.

The impact of a drop, hopefully temporary, in federal corporate tax liability on pricing of tax credit equity varies among the various incentives–with the effect somewhat mitigated for those credits claimed over a longer period and for those where the initial year is 2021 or later.

For instance, the renewable energy investment tax credit (ITC) is a one-year credit, but isn’t claimed by a taxpayer until renewable energy property is placed in service. That means that investments made for properties that begin construction this year might not be claimed until 2021 or later, when the economy will have presumably improved. Similarly, investors in historic tax credit (HTC) or LIHTC properties won’t be able to begin to claim credits until those developments are placed in service–and the credits will be claimed over time (five years for the HTC, 10 years for the LIHTC). For NMTCs, on the other hand, the seven-year credit stream begins being claimed when an equity investment is made.

However, a quick rebound with steady growth in corporate tax liability, as seen after the Great Recession, isn’t guaranteed. A quick rebound also doesn’t eliminate investor concerns about being able to use tax credits this year and potentially next year.

To bolster the tax credit equity market, the tax equity community is advocating for several temporary federal tax changes to help during the transition to recovery. These proposals would help assure investors they will be able to use credits over the near term. From a budgetary perspective, it is important to note that these initiatives don’t have a meaningful cost over the 10-year congressional scoring period.

Allow More Corporate Tax to be Offset by Credits

That provision ensures that large corporate taxpayers cannot reduce their corporate income tax liability to zero, a desirable objective for many policymakers. However, it also creates a limit to tax credit investing–and in 2020, that limit could be impactful. Many existing investors may find the anticipated decline in their 2020 tax liability means they cannot use all of the 2020 tax credits expected to be generated from their existing tax credit investment portfolio, at least under current law.

An additional option to bolster investor demand is to increase the number of years for which credits can be carried back.

Current law allows general business credits to be carried back one year, but that hasn’t always been the case: there was a three-year carryback until 1997. Extending the carryback period to three years or even five years would mean many taxpayers could confidently continue to invest in affordable housing, community development, historic preservation and renewable energy, knowing that if their corporate tax liability is insufficient to fully use current-year tax credits, since those tax credits could offset taxes paid in earlier years.

To minimize the impact, Congress could make the change effective only for tax years affected by the pandemic. A recent precedent exists: the Coronavirus Aid, Relief and Economic Security (CARES) Act included a provision allowing net operating losses from 2018, 2019 or 2020 to be carried back for up to five years.

Congress could make business tax credits refundable–allowing taxpayers to invest beyond their tax liability and receive money from the federal government to cover the difference.

There are political considerations, too. Congressional Republicans have expressed taxpayer compliance concerns with refundable credits and many Congressional Democrats would likely oppose refundable business tax credits.

During the Great Recession, some banks and other tax credit investors faced an existential crisis. That was amplified when Fannie Mae and Freddie Mac–which made up nearly 40 percent of the annual LIHTC investment market–pulled out of LIHTC investing shortly before being put in conservatorship, as noted above.

The cause of the pandemic-related recession is different from the Great Recession and at the time of this writing, Congress wasn’t expected to immediately step in to provide a short-term cash grant option.

The Internal Revenue Service (IRS) has already played a role in calming equity markets with rulings providing COVID-19 relief. The IRS now needs to follow-up by issuing additional guidance to further ensure tax-credit developers and investors that COVID-19-related challenges won’t result in the disallowance of tax credits. Such guidance would go a long way in assuaging current and prospective investors’ concerns about the effects of COVID-19 on existing and future tax credit investments.

The Community Reinvestment Act (CRA) has played a significant role for investors in affordable housing and community development tax incentives: It’s estimated that at least 85 percent of annual LIHTC and NMTC investment is made by CRA-motivated banks.

The Office of the Comptroller of the Currency recently released updated and final CRA regulations. The effect of these regulations on the motivation of many banks to make tax credit investments remains to unfold. Many affordable housing and community development stakeholders have expressed concern that the final regulations will have an adverse effect on investment levels and tax credit equity pricing, which is yet another reason for Congress to act on legislative efforts to bolster investor demand for tax credits.

History suggests that if no changes are made, the coming recession will result in lower demand for affordable housing, community development, renewable energy and historic preservation tax credits. However, legislative and regulatory modifications would help mitigate that effect.

By increasing the percentage of tax liability against which taxpayers can claim credits and extending the carry-back period, Congress can help sustain demand for tax credits during the period of economic recovery. Additional IRS regulatory relief would also bolster tax credit equity demand by allaying investor concerns.

Combining RETC and LIHTC: Structures, Timing and Allocation Considerations
Everything You Need to Know about State LIHTCs in 2022
Knowing What Makes a Property Unique, Distinct is Vital in the Preservation of Affordable Housing
END_OF_DOCUMENT_TOKEN_TO_BE_REPLACED