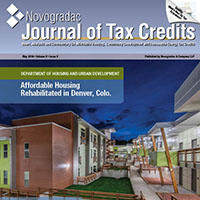 The solar power market has come into its own in a big way. Analysis of four years’ of data from more than 200 properties audited by Novogradac & Company reveals that, with the help of the renewable energy investment tax credit (ITC), the cost of solar power has fallen dramatically. The ITC is not the sole reason for solar’s cost declines; the increasing supply of solar panels and the reduction in the cost of raw materials, such as polysilicon, for example, was also crucial. However, overall the ITC seems to be contributing to the decreasing cost of generating solar electricity.

Average Cost per kW, Year by Year
The cost per kilowatt (kW) measures the amount of money it takes a solar producer to generate one kW of electricity. This is an important metric because it measures the cost of the end product: electricity. Solar has experienced tremendous progress on this front. Novogradac data shows that in 2010, the average cost per kW was $7,485. Costs fell by almost 20 percent in 2011, reaching to $6,042 per kW. The decline in cost was less precipitous in 2012. The cost per kW fell by 12.3 percent to $5,298. In 2013, the market seemed to shake off the mild slowdown from 2012. Novogradac data shows that solar costs decreased by almost 26 percent, down to $3,942 per kW. From 2010 to 2013, solar cost per kW declined by a total of 47 percent, or $3,542. The average decline per year was 19 percent, or $1,180.

Cost per kW for Different Types of Systems
Another way to measure solar cost efficiency is to delineate between the three different types of systems: commercial, residential and utility.

Cost by Size of Systems
A key consideration in examining these costs is the size of the solar installation, which is measured in kW capacity. Generally, a large solar energy property is one that is above 1,000 kW, and a small system is generally one with less capacity than that. Examining the cost trends for large and small properties can reveal whether there are significant differences between their cost decline rates.

Industry Context
On March 5, the Solar Energy Industries Association (SEIA) released data on quarterly pricing for solar energy costs per kW between 2010 and 2013. While the data is not exactly comparable, it still provides an interesting guidepost. SEIA found that between 2010 and 2013, costs per kW for residential energy properties fell by 28 percent. This is roughly in line with Novogradac’s estimated 24.3 percent decline in costs per kW for residential energy properties. For commercial properties, SEIA found that costs per kW fell by 34.9 percent. While this figure is significantly lower than the 57.1 percent decline estimated by Novogradac, it remains in line with the general trends of strong cost decline across all sectors and stronger cost decline for commercial properties than residential properties.

SEIA’s data also allows for the trending of Novogradac & Company’s data. For example, if the average price per kW in 2005 was $10,000 and in 2014 the average price per kW was $5,000, then the trend is that prices in 2014 are 50 percent of the prices in 2005. This method, called “trending averages,” can be applied to Novogradac’s data to establish what the prices of past systems would be in the first quarter of 2014. The result of applying trending averages to Novogradac data, broken down by system size, can be seen on page 66.

Conclusions
The cost of producing solar energy has plummeted in the last few years, across all types and sizes of projects. Commercial and residential solar energy systems generated electricity at a lower and lower cost. Production costs for electricity from both small and large solar systems declined between 2010 and 2013, albeit not at the same rate. While the link is not entirely causal, there is strong evidence to suggest that the ITC is at least partially responsible for this cost decline.

May 4, 2021: What CDEs and Qualified Businesses Should Be Doing Now to Prepare for the Next NMTC Application Round
Posted on May 4, 2021
April 27, 2021: Maximizing the Benefit of State and Local Tax Incentives and Exclusions for Renewable Energy Properties
Posted on April 27, 2021
April 20: 2021: Understanding Provisions of the Affordable Housing Credit Improvement Act of 2021
Posted on April 20, 2021
END_OF_DOCUMENT_TOKEN_TO_BE_REPLACED