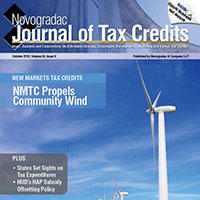 On Sept. 4, in what is widely considered the most important court ruling to date concerning the use of the federal historic tax credit (HTC), the 3rd Circuit Court of Appeals overturned the Jan. 3, 2011 Tax Court decision that had held for the taxpayer in Historic Boardwalk Hall v. Commissioner (HBH). The court concluded that the investor, Pitney Bowes, was not a partner because it had no real prospect of an upside and was fully protected from any downside risks.

The court did state that it was not the federal HTC that was under attack. And the judges were careful to say that investors have a right to seek mitigation of their investment risks. What they found unacceptable was that, in the court’s opinion, Pitney Bowes had no risk whatsoever. A complete summary of the facts of the case can be found in the February 2011 edition of History and the Hill at http://bit.ly/QjOU4U.

The judges appear to have been heavily influenced by the facts and circumstances of this case. Significant investor pay-ins were timed to begin only after construction expenditures had generated enough credits to equal the amount of the intended tax credit equity investment. Deep-pocketed entities related to the state of New Jersey provided guaranties against cost overruns, recapture, operating deficits, disallowance and nonpayment of priority returns and the put.

While these guaranties are standard in most HTC and other tax credit transactions, the investor in this case also funded from its own equity pay-ins, a reserve for priority returns in the form of a guaranteed investment contract. And entities of the state of New Jersey also had the unusual right to force a compliance period exit of Pitney Bowes if any disagreement arose over Boardwalk Hall’s operations. This set of both traditional and unusual rights and guaranties, along with a damaging set of memos and emails, gave the transaction the appearance that it was engineered for success.

The Industry Impact
The impact on the HTC industry has been immediate and painful. Because of their similarity to the HTC, solar investment tax credit (ITC) projects have also been significantly impacted. The experience of my own company, National Trust Community Investment Corporation (NTCIC), should be illustrative of the wider industry effect, because nearly all of NTCIC’s transactions involve historic buildings that qualify for the federal HTC.

From Sept. 4 through Sept. 11, closing calls on seven transactions were canceled while law firms huddled with their opinion committees to decide what a post-HBH deal should look like. These projects involve six different investors and five separate law firms. The week-and-a-half period of uncertainty put a lot of stress on developers trying to meet future tenant move-in dates or anticipating equity pay-ins to keep construction on schedule. We have seen one developer, out of frustration with his investor, close on a construction loan and begin construction without balanced sources and uses in the hope of securing an HTC investor after the market settles down. We have seen another developer threaten to secure a substitute investor to replace a committed investor that could not deliver an answer fast enough on how it would deal with the HBH decision.

To the credit of the HTC industry’s leading law firms, by Sept. 12, client memos outlining generic HBH compliance recommendations had been issued followed by proposals for specific adjustments to projects in closing. As of this writing, HTC investors were using law firm proposals to obtain credit committee re-approvals for deals in closing. Some investors have taken the next step of asking senior management to re-approve their HTC investment platforms with a different risk profile. Other companies have been less clear about their future direction.

In general, however, HTC investors have reacted relatively calmly to HBH and most appear ready to consider a higher risk profile in these transactions in exchange for more robust upside potential. As of this date, we have seen no immediate impact on credit pricing. Clearly, it is early and this is an evolving situation.

Fixes for HTC Deals in Closing
For legal advice on ways to ensure that your project is structured to comply with HBH, I highly recommend that you read Forrest Milder’s column, The Current, on page 73 of this issue. The immediate outcome for NTCIC’s projects in closing has been quite varied, depending on the pre-HBH partnership structure, pay-in schedule and guaranties. Changes have generally focused on accelerating pay-in schedules, creating an investor opportunity for upside and limiting traditional investor guaranties to differentiate transactions as much as possible from the facts in Historic Boardwalk Hall.

One of our single tenant office projects will proceed with an initial pay-in at construction closing of 10-20 percent, the elimination of a previously planned year four pay-in, and a significant funded operating reserve with burn-off in lieu of an unlimited developer operating deficit guaranty. A mixed-income housing (non-low-income housing tax credit (LIHTC)) project with nonprofit office space that will use both HTCs and new markets tax credits (NMTCs) will close with almost no changes, because the HTC investor had already planned to pay all of its HTC equity in at construction closing.

Another NTCIC mixed-use (mixed-income housing, retail and office) project has been given a variety of adjustments to consider and choose from. They include a 20 percent upfront pay-in of HTC equity that could be reduced to 10 percent, taking into consideration that the HTC/NMTC investor is also a bridge lender. No changes to completion or environmental guaranties are recommended. The developer’s operating deficit guaranty is proposed to be capped after stabilization and burned off through the compliance period. A previous 3 percent priority return may be restructured as a 1 percent preferred return, a net cash flow sharing of up to 5 percent if available, and a split of residuals thereafter. The law firm’s client memo recommends avoiding any control of cash flow through a master subtenant or a “pay-as-you-go” five-year equity funding schedule. The investor on this transaction is evaluating its options, and will then seek project re-approval if it deems the changes on balance to be material enough.

A solar transaction using a master tenant legal structure and no significant equity pay-ins until the solar panel installation is in service may be restructured with a 20 percent pay-in up front and a stronger potential cash flow upside for the investor. Because of close coordination between the lawyers and the investor in this case, this solar ITC project will close as originally scheduled in late September.

Special Impact on Nonprofit Transactions?
In the HBH transaction, the managing member of the LLC was an affiliate of a government agency, and the historic hall was rehabilitated as a public facility. The appeals court did not rule on the economic substance of the transaction, and the decision cites Footnote 344 in the Joint Committee on Taxation’s “Technical Explanation of the Revenue Provisions of the Reconciliation Act of 2010, as Amended, in Combination with the Patient Protection and Affordable Care Act” as its justification for separating the issues of economic substance and partner status in this case.

As Forrest Milder noted in an April 21, 2010 Nixon Peabody Tax Alert on the codification of economic substance and Footnote 344, “Thus, for example, it is not intended that a tax credit […]be disallowed [for lack of economic substance] in a transaction pursuant to which, in form and substance, a taxpayer makes the type of investment or undertakes the type of activity that the credit was intended to encourage.”

The inability of HBH, and presumably of other nonprofit sponsored projects, to show projections with a true economic upside would appear to be protected by the reference to Footnote 344 in the 3rd Circuit Court of Appeals decision, but early client memos from top HTC law firms have emphasized the need for the investor to have a real possibility rather than just the opportunity for upside cash flow. More work needs to be done in the coming months to protect the ability of nonprofit sponsored projects—often the transactions with the strongest economic development impact—to use the federal HTC.

The Need for Treasury Guidance
If there is a silver lining in Historic Boardwalk Hall v. Commissioner, it is the increased urgency with which the Historic Tax Credit Coalition (HTCC) is pursuing the idea of a revenue procedure to create a safe harbor for HTC transactions. A draft is already being circulated among investor, legal, accounting and developer members. (If you want to have an influence on this effort, currently in high gear, now would be a good time to join the HTCC at http://historiccredit.com/join-the-htcc/.) The negative and high profile outcome of HBH should do much to dampen the old legal adage, “Be careful what you wish for.” It’s already here.