The iconic blue flame is returning to downtown El Paso, Texas–and it will bring along 120 affordable apartments and nearly 40,000 square feet of commercial space in what will be called the Blue Flame Apartments.

“I’ve never seen this kind of excitement about things we’ve done,” said Gerald Cichon, the CEO of the Housing Authority of the City of El Paso (HACEP), which is developing the property as part of its plan to convert its entire 6,100-unit inventory through the U.S. Department of Housing and Urban Development’s Rental Assistance Demonstration (RAD) program. “Everybody wants to know, ‘are you going to light the flame?’ Everybody has a memory of the building and there are so many stories. People are excited that we’re going to bring it back to life.”

The Blue Flame Apartments are in the former home of the El Paso Natural Gas Co., which featured the 21-foot flame atop its building–a flame that changed color to indicate a coming change in the weather. Blue indicated no change, red meant warmer weather, gold meant cooler weather and flickering lights meant wind, rain or snow.

“In talking with people, you get the feeling that this is an iconic building in El Paso,” said William Teschke, a director of project management at Hunt Capital Partners, the syndicator in the development. “Many people remember the flame changing colors based on weather patterns. The building has been vacant for years since the gas company left, so people are excited about restoring the flame and bringing it back.”

The $55.3 million development, which is largely financed through low-income housing tax credit (LIHTC) equity and federal and state historic tax credit (HTC) equity, is new ground for HACEP, but brought back some familiar partnerships.

‘Thinking Caps’ Lead to a Deal

HACEP is a little more than halfway through its RAD conversion and the 18-story building is its first high-rise. The property will replace existing HACEP senior housing at the 139-unit Pooley Apartments.

“El Paso has been going through a renaissance downtown,” Cichon said. “We just got a Triple-A [minor-league baseball] stadium that’s a few blocks away and a park that’s near the building is being rebuilt. There’s also a 1950s-style trolley system and we got a professional soccer team. The revitalization of an existing building in an area where there’s a massive influx of money coming in is important. This is the time for affordable housing to get in, before families are priced out. We wanted to be in the middle of the revitalized area.”

HACEP looked at renovating the Pooley Apartments, but the financing didn’t make sense–which led to an opportunity.

“We saw the gap with 4 percent credits for the Pooley building and saw how we could do better, so we put on our thinking caps,” Cichon said. “The Blue Flame came to us and we sat down with the owner, Paul Foster, one of the leading philanthropists in El Paso. He liked helping the elderly and started with that.”

HACEP purchased the building for $2.5 million, applied for 9 percent LIHTCs and began plans.

Image: Courtesy of Housing Authority of the City of El Paso
When completed, the renovation of the former home of the El Paso Natural Gas Co. will host 120 affordable apartments, as well as commercial space.

The 18-story downtown high-rise was built in 1954 as the headquarters of the El Paso Natural Gas Co.

“In the 1950s, this was the signature building in El Paso,” said Mahesh Aiyer, director at Citi Community Capital, the investor in the federal LIHTCs and HTCs. “The Blue Flame was well-known for a long time.”

El Paso Natural Gas moved its headquarters to Houston and began a period when the building was occupied less often than it was vacant.

“In the last 25 years, the building has been empty except for about five years,” Cichon said. “It’s a massive, dark building.”

The Blue Flame Apartments will include 120 affordable apartments for residents earning 30, 50 and 60 percent of the area median income. The property will also feature 39,672 square feet of commercial and office space: commercial on the bottom floor, office space on floors 14 through 18 and likely a restaurant on the top floor.

“The more typical [mixed-use] projects we see consist of ground-floor retail and apartments on top,” Teschke said. “In this case, the lobby–and some commercial space–are on the ground floor but you also have several floors of commercial space above the residential floors. There is a wide range of possibilities for use of that space. Meanwhile, you still have brand new affordable apartments with great city views occupying the middle floors.”

The residential portion will include a community room with a common-area kitchen, central laundry facilities, elevator access, a fitness center and controlled security access. There will be resident services coordination including adult education, character building, financial planning and health classes as well as social activities.

While the complex isn’t designated for any specific group, Cichon knows what to expect.

The combination of LIHTCs and HTCs brought a few challenges.

“There’s a placed-in-service deadline of Dec. 31, 2019, imposed by the 9 percent LIHTC financing, which really puts stress on the construction schedule, given all of the work involved with a historic rehabilitation-adaptive reuse project of this magnitude,” Teschke said. “There was actually some abatement and demolition work completed prior to the financial closing under a separate construction contract to ensure the entire project would be completed by the deadline.”

According to Cichon, few things needed to change to make it work, though.

“Anytime you tackle a historic building, you do things you don’t [initially] want to do, but you do what works out best,” Cichon said. “When we tackled this, there were aspects of the 16th floor–the executive office had to stay and the interior wall needed to stay–that made it difficult.

“The historic tax credits made it viable,” Cichon said. “That brought in extra funds that were needed.”

The key partners in the transaction–HACEP, Hunt and Citi–are familiar with each other.

“We’ve syndicated the tax credits on roughly half of HACEP’s RAD conversions,” Teschke said. “Each project is different and presents its own set of challenges. The commercial element and adaptive reuse of an office building both made the Blue Flame project a little more complex than most. Without question, our familiarity with HACEP and Citi made it easier to work through the difficulties involved in underwriting and closing a transaction like this.”

Citi has also been involved in HACEP investments throughout its conversion through the RAD program and Aiyer said this deal–replacing an aging public housing structure with the renovation of another property–was familiar.

For HACEP, this is the first high-rise building.

“It’s all in one location and having it close to all the [city’s] infrastructure is critical,” Cichon said. “I love the fact that it’s our first commercial and residential building with office space. It’s a great mix of something we haven’t tackled before. It’s a high-rise in El Paso with amazing views.”

“I’m extraordinarily amazed at how well this was put together and how timely it got closed,” Aiyer said.

‘People Talk about the Flame’

The housing is the most important part of the deal, but the flame brings the most interest. It’s 21 feet high and made of steel and Plexiglas. During the glory years, it was manually changed, but Cichon expects Internet-based technology to play a role now.

“For me, the most exciting part and what everybody talks about is the flame,” Cichon said. “You would know the weather for the next day. For us to rebuild it in the 21st century is great. Our plan is to increase its functionality. It’s kind of like the ball drop in Manhattan. We’d like it to change for big days–for instance, to have it red, white and blue on the Fourth of July. On normal days it would be for the weather.”

“What I like best is that this is an iconic, historic building that is being preserved in a premier downtown location that is experiencing significant redevelopment that will benefit the entire community,” Aiyer said.

Nick Hoehn, a partner in Novogradac & Company’s Austin and El Paso offices who worked with HACEP on the transaction, said this is a unique property.

“HACEP is not only preserving an iconic building in El Paso, they are providing much-needed affordable housing in an area where that will be difficult to do soon,” Hoehn said. “People in El Paso will love this development.”

“The flame is as much of a historic landmark as the building itself,” Teschke said. “On one hand, HACEP is restoring that landmark by lighting up the flame on top again. On the other, they are repurposing a vacant office building in a prime downtown location and turning it into affordable apartments and commercial space.” 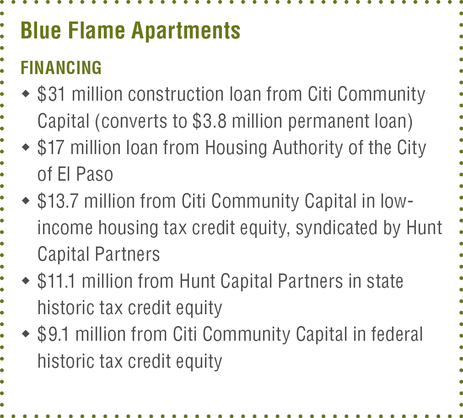