Gallman Development Group knew the M.C. Kiser Building, a former shoe manufacturing facility in the south side of downtown Atlanta, would be a perfect fit for market-rate apartments.

“We want to be one of the first into an area and help to spark redevelopment,” said Bill Gallman, chief operating officer of Gallman Development Group. “We felt this area was on the cusp of a major redevelopment.” Gallman added that this is among the first market-rate loft apartments built in this area in the past decade.

Built in 1923, the M.C. Kiser Building housed the M.C. Kiser & Company shoe manufacturer and storefront for about a decade. A number of manufacturing companies occupied the space until 1969, when it was used by the Atlanta Public Schools until 2003. The property has been sitting vacant since.

Soon it will house the Kiser Building Lofts, a 41-unit housing development just one block from both City Hall and Georgia State University. As such, Gallman said he envisioned government employees, young professionals and students as the residents of Kiser Building Lofts. As more millennials move to downtown Atlanta, Gallman hopes the development helps create a “live-work” environment in the downtown corridor.

Kiser Building Lofts will have 36 one-bedroom apartments and five two-bedroom apartments. The homes will feature solid-surface countertops, contemporary cabinets, wood floors, large windows and some apartments will have large walk-in showers. Common amenities will include a large roof deck on top of the annex, which was built in 1970; an outdoor kitchen and barbecue area; a lounge area with seating and tables outside; along with a water feature.

Redevelopment began in January and will be complete in November. Gallman said that the framing is done and now his team is hanging Sheetrock. Much of the plumbing and electrical work has also been completed.

As in all historic structures, Gallman said preserving the windows were very important. The large, factory-style windows are being preserved and replaced when necessary. Gallman said the large windows, which bring in plenty of natural light, were a major reason this building is functional as housing. He added that the ornate terracotta work on the exterior is also being preserved.

To help oversee the historic preservation work, Gallman brought on Ray, Ellis & LaBrie Consulting. Other preservation work includes uncovering the false fronts built to cover up the original storefronts on the first floor of the building, preserving the 2.5-inch-wide wood floor panels and replacing them when necessary, and repairing the exposed wood beams on the interior of the building. Marion Ellis, senior historian and partner at Ray, Ellis & LaBrie Consulting, said some of the beams failed structurally in a couple of places. But those beams are being replaced with wood replicas and not steel beams. 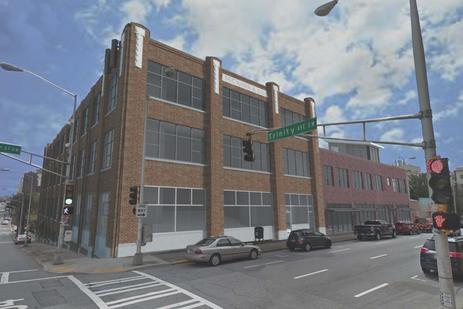 Image: Courtesy of Gallman Development Group
Kiser Building Lofts is a 41-unit market-rate housing development in the south side of downtown Atlanta.

Brian LaBrie, architectural historian and partner at Ray, Ellis & LaBrie Consulting, said the brick masonry exterior was preserved. He also noted that the plaster walls on the first floor and the painted brick walls on the remaining floors were preserved. He said the different walls are a notable historic feature because, “people can see that different levels had different uses.” The first floor had more decorative plaster walls because that floor featured the old storefront, while the factory portion of the development had the much simpler painted brick walls, said LaBrie.

LaBrie said that one challenge came when trying to add windows to the exterior of the building. “We had to find a way to install new windows without taking away from the historic structure,” said LaBrie. On the other hand, Ellis said that one positive was that the fairly open floorplan made it easy to convert the manufacturing space into housing. “Subdividing space in a historic structure is better than the other way around. Tearing down walls is much harder,” said Ellis.

Churchill Stateside Group (CSG) was the syndicator for the federal and state historic tax credits (HTCs) and provided a unique financial package to the capital stack. CSG provided a $7.7 million construction loan, a $6.7 million fixed-rate permanent loan and $1.8 million in federal and state HTC equity. “I can’t overemphasize how efficient our package is. We provided debt, equity and fixed-rate financing, which is hard to find [all together] in the marketplace. By providing all financing sources, we can make the deal more efficient and allow for midsized deals like this to be more accessible to investors,” said Keith Gloeckl, CEO of CSG.

Alex Holverson, production manager at CSG, said there are a lot of, “larger, headline historic buildings that receive tax credits,” but he was excited to preserve a “middle-market” building that allows investors with an appetite under $5 million to participate. Gloeckl said CSG is strategically positioned to find equity investors interested in the smaller developments. “Kiser Lofts is going to fit into the downtown Atlanta community very well. We are excited to partner with Gallman Development Group and look forward to the success of the project,” said Dan Duda, vice president at CSG. 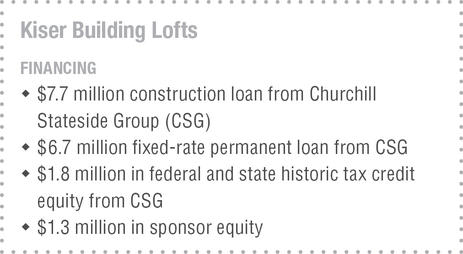