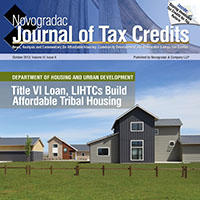 Factories from the Industrial Revolution aren’t often referred to as “beautiful” or “a developer’s dream come true.” Yet, this was how Virginia Hesse, principal historical architect at the Rhode Island Historical Preservation & Heritage Commission (RIHPHC), described the Anthony Mill in Coventry, R.I. Unlike most 19th century factories, Anthony Mill was designed by architects and it has been remarkably well preserved by its past owners. The five-story, Italianate-style former cotton mill still has its original rubble-stone and stucco walls, granite window sills, brick window surrounds, central tower and belfry.

Federal and state historic tax credits (HTCs) have helped rehabilitate the local landmark into the Lofts at Anthony Mill: 122 luxury apartments that began leasing in August. The one- and two-bedroom lofts have in-unit washer/dryers, stainless steel appliances, granite countertops and original wood floors. Community amenities include a fitness center, indoor basketball court, rooftop deck, reading room, billiard room and movie room. The transit-oriented development has a public bus stop in front of it and grocery stores within walking distance.

History
Architecture firm Stone and Carpenter built Anthony Mill on the banks of the Pawtuxet River between 1872 and 1874. The same architectural firm designed Providence, R.I.’s Union Station and Providence Public Library. The mill housed more than 33,000 spindles and nearly 740 looms when the Coventry Company operated it as a cotton mill. Today, it is one of 247 historically significant structures in Anthony Village Historic District, which is listed on the National Register of Historic Places.

Anthony Mill remained in limited industrial use through the early 2000s, at which point its then-owner submitted rehabilitation plans to RIHPHC, administrator of Rhode Island’s federal and state HTCs. The owner planned to pair Rhode Island’s 20 percent state HTC with its federal counterpart to convert the mill into market-rate residential space. RIHPHC granted the plan conditional approval, but the project never got underway because of a lack of funding, said Hesse.

That owner was unable to complete the proposed renovations, but the conditional approval entitled the building to an allocation of state HTCs. And new owners were able to use those tax credits even after the Rhode Island General Assembly suspended the state HTC program in 2008. Although new projects could not apply for the credits, Anthony Mill was already in the program’s pipeline and was allowed to grandfather the credit for future development. The mill struggled financially, changed hands a few times and eventually went up for auction, along with its tax credit reservation.

A partnership of Brady Sullivan Properties and Starr Development acquired the mill out of receivership in 2012 and worked closely with RIHPHC on the planned renovation. “After acquisition though, we still needed to secure full development financing. Fortunately, we got [the project] over the finish line,” said Chris Starr, principal at Starr Development. The project was financed with about $4 million in federal HTCs, $4 million in state HTCs and a $13 million construction loan. Rehabilitation work on the mill, which began in October 2012, created 95 construction jobs and five fulltime jobs.

Renovating Anthony Mill
Hesse said that Anthony Mill was in unusually good condition before rehabilitation work began. “There were no leaks, bats, birds or pigeons,” she said. “It was gleaming, clean, straight and true. It was really beautiful.”
Historical elements preserved through the rehabilitation include the stair tower with original staircases, wooden flooring, beams, decking and plaster. Other work included stabilizing the structure, removing paint, refinishing floors, adding new masonry and a roof deck and replacing 800 windows with energy efficient ones that match the originals.

One of the main preservation challenges was keeping the mill’s original, heavy-paneled front doors. Hesse said that the doors were beautiful but that the developer thought they presented a liability because without a glass panel, it would be difficult to tell whether someone was coming from the other side. As a compromise, the old doors were permanently mounted in an open position and a glass door system was installed in front of them. In cases where it was impractical to keep other mill doors in their frames, developers relocated them inside the building as decorative pieces.

Starr attributes the successful renovation to teamwork and said that, although Starr Development and Brady Sullivan Properties spearheaded the project, it wouldn’t have come together without the efforts of RIHPHC, National Park Service, town and state officials, financial professionals and subcontractors.

“This project saved an absolutely beautiful mill building that just as easily could have been demolished,” said Starr. “Instead we were able to preserve a historically significant and handsome mill.”

State Historic Tax Credits in the Year 2020
COVID-19 Impacts on Design and Commercial Real Estate: An Interview with Gensler and Cushman & Wakefield
Tax Implications of a Democratic Sweep in November’s Election
END_OF_DOCUMENT_TOKEN_TO_BE_REPLACED