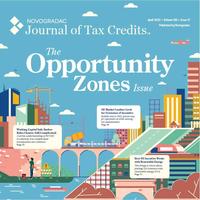 A: When considering using HTCs as part of the financing for  a rehabilitated building, one of the key decisions is if the transaction will be structured using the direct structure or the lease pass-through structure.This decision is generally made early in the process, often in conjunction with choosing an investor, as many investors prefer or require one of these structures. For that reason, it is important to understand some of the key elements of each structure and to understand the benefits to each of the parties to the transaction as well as the importance of having discussions with your legal and accounting team early in the process.

For the lease pass-through structure, there are two partnerships. The first partnership, commonly called the landlord, owns the property, incurs the QREs, has any debt obligation and is generally owned 90% by the developer and 10% by the second partnership, commonly called the master tenant (Tenant). The tenant leases the entire property from the landlord under a master lease (lease), operates the property and is typically owned 99% by the HTC investor and 1% by the developer. Under this structure, Treasury Regulation (Treas. Reg.) Section 1.48-4 allows the landlord/lessor of the property to elect to treat the tenant/lessee to have been deemed to have purchased the QREs, thus allowing the tenant to claim the HTCs. This is often referred as the landlord having passed-through the HTCs to the tenant, which then flow pro-rata between the investor and developer.

Now that we’ve covered the basics, let’s discuss some other key distinctions between the structures.

HTCs have a five-year compliance period during which the credits can be recaptured. In order to protect against this risk of recapture, HTC investors will require one of two agreements to be entered into with a lender (depending on which structure is used) to protect against this risk of recapture. In a direct structure, an investor will require a forbearance agreement which allows a lender to take certain corrective actions if necessary, but does not allow the lender to take an outright ownership of the property during the compliance period, thus avoiding recapture for the investor. In a lease-pass through structure, the investor will require a subordination and non-disturbance agreement (SNDA). There are multiple types of SNDAs which provide the investor varying levels of protection from recapture while still allowing the lender to foreclose on the property. Thus, as long as the lease stays in place, there will be no recapture. While this distinction generally has little effect on the developer, it is a key factor in how most HTC transactions are structured as it is such a crucial point for investors and lenders. It’s generally easier for lenders to get comfortable with an SNDA as opposed to a forbearance, as the lender can still foreclose on the building which is a key reason that the pass-through structure is very prominent.

Contrast that to a direct structure, whereby the investor which owns 99% of the partnership is entitled to 99% of the benefits of the partnership. However, several techniques are used to allow the developer to benefit from a significant portion of the project economics instead of based on ownership interests. The most common technique used is structuring 90% to 95% of cash flow to pay the deferred developer fee. Other mechanisms include repaying developer loans, returning some portion of developer capital or including the funding of certain reserves to minimize the amount of residual cash flow available to be distributed. If a developer is particularly concerned with the potential upside of their project during the compliance period, perhaps the lease pass-through structure may be a better fit.

One common misconception in a direct structure is the investor will be allocated the depreciation benefits, considering they own 99% of the partnership that owns the property. In many situations this is not the result, as the direct structure requires a basis adjustment of the property equal to the amount of the HTC that also reduces the investor’s capital account. For example, in a direct structure where an investor is allocated $1 million in HTCs and contributes capital of $800,000 ($0.80 per credit), the investor’s tax capital account will be negative $200,000. As a result of the investors capital account being negative, the investor will not be allocated any losses from the partnership. Conversely, in a lease pass-through structure, there is no requirement to reduce basis and capital by the amount of the HTCs. Instead, Internal Revenue Code (IRC) Section 50(d) income is required to be recognized by the partners who are allocated the HTC. Without getting too in-depth, it is income that is recognized by the recipient of the credit in the amount equal to the HTC amortized over the depreciable period of the underlying historic tax credit property, which can range from 15 to 39 years.

One clear advantage of the direct structure is its simplicity. Having just one entity that owns the property, has any debt obligation and operates the property, means there are fewer legal documents, fewer audits and tax returns and simpler accounting during the compliance period and at the investor exit, which collectively results in less cost related to syndicating the HTCs.

The above discussion is intended to provide an overview of some of the key distinctions between the two structures. There is much to consider when determining a structure and when choosing between investors the structure can be a key item to consider, so engaging your tax adviser early in the process can be a crucial step in maximizing the benefits of the HTC program for a project.

Recently Released Regulations for California’s State Historic Rehabilitation Tax Credit Available for Public Comment
Wednesday, December 21, 2022
GAAP Working Group Submits Comments on FASB Exposure Draft to Expand the Proportional Amortization Method to All Tax Credits
Thursday, October 6, 2022
NPS Report: HTC Contributed $8 Billion in Investments in 2021, the Most in Any Given Year in the History of the Incentive
Tuesday, October 4, 2022
END_OF_DOCUMENT_TOKEN_TO_BE_REPLACED