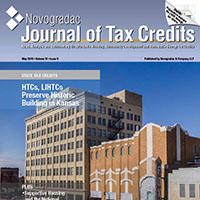 It is not uncommon in a historic tax credit (HTC) project to need an expansion of a building at the roof to accommodate specific programmatic uses or to accommodate new building systems. Construction of habitable rooftop additions or the installation of rooftop equipment, such as new cooling towers, may be possible in a HTC project, provided the construction is designed in a manner that is sensitive to the historic character of the building and contemplates the context of the building and the visual impact of the new construction. The following paragraphs identify the criteria used by the National Park Service (NPS) in assessing the appropriateness of rooftop construction and evaluating proposed designs.

Assessing Potential for Rooftop Construction
When contemplating a historic rehabilitation that will include rooftop construction, obtaining approvals early in the project schedule is important, as there are many factors that are considered in assessing additions and design changes may be required. In their review of projects proposing rooftop construction, the NPS will evaluate whether the design of the proposed rooftop construction is appropriate for the building. Any addition to an historic building must preserve the building’s character and should seek to avoid alterations that adversely impact that character. In determining whether a design is compatible, the NPS uses the Secretary of the Interior’s Standards for Rehabilitation (Standards) to assess whether proposed work is appropriate.

Buildings that have a unique roofline or a prominent roof feature may not be candidates for a rooftop addition. An example would be a building with a distinctive clock tower that rises above the roofline as a visual beacon. Adjacent new rooftop construction would impact the prominence of the clock tower, detracting from the overall character and original design intent. By contrast, a new rooftop addition constructed on a building with a simple flat roof may have no significant impact on the building if the design is accomplished in such a way that seeks to minimize visibility.

Audrey Tepper, a HTC reviewer with the NPS, said, “The National Park Service will consider the inclusion of new rooftop construction, but on a case-by-case basis only and depending on the individual circumstances of a particular building–its height, context, design, materials, etc. will all be taken into account. Therefore, we highly encourage frequent consultation (early and often!) with the state historic preservation office and the National Park Service to ascertain if a specific proposal works within preservation parameters, namely the Secretary of the Interior’s Standards for Rehabilitation. A word of caution … owners who get too far ahead with their plans for new rooftop features may run into trouble along the way and jeopardize federal tax credits, so clear lines of communication with the approving officials are essential.”

Evaluating Visibility and Design
In planning for rooftop use, all anticipated rooftop features should be documented on roof plans for submission, including new construction, equipment, railings, pergolas or any tall features. In order to evaluate the impact of rooftop construction or any tall rooftop features, it is useful to have sightline studies prepared that demonstrate the anticipated visibility from nearby vantage points. Since sightline studies are usually not entirely accurate, the NPS typically requires the construction of a temporary mockup and the submission of photographs showing the mockup in place as viewed from surrounding area.

Mockups can be achieved using flags, snow fencing or wood framing to show the outline of the proposed new construction. It can be advantageous to submit computer-generated rendering to demonstrate the scale, materials and design in the proposed location. It is important to recognize that computer-generated renderings are not always accurate, so the design team should make every effort to portray the proposed design as accurately as possible. It is important to consider the height of parapet walls and other roof features that might help to obscure the views from the street. Taking into consideration the proximity and height of adjacent buildings can also help make the case for new rooftop construction.

In assessing the appropriateness of rooftop construction, the NPS applies design criteria that consider various factors including location, placement, scale, materials and fenestration.

When evaluating rehabilitations proposing new rooftop mechanical equipment, the NPS will generally focus on the visibility of the equipment. Some municipalities require that rooftop equipment be enclosed with metal screening, though in their review of HTC projects, the NPS may not always permit screening, as the screening may be determined to add to the visual prominence of the rooftop equipment.

When assessing the impact of proposed rooftop additions, the NPS will look for assurance that the new addition is subordinate to the historic building–a rooftop addition should visually disappear, rather than dominate the historic building. Location and placement of the addition will significantly impact visibility. For this reason, the NPS generally requires that new additions be set back from the building perimeter.

Given the impact of adding a story to a small-scale building, the NPS is reluctant to approve rooftop additions on buildings that are three stories in height or less, to avoid substantial change to the overall proportions. In terms of scale, the NPS generally limits rooftop additions to one story in height as additions higher than one story are usually more readily visible. In evaluating the design, the NPS will consider whether the new addition is visually distinguishable. The new construction should be clearly differentiated from the original building, yet should be designed so as to be compatible and blend with the historic materials and design. Fenestration should generally follow the established rhythm and alignment of the historic building to achieve cohesion in the organization of openings.

Challenges in Obtaining Approval
With certain developments, building height and visibility make rooftop construction a no-go, but an owner may still want to have a usable outdoor rooftop. This proved to be the case for the Ira F. Powers Warehouse and Factory in Portland, Ore., which recently underwent a $19.7 million renovation by Beam Development. The 1925 warehouse was designed by Claussen & Claussen and is prominently located along the Willamette River at the East Burnside bridgehead. The building is on a steep slope; the result is a front elevation that reads as only three stories, whereas the rear elevation, which is visible from prominent public right-of-ways, is a full five stories. The developer initially conceived a rooftop addition, but given the three-story height of the main elevation and the prominent sightlines, it was determined that a rooftop addition would jeopardize the HTCs.

Seeking to take advantage of the skyline views, the developer proposed a rooftop deck as an alternative. The outdoor space was designed for use by both the top-floor office tenant and the ground-floor event space. Keeping this in mind, the design needed to provide for required egress while minimizing visible rooftop construction. Ultimately, two small penthouses were constructed, one for an elevator and one for an egress stair, as well as an inverted stair from the fourth floor. When designing the stair, the project design had to take into consideration materials and a drainage solution suitable for the Pacific Northwest’s damp climate. The minimalist design of a wooden stair and metal railing, surrounded by windows, fits in with the sleek finishes found throughout the building and also creates a natural light source for the full floor office tenant. The project received final Part 3 certification in February.

Creative Solutions
Another example of a project that creatively addressed the owner’s desire for a rooftop amenity, while meeting the requirements of various regulatory agencies, was the Philadelphia Hotel Monaco.

Constructed in 1907, the 11-story Neo-Classical style building was converted by Kimpton Hotels + Restaurants LLC from a vacant office building into an upscale boutique hotel. Bordering Independence Mall and sited diagonally across from Independence Hall, the rehabilitation of the building fell under the review jurisdiction of a number of regulatory agencies in addition to the HTC review. Kimpton’s proposal to add a partially enclosed rooftop bar was scrutinized by various regulatory agencies to ensure that the new construction would not be readily visible from the adjacent nationally significant open space or from the steps of Independence Hall.

Capitalizing on the fact that the 11th-floor attic was located a half-story below the flat roof, a one-story rooftop bar enclosure was designed that was sunken to the 11th-floor level to minimize visibility. One-story pavilions that existed at building corners, with windows that afforded views of the skyline, were reconfigured for reuse into event space and seating areas. An existing high parapet that ran along the elevation fronting the Mall, and a significant setback of the new addition from the perimeter, served to limit visibility from the primary public vantage points. In the end, the sunken nature of the space provides an intimate setting with comfortable lounge furniture and a unique firewall feature.

Sightline studies were prepared with vantage points from across Independence Mall, a much greater distance than is typically required, due the significance of the Mall and the fact that it is largely comprised of open space with ample sight lines. After some back and forth, the NPS ultimately determined that the new construction would not be visible and thus the addition was approved.

Conclusion
It is often possible to achieve approval for rooftop construction on a HTC project. Consideration of the overall context is important as rooftop construction is more likely to be approved on a building that is located in a densely built urban setting where sightlines will be restricted. In general, the new construction should be simple and unobtrusive in design, to allow the addition to visually disappear. The location and scale should seek to minimize visibility from surrounding vantage points. Limiting additions to one story in height and incorporating a setback can help to reduce visibility and will likely be required. Having a creative design team is essential in working within the parameters of the HTC program while achieving the programmatic goals of the owner. Given the uniqueness of each project and the various factors that come into play in assessing the approvability of rooftop additions, early submission and resolution is critical to avoid delays in the project schedule.

John M. Tess is president and founder of Heritage Consulting Group, a national firm that assists property owners seeking local, state and federal historic tax incentives for the rehabilitation of historic properties. Since 1982 Heritage Consulting Group has represented historic projects totaling more than $3 billion in rehabilitation construction. He can be reached at 503-228-0272 or [email protected].