History and the Hill: Historic Tax Credit Impact Numbers Speak to the Continued Need for the HTC 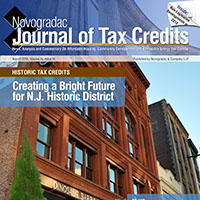 In 1981 the United States was mired in an economic recession that posed a significant challenge to the newly elected Reagan administration. Much like today, the Republican Party favored changes to the tax code to stimulate investment patterns that would promote economic growth. The President’s proposed formula included both tax cuts and “tax expenditures,” such as tax credits and accelerated depreciation, to steer capital back into the real estate market. Effective Jan. 1, 1982, Congress passed a stimulus bill that included the federal historic tax credit (HTC) which, for the past 32 years, has provided a tax credit (20 percent since 1986) for the rehabilitation of certified historic properties. The purpose of the HTC was to level the investment playing field for the rehabilitation of existing buildings, which were at a competitive disadvantage to new construction for capital investment.

The rationale for creating the federal HTC poses an interesting question for today’s Congress, which this spring will debate comprehensive tax reform for the first time since 1986. Is the HTC still needed? Is historic rehabilitation, or rehabilitation in general, still at a competitive disadvantage to new construction? As the federal government struggles to choose winners and losers in tax reform, is the HTC a tax expenditure that we can afford to eliminate or roll back?

Since the enactment of the HTC, there has been growing support in public policy circles for property rehabilitation in older communities. Smart growth advocates now argue that these buildings are part of a built environment already supported by roads, transit, educational facilities and utility grids. Their reuse reduces dependency on automobiles and fossil fuels. The National Trust for Historic Preservation has performed a peer-reviewed study, “The Greenest Building: Quantifying the Environmental Value of Building Reuse,” that shows that older commercial buildings are inherently more energy efficient and, when renovated, retain the “embodied energy” that was used to build them and reduce the use of landfills to dispose of construction waste. Since 1982, the Main Street program has proven that the authenticity of historic buildings attracts people to unique downtown housing opportunities, restaurants and entertainment and office spaces. Compact, walkable Main Street districts bring shoppers and tourists to locally owned businesses that provide freshness and vitality that the shopping mall can never match.

Nevertheless, historic rehab still faces some of the same economic challenges that led the Reagan administration to embrace the HTC. None of the above public policy justifications by themselves can drive individual historic property owners to invest their own money or borrow capital to rehabilitate a building unless there is a chance the building and its tenants will be an economic success. Hurdles to overcome include providing parking options for properties built to accommodate the horse and buggy, respecting the historic arrangement of interior spaces that may not contribute to the property’s bottom line, and foregoing in many instances external additions that may give an older building the scale to adapt to its most viable new use.

On top of the well-known physical challenges of historic rehabilitation is the reality that capital in our economy still gravitates to the tried and true: the franchise that seems to work everywhere, the ubiquitous brand that consumers always come back to and the area of town that has a track record of supporting successful businesses. Because they are unique by nature, historic properties don’t offer investors the comfort that comes with sameness and repetition. Nor do these properties typically attract the attention of developers with the deepest pockets. Most developers still prefer the predicable costs, marketability and higher returns on capital provided by new construction in automobile-friendly suburban markets with proven demand.

In fact, many historic buildings are located in disinvested and diverse parts of downtown that long ago lost the competition with suburban office parks and regional malls. Based on National Trust Community Investment Corporation research, we know that between 2001 and 2012, 77 percent of HTC transactions were in qualified low-income census tracts. It is the continuing need to “make the numbers work,” and to overcome investor preferences for familiar and proven products that drive the need to retain the HTC in the tax code.

Making the Case for the HTC on Capitol Hill
In the best of times, it’s difficult to sell culture on Capitol Hill. In hard economic times like these, it’s simply a losing strategy. Creating jobs, revitalizing local economies, putting food on the table and being careful how we spend scarce tax dollars are among the few priorities that have any support today. Fortunately, the Historic Tax Credit Coalition (HTCC) has followed this shift in Hill priorities and has, for the past four years, been working in partnership with Rutgers University’s Center for Urban Policy Research to measure the economic impact of the historic rehabilitation tax credit.

The findings of the Annual Report on the Economic Impact of the Federal Historic Tax Credit FY 2012 are useful for understanding the ripple effects of historic rehabilitation on the U.S. economy and make the case for saving a tax credit that continues to do all that it was designed to do. This year’s report was sponsored by the National Park Service, and the HTC’s economic impact measures are summarized below.

As shown to the left, the benefits of investment in HTC-related historic rehabilitation projects are extensive, increasing payrolls and production in nearly all sectors of the nation’s economy. The cumulative effects for the period of fiscal year (FY) 1978 through FY 2012 are illustrative. During that period, $3.5 billion in HTC-related rehabilitation investment created approximately 57,800 jobs and $3.4 billion in gross domestic product (GDP), nearly 30 percent of which (692,000 jobs and $34.3 billion in GDP) was in the construction sector. This is as one would expect, given the share of such projects that require the employment of building contractors. Other major beneficiaries were the service sector (418,000 jobs, $16 billion in GDP), the manufacturing sector (480,000 jobs, $31.1 billion in GDP), and the retail trade sector (345,000 jobs, $9.1 billion in GDP).

As a result of both direct and multiplier effects, and due to the interconnectedness of the national economy, sectors not immediately associated with historic rehabilitation, such as agriculture, mining, transportation and public utilities, benefit as well. David Listokin, professor and co-director of the Rutgers Center for Urban Policy Research said, “As a generator of jobs and GDP, HTC-related investment is stimulus on steroids.”

Summary of Cumulative HTC Impacts
In short, the federal HTC is a good investment for local communities, individual states and the nation. This view is supported by considering the cumulative impacts of the program to date (FY 1978 through FY 2012).

An inflation-adjusted (2012 dollars) $20.5 billion in HTCs encouraged a five times greater amount of historic rehabilitation ($106.1 billion).
This rehabilitation investment generated about 2.4 million new jobs.
The cumulative positive impacts on the national economy include $245.2 billion in output, $121.2 billion in GDP, $89.1 billion in income and $35.5 billion in taxes, including $25.9 billion in federal tax receipts.
The leverage and multiplier effects noted above support the argument that the federal HTC is a strategic investment.

The Rutgers study’s results also show that the federal cost of the HTC – a cumulative $20.5 billion in inflation-adjusted 2012 dollars for the period from FY 1978 through FY 2012 – is more than offset by the $25.9 billion in federal taxes generated over the same period