“With the reduction of the public housing subsidy over the years and the stability of the project-based rental assistance program, we felt the conversion to the RAD program was a good business decision for us,” said Douglas Dzema, executive director of the Housing Authority of the City of Perth Amboy. “The RAD program allowed us to address the backlog of capital needs that has accumulated due to insufficient funding.”

“RAD is a great program,” said Mark Gioioso, an independent consultant who helped put together the two capital stacks. “Housing authorities are very happy working with the program and feel projects are left with a better financial footing.”

The two properties had deferred maintenance before the RAD conversions, but were operating well.

“Although the properties were well maintained, there was a need for updating the major systems and dwelling units. We were able to change the face of the buildings and enhance curb appeal,” said Dzema. “Under the current public housing system we were only able to do Band-Aid maintenance.”

Image: Courtesy of Housing Authority of the City of Perth Amboy
The two scattered-site developments are Hansen RAD, which has two high-rise buildings and 147 apartments reserved for seniors, and Dunlap RAD, which consists of 30 garden-style buildings with 213 apartments for families.

Both Hansen RAD and Dunlap RAD underwent extensive renovations, with no new construction.

At Hansen RAD’s six- and 11-story buildings, Dzema said a primary focus was making the property safe and more handicap-accessible for the seniors. From there, the plumbing was upgraded, as was air conditioning and sprinkler systems, and elevators. Weatherization work to the exterior was done. The apartments received major upgrades such as new kitchens, bathrooms and new flooring and interior lighting.

Tenant relocation was necessary at one of the buildings during renovations. Residents were temporarily moved to alternative housing until their apartments were complete. Dzema said this work was done as expedient as possible to minimize inconvenience to the residents.

The apartments at Dunlap RAD also received new kitchens, bathrooms and flooring. The façades of the family apartments were also updated (including brick pointing) and weatherization work was done. In addition to the various system upgrades, Dunlap RAD also underwent site work and received security fencing around the properties.

“The residents of both developments were involved in the decision-making process during the planning stages,” said Dzema.

The renovations of Hansen RAD and Dunlap RAD were completed in December 2018. “The improvements have revitalized and refreshed the properties,” said Dzema.

While the two properties were redeveloped at the same time, they were financed separately, with Gioioso helping to structure both capital stacks.

Additional financing for Hansen RAD includes a $5.7 million sellers note and $2 million in equity from the housing authority, as well as a $1.1 million Affordable Housing Program loan from the Federal Home Loan Bank of New York.

Financing for Dunlap RAD was rounded out with an $11.3 million construction loan from the NJHMFA, which was backed by the tax-exempt bonds, a $9.5 million sellers note and $3.8 million in equity from the housing authority, as well as $9 million in bonds purchased by TD Bank and a $1.6 million Affordable Housing Program loan from the Federal Home Loan Bank of New York.

The contribution by the housing authority was from the sale of an obsolete public housing development. HUD allowed the use of these proceeds to be used in the RAD conversion.

Gioioso had advice for completing a successful RAD conversion.

“Make sure your evaluation is strong,” said Gioioso. “Getting good appraisals is very important, working off of proper evaluations of assets to maximize your tax credits. … Because these transactions don’t carry
a lot of debt.”

“The Housing Authority of the City of Perth Amboy did an excellent job preserving 360 apartments as affordable housing while also completing major renovations,” said Rich Larsen, partner in the Toms River, N.J., office of Novogradac, which performed the final cost certifications for both RAD redevelopments. “This is exactly what the RAD and LIHTC programs were designed to do.” 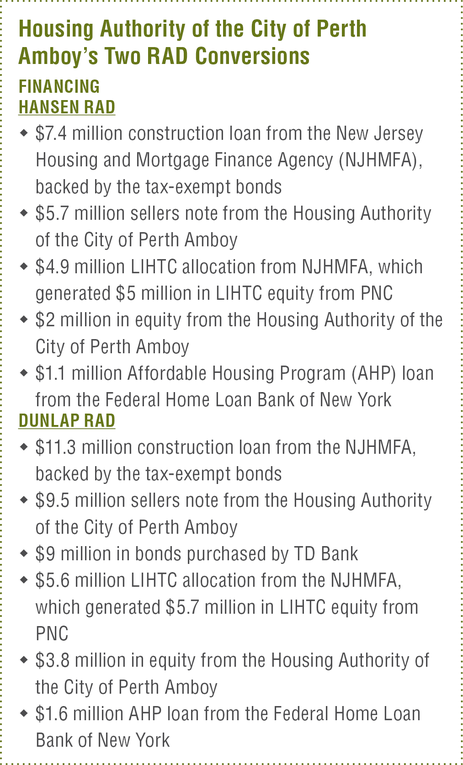