Published by Brad Stanhope on Tuesday, May 7, 2019

Tucked in the northwest corner of California, the Tolowa Dee-ni’ Nation is expanding its footprint–and a 21-home development funded with equity from low-income housing tax credits (LIHTCs) and renewable energy investment tax credits (ITCs) plays a key role. Those homes will ultimately be owned by tribal members.

“Homeownership is a big cultural aspect,” said Adam Rose, senior project coordinator at Travois, which served as consultant and architect of record for the development. “This is more than just housing for 21 families; this is about preservation of culture. The kids who move into [the homes] will likely inherit the property and preserve the culture. This is bringing Tolowa Dee-ni’ Nation members to their historic land.”

The 21 homes overlook the Pacific Ocean, adding a new element for a native nation that has more than 1,700 enrolled members, about half living within 100 miles of the tribe’s headquarters. The hope is to bring many home to Smith River, Calif., just south of the Oregon border.

“The tribe encourages homeownership for every family that wants it,” said Tim Hoone, planning director for the Tolowa Dee-ni’ Nation. “When we did a housing needs survey, we surveyed families in areas outside our immediate service area. People want to move to the reservation, but it’s hard to find a rental home or an affordable home to purchase.”

The new development, called Dat-naa-svt (The Beach), costs $12.9 million, paid for partially by the tribe and partially by Hunt Capital Partners’ investment in LIHTCs and ITCs through its multi-investor fund, Hunt Capital Partners Tax Credit Fund 31. The construction of six homes is scheduled to finish in May and June and four more in October. The first residents will move into the homes in June.

“These homes meet a real need and help build a community,” said Dirk Wallace, a partner in Novogradac’s Dover, Ohio, office. “The LIHTC and ITC programs provided financing that the Tolowa Dee-ni’ Nation was able to leverage with other scarce housing resources. Without that, these homes probably wouldn’t get built.”

Novogradac provided reports for the property’s tax credit application and consulted with Travois on accounting matters related to the partnership.

Dat-naa-svt on the Pacific Ocean

The homes will all face the Pacific Ocean.

“The ocean views are absolutely gorgeous,” said James Crowder, director of project management at Hunt Capital Partners. “The tribe is somewhat reinventing itself. They are now reclaiming land and this asset was bought and put in a trust. The tribe is very sophisticated and is in growth mode.”

The Tolowa Dee-ni’ Nation recently developed a hotel and casino, as well as a wastewater treatment plant, which will allow more housing in the future.

“They have a small housing stock and are trying to get members back to the area, back to Smith River,” Crowder said.

The Dat-naa-svt development features single-family homes with one, two, three or four bedrooms for families earning from 30 to 60 percent of the area median income.

“[The homes are] very large, which is somewhat typical for tribal property, due to the availability of land,” said Crowder. “The land is trust land and there’s a 50-year ground lease. This is 20-plus acres for 21 units.”

Hoone said the location led to some spectacular views.

“The location for the homes is a quarter mile from the Pacific Ocean,” Hoone said. “The entire subdivision was designed so that each home has a view of the ocean.”

The property will include picnic areas, a playground and community building. Landscape plantings include edible native plants (blueberry, huckleberry, fruit trees and more) and garden space. It will be finished in September 2020.

There will also be supportive services for tenants, with access to education; employment benefits, skills and improvement; and health and wellness, all provided by the Tolowa Dee-ni’ Nation’s Department of Community and Family Services.

Lauren Dahl, senior architect at Travois, said the tribe was involved in every aspect of the development, including granting approval for all items used in construction. She added that there are some surprises.

“Each unit either has a carport and garage or garage,” said Dahl. “They have a small back porch and a large front porch, so the air can run through the house. There are open floor plans with bedrooms either off to the side or on both sides of the living room, dining room and kitchens. The houses are divided into four clusters that creates a little group of homes and pathways connect to the community center and pavilion.”

After the 15-year LIHTC compliance period ends, residents will be eligible to purchase the homes.

“This is unique with the homeownership conversion and plan,” Rose said. “The tenants need a home, but they’re candidates to be homeowners. It’s not unusual for them to stay for 15 years. This is not just housing, it’s a connection of the land.”

Renewable energy is key to the properties.

“The original design and architectural work with the Tolowa Dee-ni’ Nation was to make the historic and cultural design elements and incorporate them into a new design,” Dahl said. “The original houses they had are actually very modern and they’re also perfect for solar. It’s an asymmetrical steep A-frame roof that is oriented so the front porch faces the ocean.”

Renewable energy is a key part of the property.

“We are seeing more and more of this [solar] with our Native American partners,” Rose said. “That’s an important piece. Not only is it about sustainability, but it benefits the low-income residents so much.”

“The renewable energy part is huge,” said Hoone. “The homes are designed to reduce the energy bills to zero. There is a super-efficient water heater, a high-efficiency heater and about two-thirds of the roof is covered with solar panels. The electric bill can be offset, which saves about $150–for a place where rent is $500 or $600. We’re excited about that.”

According to Dahl, there is a practical reason to be self-sufficient with energy.

“There is a real need for it,” she said. “If you’re in a fire region, you won’t have power all the time. Our rural clients lose power a lot and this allows them to be able to operate when that happens. Natural gas and propane are very expensive, so this decreases the utility bills.”

“We’ve invested in a lot of properties in Indian Country,” said Dana Mayo, executive managing director at Hunt Capital Partners. “We just closed one in Maine and this deal came to us through a longstanding relationship with Travois. We’ve been doing business with them for a long time.”

For the Tolowa Dee-ni’ Nation, this was a tactical decision.

“Our main source of financing for the tribal part is HUD dollars,” Hoone said. “The tribal investment could have built six homes, but the decision for the tribe was to [either] invest in six homes or take that and leverage the tax credit financing for more. That was a big decision–the trade-off was that the homes had to be for 60 percent AMI households [compared to 80 percent AMI homes with the existing funds].”

The need for housing in Indian Country is profound: according to a 2009 report by HUD, 68,000 new units would need to be built to eliminate overcrowding and replace inadequate units on reservations. The Native American Aid organization found in 2015 that waitlists are often three years or more for tribal housing.

Dat-naa-svt doesn’t fix that, but it provides 21 families in the Tolowa Dee-ni’ Nation with housing, homes they can purchase in 15 years. 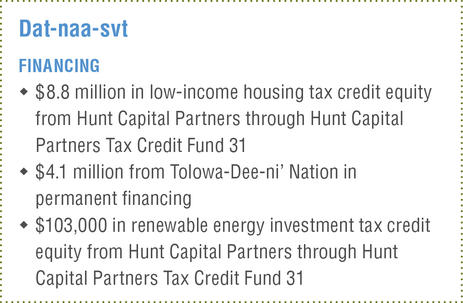