How Have Solar Development Costs Been Affected by Tariffs?

Solar development costs experienced a decline for nearly a decade as the market matured and grew at a rapid pace.

However, the rate of the decline appeared to slow down during 2017. Additionally, the recent tariff decision created a level of uncertainty in the solar market. This discussion examines the historical costs of solar development and the possible impacts of the tariffs. 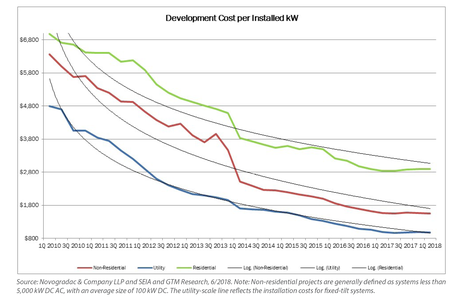 To demonstrate the general cost trends in the market, Novogradac analyzed solar development costs in both Massachusetts and North Carolina. The costs are extracted from Novogradac’s database of development costs from various installations. Generally, both states experienced a decline in costs through 2016 with small increases in 2017. It should be noted that some of the cost increase in North Carolina can be attributed to the data set having a decrease in average sizes, with the addition of a portfolio of small commercial-sized developments. Novogradac’s data is similar to the national SEIA data in that it shows a decline in costs, with recent stabilized costs or slight increases. Both the SEIA data and Novogradac data do not include cost trends since the recent tariffs on panels.

Jan. 23, the Trump administration enacted the Section 201 solar tariffs, which applies to all countries except those identified as “GSP-Eligible” developing nations, such as Brazil. The following table details the tariffs, which start at 30 percent and were effective as of Feb. 7. 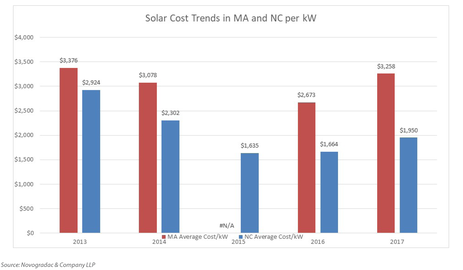 According to a Jan. 23 article published by GTM Research, “U.S. Solar Tariffs to Hike Module Costs 9-10 Cents in Year One–GTM and Deutsche Bank,” module pricing is projected to increase 9 cents to 10 cents per watt in the first year of the tariffs. However, the cost premium will decrease to approximately 7 cents per watt in year 2 and 3 to 4 cents per watt by year four. Overall, the increased module pricing is projected to impact the utility-scale sector the most. This is evident in the June 6 article published by Reuters, as the recent tariffs resulted in major developers cancelling or freezing $2.5 billion in investments and projects, particularly in the Carolinas, Texas, Colorado and Georgia.

Novogradac interviewed several market participants concerning their experiences with development costs since the tariff decision. Many developers are projecting that the tariffs will increase panel costs by approximately 10 percent. However, some developers indicated that the tariffs are just causing a short-term inconvenience. A developer in the Northeast indicated that the short-term impact on pricing was approximately 30 percent. However, as the market settles and U.S. manufacturers fill some of the demand in the market, the panel pricing will be approximately 10 percent higher than the pricing prior to tariffs. The developer noted that there is also uncertainty in total development costs of steel. Another developer active in multiple states indicated that the initial price bump in panel pricing was 25 to 30 percent. The developer also stated that they expect fluctuation in pricing to continue with recent prices starting to lower. Developers in general experienced an initial large price increase in solar panels that leveled off recently, even though uncertainty remains in the market.

The tariff decision at the beginning of 2018 created some uncertainty in terms of development costs. As indicated, solar costs have a long history of declining prices. Many developers indicated that any bump in panel pricing should be short-term in nature, with any larger increases in costs leveling off as the market settles. In addition to the solar tariffs, the pricing of steel remains an area of concern for solar developers.