The renovation of the former Buffalo Milk Company building is another example of the rebirth of Buffalo, N.Y., a city that lost half its population in the past 50 years but is experiencing growth thanks to state and federal investment and–in the case of this building–historic tax credit (HTC) and low-income housing tax credit (LIHTC) equity.

Image: Courtesy of HHL Architects
A fire in the 1980s damaged the center of the Buffalo Milk Company building, leaving some challenges in its renovation.

“There’s a lot of stuff in Buffalo to bring it back to its glory,” said Larry Regan, president of Regan Development, which is developing the property. “We saw an incredible opportunity to do this. There had been a real resurgence downstate, but Buffalo had been treading water. Then the upswing began. Now it’s full-blown–there are cranes all over the place.”

Matt Meier, partner in HHL Architects, which designed the adaptive reuse, loves the location of the property. “It’s right there, at the gateway to the community, where the U.S. and Canada meet. I think it’s going to be embraced nicely,” Meier said.

The population of Buffalo, which was 580,000 in 1950, dropped to 260,000 by 2010. A desire to repopulate the city has led to many such buildings and a massive investment from the state. The results are showing: In one high-profile example, the Buffalo Niagara Medical campus has undergone a 2-million-square-foot renovation and employment is expected to grow from 12,000 to 15,000 employees. “Buffalo is a city on the upswing, there’s a tremendous amount of activity in the medical corridor,” said Regan.

“It’s really a city that has reinvented itself over the past 10 to 20 years,” said Victor Sostar, executive vice president of First Sterling, the syndicator of the LIHTCs and HTCs, for which JPMorgan Capital was the investor. “There are a lot of subsidies involved.”

History of the Building

The Buffalo Milk Company building was erected from 1903 to 1910 and used for the pasteurization and distribution of milk. Subsequently, it became an ice cream production center, a dessert company, a printing and metal shop, a mattress company and ultimately went into receivership.

Regan said the building was ultimately used as an architectural artifact warehouse.

“I grew up here and for most of the 1970s and ’80s, it was known as the Architectural Circus building,” Meier said. “The [owner] salvaged things like fireplace mantles, sinks, windows and collected them in this building. It had been a variety of industrial uses after the milk use ceased in the 1950s or 1960s. It’s sort of an iconic building. Its construction is Medina sandstone and the typical golden iron spot Roman brick. It was a bit of an eclectic mix and it stood out among the two- and three-story buildings because it was three stories, but they were tall floors.”

Regan purchased the building last summer. “We’d done another development in town, the Packard Building, for historic reuse about seven years ago (also working with HHL Architects),” said Regan “This building was in really bad shape. It’s got great skin, but the inside is falling down. We received the [LIHTC] allocation, then we’ve done a tremendous amount of shoring up.”

There was popular support for the move.

“I think the community was very concerned and wanted to preserve the building,” Regan said. “But it was almost beyond conservation. Since it’s designated as a significant structure by the city and state, you can only knock it down if it’s falling down. People in Buffalo wanted to see the building reworked. The best part is the local people–it’s multicultural, working-class immigrants from all over the world finding a place to live.”

In addition to adding affordable housing stock and preserving a historic building, the Buffalo Milk Building apartments will add housing and likely office space for recent immigrants–which are a key component of Buffalo’s demographics.

“We are thrilled to have a developer who is working to include resettled refugees in their tenant base and who recognizes the significance of refugee communities as part of a larger community,” said Hassett. “Buffalo’s refugee communities are strong and growing and are a critical part of the regional economic and human fabric. The International Institute of Buffalo’s mission is ‘making [Western New York] a better place for, and because of, immigrants and refugees,’ so this fits perfectly.”

When completed, the apartments will feature a laundry facility, a community room with a kitchen, and the two commercial spaces for retail or office space.

Meier loves the Sandstone exterior. “It’s sort of recognizable, indigenous material that we don’t have anymore,” Meier said. “Many of the significant buildings from the late 1800s had Medina sandstone. The whole ground floor is sandstone, which is powerful, solid and presents a permanence that anchors it. It shows that it was put up in the early 1900s and is still here and will now be here for another 100 years, which is kind of cool.”

Regan said his firm is hoping to lease some ground-level space for a Burmese community center. “That’s our hope,” he said. “We’re working with the International Institute. We want people to use that as a jumping off point–to come to the neighborhood and find a community where they can start their lives anew.”

Using both LIHTCs and HTCs involves a layer of complexity, but Regan said his company’s experience in historic rehabilitation helps. And he said the fact that it helps in LIHTC allocations–HTCs reduce the funding needed and improve chances for a 9 percent allocation. However, the competing demands of the tax credit oversight organizations create complexities.

“You could see some good bones with the timber, brick and ceilings,” Meier said. “The Catch-22 is the entity that dictates approval [the New York State Housing Finance Agency] is used to a certain type of affordable housing.”

That meant some of the proposed historic adaptation didn’t work. However, there’s an upside. “In a typical affordable housing genre, you’re not going to get an apartment with 12- or 14-foot ceilings and exposed beams [such as in this property],” said Meier.

Regan said there was significant construction, which always complicates the HTC approval by the National Park Service (NPS). “We’re still working on the Part 2 [approval] bells and whistles,” Regan said. “This is a former dairy and certain rooms have to be preserved.” He cited one room with a triangular roof structure, as well as widespread changes in windows.

“We’ve been in this almost 50 years and had a lot of opportunity to adaptively reuse old buildings,” Meier said. “As a building, it was an exciting opportunity, but it posed a number of challenges. There was a fire in the 1980s that damaged the center of the building. Even as a salvage facility, it had extensive work to do. I’m thankful that Larry had the interest and gumption to do it.”

Sostar also cited the fire-damaged portion of the building. “This transformation is unique,” Sostar said. “The top two floors in the rear were demolished in a fire. In general, new construction is not a part of eligible basis for historic tax credits, but the Regans worked closely with their consultant and with the National Park Service to get approval to do reconstruction. … There was a tremendous amount of extra work on behalf of the Regans and there wasn’t much precedent.”

The building was on a 16-month timeline, but the volume of extra work on crumbling infrastructure has extended that to 18 to 20 months, meaning it is expected to open in November or December.

The financing includes $8.4 million in LIHTC equity, $2.9 million in federal HTC equity and $1.9 million in state HTC equity from JPMorgan Capital through First Sterling as the syndicator. There is also significant funding from the New York State Housing Trust Fund and from the Empire State Development Corporation.

“Regan Development is one of the top developers in the region,” said Sostar. “This is our ninth transaction with them over about four years. The quality and track record of the sponsorship was important.”

As the apartment building nears opening, the renovation of Buffalo continues.

“We’re combining our redevelopment with some other market-rate adaptive reuse apartments within two blocks,” Regan said. “There’s a sense that this neighborhood is ready to take some steps and repopulate with people living in the suburbs who want to homestead in the areas that are becoming fresh again.” 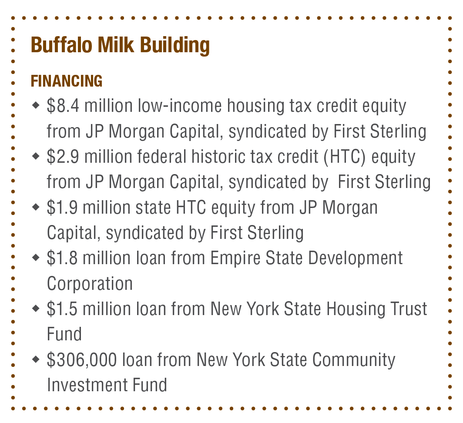 State Historic Tax Credits in the Year 2020
COVID-19 Impacts on Design and Commercial Real Estate: An Interview with Gensler and Cushman & Wakefield
Tax Implications of a Democratic Sweep in November’s Election
END_OF_DOCUMENT_TOKEN_TO_BE_REPLACED