It was a Saturday morning in early December 2017.

Historic Tax Credit Coalition leaders and their advisors were on the phone with Hill staff arguing for a better deal than the 10 percent historic tax credit (HTC) offered by Senate Finance Committee Chairman Orrin Hatch, R-Utah. The cost of retaining the 20 percent credit had been calculated at $3.7 billion over 10 years. We were challenged to find this amount of savings by the end of the day, from IRC Section 47 alone. After estimating the savings from an annual HTC cap, per-project cap and a slightly reduced credit percentage, the only fix that got us close was a five-year credit. The Coalition ran out of time trying to sell the idea of coupling the 5-year credit with elimination of the 100 percent basis adjustment.  Through interviews with HTC industry participants, this article tries to paint a picture of what this change has meant for the HTC nearly 12 months later.

Interviews with preservation consultants, investors and syndicators indicate that HTC volume in the first two quarters of 2018 was robust. The rush to close on projects that qualified for grandfathering as a one-year credit created a sharp increase in activity. This industry feedback is corroborated by Brian Goeken of the National Park Service (NPS) who reported that, during the last calendar quarter of 2017 there was a 40 percent increase in Part 1 and a 10 percent upswing in Part 2 approvals over the previous year. In mid-August 2018, Part 2 approvals were up 4 percent. Given the turmoil and uncertainty of the past 12 months, any outcome that approaches last year’s record high of $1.2 billion in credits approved would be extraordinary–an indication that demand for the HTC is resilient.

Tim Karp at JPMorgan Chase said that the firm’s appetite for the HTC is unchanged. “The HTC is a powerful tool for community development and commercial real estate,” he said. “We thought so before tax reform and we continue to believe that.” Merrill Hoopengardner of the National Trust Community Investment Corporation (NTCIC) said that NTCIC expects to do a record volume of HTC transactions in   in its fiscal year 2018.

While the four largest banks by asset size–Bank of America, Citibank, Wells Fargo and Chase–have plenty of tax liability despite the lower tax rate, U.S. Bank (fifth-largest) has shifted its HTC business model post-tax reform. Due to its reduced tax rate combined with its past high volume of LIHTC, HTC, new markets tax credit (NMTC) and solar credit investing, USB will emphasize HTC syndication over direct investments going forward. Steve Kramer and Kristen Switzer said their HTC platform will underwrite and close transactions on their books, monitor construction, then sell their interests in the partnership to a pre-identified investor before the property is placed in service. Precluded by the HTC revenue procedure, U.S. Bank has not provided investor guarantees. 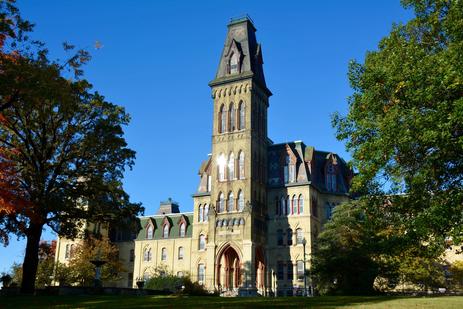 Image: Courtesy of The Alexander Company
In order to offset the reduced value of the five-year federal and state HTCs on its Soldiers Home project, Alexander Company obtained a VA Military Construction Grant and used a “hybrid” LIHTC structure that allows the use of the 9 percent and 4 percent credits on the same development.

Will There Be a Slowdown on Five-Year Credit Deals?

There is speculation among some industry professionals that developers’ intensive focus on closing grandfathered deals has weakened their pipeline of five-year credit projects. NTCIC reports that it saw a flurry of activity for grandfathered projects in the first six months of calendar 2018. Their first five-year transactions are just coming in now. Chase also indicated that the industry is seeing a pipeline increase in five-year deals during the fourth quarter.

While these comments might suggest a slowdown is coming in 2019, the recent history of the HTC has shown a consistent increase in qualified rehabilitation expenditures since the Great Recession. Time will tell whether the statistics bear out these industry concerns.

Pricing Impacts of the Five-Year HTC

While investor interest has stayed strong despite the lower corporate tax rate, the time value of money and the reduced value of associated capital losses have combined to lower pricing for the federal HTC. An analysis done by Novogradac in late December 2017 projected a new range of pricing depending on what discount rate investors apply to the five-year credit stream. At an 8 percent discount rate, pricing was expected to drop by 10 to 15 percent to a range of 77 cents to 81 cents. At a 6 percent rate, pricing was projected to drop 7 to 13 percent to a range of 78 cents to 84 cents. However, on a deal-by-deal basis, high investor competition appears to be driving prices to the upper end of the Novogradac projections. Ted Russell of Wexford Science and Technology said that one of their large five-year credit transactions with a single credit tenant attracted six bids with a range of prices from the high 80s to low 90s. NTCIC reported seeing pricing from 80 cents to 90 cents depending on deal size, quality of sponsorship, Community Reinvestment Act value and the product. The company also expects to see adjustments to investor cash requirements and partnership flip percentages as investors try to maintain higher pricing. At least two investors are offering pay in schedules that extend beyond Part 3 approval. That said, there have been only a handful of five-year projects closed. Trends are hard to document with so few data points.

Developers are the closest to the ground when it comes to pricing trends and strategies for closing financing gaps.  Two projects that could not qualify for grandfathering illustrate the continued creativity of HTC developers in the face of adversity.

Dominium has been working on its Ft. Snelling HTC/LIHTC affordable housing project in Minnesota for some time. Faced with a five-year federal and Minnesota state HTC, Dominium was able to secure $29 million in affordable housing bonds to help shore up the financing gap. The developer was also successful in advocating in the state legislature for a grandfathering of the previously one-year Minnesota credit for the Ft. Snelling transaction. Jeff Huggett plans to look for new projects that pencil at 82 cents and target deals that also provide other incentives such as the NMTC and state HTCs.

Alexander Company’s Soldiers Home veterans’ housing project in Milwaukee was dealt a blow when they were unable to obtain the Congressional approval needed to have a signed Enhanced Use Lease (EUL) with the Department of Veterans Affairs (VA) prior to the end of December 2017. EULs require multiple, time-consuming layers of approval including a Section 106 review, OMB sign-off and a vote of Congress. With both the federal and Wisconsin state credits changed to five-year vesting, Jon Beck stated that the project suddenly had a multimillion dollar financing gap. To close the gap, Alexander was able to obtain a $5 million VA Military Construction Grant. The company also successfully lobbied the Wisconsin Housing and Economic Development Agency to allow a “hybrid” LIHTC structure where they used a two-condominium structure to deploy 9 percent and 4 percent LIHTC credits on the same deal. Once Alexander maxed out on the state’s 9 percent per project credit cap, the company earned 4 percent credits on the property’s excess eligible basis.

Darin Smith, CEO of Arch Icon Development in Woodbine, Iowa, faces similar challenges with the five-year credit. Smith does market-rate and affordable housing projects in midsize cities and towns in the Midwest. He said he is filling the HTC gap by seeking out properties that can also utilize the LIHTC. In small towns, there are few local financing tools to use, so he looks to other federal credit programs to close the gap created by the five-year HTC. The most impacted part of his business is market-rate housing where twinning with other credits is not possible, and the numbers no longer work, no matter what he pays for the building.

According to state HTC syndicators, the demand for these credits has remained robust since tax reform.

Three states had statutory language requiring their credit programs to conform to the new federal credit vesting schedule. New York state advocates acted swiftly to change their state law last spring to retain a one-year credit. There is confusion in Minnesota where some attorneys are issuing opinions that state law requires Minnesota credits to follow federal vesting. The state historic preservation office reports they have rulings from the revenue department that maintain the one-year credit. Advocates are working to resolve these contradictions. In Wisconsin, proponents plan to ask the legislature in January to return to a one-year credit.

The HTTC has convinced its House and Senate champions to take a second look at eliminating the HTC’s downward basis adjustment. The bill, The Historic Tax Credit Enhancement Act, was introduced this spring in both Houses. Darin LaHood, R-Ill., is the original sponsor in the House with two original co-sponsors, Mike Kelly, R-Pa., and Earl Blumenauer, D-Ore.  Sen. Bill Cassidy, R-La., is the original sponsor in the Senate joined as of this date by four co-sponsors, Johnny Isakson, R-Ga., Ben Cardin, D-Md., Susan Collins, R-Maine, and Sherrod Brown, D-Ohio.

Industry analyses show that elimination of the basis adjustment, which would conform the HTC to the LIHTC, should increase HTC pricing substantially by lowering investors’ capital gains taxes upon exit. Washington Report panelists at the recent Novogradac HTC conference in Nashville were cautiously optimistic that any year-end, lame-duck tax bill could include this fix.

One year after tax reform, the HTC program is enjoying continued high demand from both developers and investors. NPS stats verify the incentive’s continued popularity. Concerns that lowering corporate tax rates would dampen investor appetite have not materialized. Developers are adjusting their acquisition strategies amid lower pricing projections for the federal HTC by targeting projects that fill the HTC gap with NMTCs and state HTCs and hoping for relief from upcoming opportunity zones incentive benefits. Interviews indicate that market-rate housing and small-town projects may suffer because they don’t offer as many ways to close the gap.

State Historic Tax Credits in the Year 2020
COVID-19 Impacts on Design and Commercial Real Estate: An Interview with Gensler and Cushman & Wakefield
Tax Implications of a Democratic Sweep in November’s Election
END_OF_DOCUMENT_TOKEN_TO_BE_REPLACED