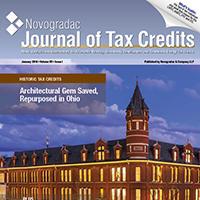 Annual changes in difficult development areas (DDAs) and qualified census tracts (QCTs) have long been part of the Low-Income Housing Tax Credit (LIHTC) program, but the Nov. 24, 2015, Federal Register notice announcement of changes for 2016 has sparked more interest than in the past.

Other aspects of the DDA and QCT designation process remain the same but have taken on an increased significance. This discussion focuses on what developers, allocating agency staff, equity providers and lenders need to know.

Internal Revenue Code (IRC) sections 42(d)(5)(B)(ii) and (iii) require the U.S. Department of Housing and Urban Development (HUD) to make these determinations based on the following parameters.

Because data on costs is not readily available (unlike incomes and poverty rates), HUD follows the IRC’s legislative history and uses a ratio of fair market rents (numerator) and the income of eligible tenants (denominator).

The areas are then ranked from the highest ratio to the lowest. Not all of the areas that would be DDAs/QCTs qualify because Section 42 limits the total to 20 percent of population. Michael Hollar, senior economist in HUD’s Office of Policy Development & Research (PD&R), says this year 146 of the 375 MSAs miss out on at least one area being so designated because of this population cap.

Section 42(d)(5)(B)(v) allows state LIHTC allocating agencies to count specific buildings as DDAs, although not if they are financed with tax-exempt bonds.

The main benefit of DDAs and QCTs is that properties in these areas may receive an increase, or boost, of up to 30 percent for the eligible basis attributed to new construction or rehabilitation. Correspondingly, the maximum possible LIHTC allocation is 30 percent larger (other than the amount for building acquisition, which is not boosted).

QCTs involve two other considerations. IRC Section 42(m)(1)(B)(ii)(III) requires qualified allocation plans (QAPs) give a preference in the competitive application process for projects in QCTs which contribute to a “concerted community revitalization plan.” The other is an allowance for what are called community service facilities. Normally space intended for use by nonresidents does not count toward eligible basis, but under Section 42(d)(4)(C) some costs of facilities designed to serve low-income individuals will be eligible if the development is in a QCT (see Revenue Ruling 2003-77 for additional requirements).

With the changes in DDA and QCT designations, there are three possible outcomes:

A description of the two major policy differences informs consideration of the first two outcomes.

The 2016 DDA and QCT designations apply to developments with:

In previous years the effective date was Jan. 1.

HUD deserves credit for adopting a creative approach to help the affordable housing community manage an unprecedented extent of year-to-year changes (described below). The additional six months to adapt and react could be very beneficial for those who plan accordingly.

The other change is in DDAs located within MSAs. These had been entire counties (or equivalents). In 2015 there were only 35 DDAs located in a handful of states. There always has been annual variation–21 counties gained or lost DDA designation from 2014 to 2015. The important difference for 2016 is in the size and number of metropolitan DDAs. (Nonmetro DDA designations will continue being made on a county basis).

In a change announced four years ago, future metro DDAs will be based on ZIP Code Tabulation Areas (ZCTAs). These are not the same as ZIP codes, especially in fast-growing areas. ZCTAs stay constant over the course of a decennial census, while ZIP codes change to reflect the United States Postal Service’s needs. Unfortunately this discrepancy creates a possible source of confusion, or even error, as HUD’s “data sets” listing shows ZIP codes. Also, some are partial ZCTAs because of not being entirely within an MSA’s boundary. Developers, agency staff and others should look to the huduser.gov map for the exact areas.

The result of this new policy is that 311 areas have been designated small area DDAs (SADDAs). These SADDAs are located in 45 states in almost all of the nation’s MSAs. According to Hollar, the following are the 20 largest areas with the largest gains of SADDAs (by percent of population)

This list includes many MSAs in California and Florida that would not have seen a DDA under the prior approach.

All across the country, development pipeline deals are in areas facing a loss of DDA/QCT status. Reasons include being:

While many of these investments will be affected by the switch to SADDAs, other changes also play a role. For example, Los Angeles has 18 fewer QCTs than in 2015.

These developments often depend on the additional LIHTCs, particularly tax-exempt bond transactions. More than a decade ago, HUD responded to this difficulty by allowing property owners to keep the boost in two circumstances.

The other circumstance is for certain multi-phase properties. The notice specifies various requirements for preserving a boost, including having identified the anticipated buildings, phasing being necessary because of LIHTC allocation limits and applying in successive years.

There are now many new areas where a property will qualify for a 30 percent increase. Developers planning properties in upcoming DDAs/QCTs do not need to be concerned about applying before June 30. The notice says a “complete application” preserves what had been in effect previously if an area is losing its status, not when gaining it. However the allocation or bond issuance and placed-in-service must take place afterward.

The following are important aspects of the notice.