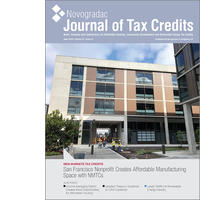 The new set-aside could have a significant impact, making more properties financially feasible and expanding household access. The winners are communities and residents where properties are built and renovated, thanks to the first new LIHTC set-aside since the tax credit was created.

The LIHTC headline in the omnibus spending bill was a temporary four-year 12.5 percent annual increase in the LIHTC volume cap. But the bill also included income averaging, as taken from the Affordable Housing Credit Improvement Act introduced in each of the past two sessions of Congress.

Income averaging is now the law.

Previously, LIHTC properties had to meet one of two tests–having 20 percent of their units targeted to households with incomes at or below 50 percent of the area median income (AMI) or at least 40 percent at or below 60 percent (the 20-50 and 40-60 tests). Rent limits have to correspond to these income limits. The income-averaging option doesn’t change those options, it adds a third.

Under the new provision, income and rent limits for at least 40 percent of the units must average 60 percent or less. The individual units’ designations must be in 10 percent increments ranging from 20 percent to 80 percent.

Details of the Provision

Income averaging is based on the limit for the unit, not the occupants. In other words, a family earning 66 percent of the AMI can live in an apartment that is designated at 70 percent or 80 percent. The figure for their unit is what is calculated in income averaging.

In simplest terms, income averaging allows a property with 25 units at 80 percent AMI, 25 units at 40 percent of the AMI and the rest at 60 percent to qualify.

For income averaging, floor space isn’t a consideration–the calculation is based on units. Under the tax rules, property owners can designate larger LIHTC units for higher-income households and still fit under the overall 60 percent limit. (Though, prior to adopting such an approach, developers should consult their state tax credit allocating agency and fair housing attorney.)

Once a minimum set-aside election is made, it’s irrevocable. As such, under federal law, the income averaging option is not available for properties for which Forms 8609, with a 20-50 or 40-60 election, have already been filed.

For instance, owners may be able to offset lower revenues from apartments set aside at 20 percent or 30 percent with units designated at 70 percent or 80 percent. The result would improve the financial feasibility for many properties, particularly those with permanent supportive housing or deeper rent reductions..

Another beneficiary will be rural areas with very low AMIs that lack the population base to fill an apartment building with a 60 percent cap. They can now qualify under income averaging, which expands the reach of the LIHTC program.

Rehabilitation of existing LIHTC properties is made easier, since units will be able to qualify for LIHTCs with residents whose income is above 60 percent (assuming they are still less than 80 percent), something not possible with only the 40-60 and 20-50 set-asides.

For instance, it’s unclear whether the unit mix can change. Does the designation made at the election stay fixed, or can the unit mix change as time passes?

There are also some questions about the next-available-unit rule. That rule allows an individual apartment to remain LIHTC-eligible if a household’s income increases beyond the applicable limit after moving in, as long as the next unit in the development is rented to a household that earns less than that limit. The same rule will apply to income-averaging properties, but what if there are two over-income LIHTC units at different designations and only one vacant unit? Which designation must be filled first?

The law allows the income averaging election to be made after the bill was enacted, March 23. It’s technically done when the owner files a Form 8609, but in reality, that set-aside is usually made when the taxpayer files the initial tax credit application containing a unit mix. That means allocating agencies will have to determine whether they will allow properties that have been awarded credits but haven’t filed Form 8609 to switch to the income averaging option.

Finally, the IRS will need to update Form 8609 to include the income averaging set-aside option.

Like most new legislation, there are some gray areas. Property owners should at least be cautious in these areas.

For instance, the legislation did not add income averaging to laws governing private activity bonds. Owners of properties using these and 4 percent LIHTC transactions will need to ensure compliance with both sets of rent and income requirements.

The question of whether income averaging applies to resyndicated properties is another issue worthy of caution. At resyndication, the owner chooses a minimum set-aside, but third-party beneficiary rights in extended-use agreements may come into play. Owners should consider the limitations of such an agreement before moving ahead with the income averaging election.

In addition, property owners must remember that other programs (the Housing Trust Fund, etc.) may have variations on income-limit qualifications, even if they sound the same. Don’t automatically assume that an extremely low-income household under the HTF program is one at 30 percent.

The LIHTC program is nearing middle age, and continues to adapt. While advocates push for the Affordable Housing Credit Improvement Act, we now have an important provision from that legislation as law. This continues a decades-long history of improving the LIHTC, whether in adjusting allocations for inflation, using the credit to encourage rebuilding storm-damaged areas or tweaking the regulations that guide the program.

Income averaging has long been a desire for affordable housing advocates and now that it’s here, there will be a learning curve. The Treasury Department will have to issue guidance, the IRS will need to revise Form 8609 and property owners and managers will have to adapt.

But the result is more affordable housing for the people who need it the most. Income averaging is a reasonable option and is worth the effort.