Sometimes, legislation has a ripple effect: Successful philosophies and elements of one legislative initiative can be emulated elsewhere.

Take the Investing in Opportunity Act (H.R. 828, S. 293), which was introduced early this year for the second consecutive session of Congress and which is inspired by the New Markets Tax Credit (NMTC) program–although its supporters specifically point out the absence of tax credits in the language of the bill.

If the Investing in Opportunity Act (IOA) becomes law, the beneficiaries would be distressed communities, many of which are also eligible for the NMTC and other tax credit programs. The legislation would create tax incentives (but not tax credits) that could complement tax credit programs such as the NMTC, the low-income housing tax credit (LIHTC) and historic tax credit (HTC). Ultimately, the goal is to encourage the investment of private capital in economically distressed areas.

The question is how much traction the legislation will get with a contentious Congress and with the shadow of tax reform looming over every move in Washington. Supporters can at least take comfort in the fact that the bill has strong bipartisan support in both houses of Congress.

It’s not surprising that the legislation’s staunchest supporters are those who understand and endorse other key tax incentive programs, including original House sponsor Pat Tiberi, R-Ohio, and Senate sponsor Tim Scott, R-S.C. That many cosponsors are members of the House Ways & Means Committee and the Senate Finance Committee is also a good sign.

Details of the Act

The Investing in Opportunity Act would amend the Internal Revenue Code (IRC) to authorize the designation of Opportunity Zones in low-income communities and allow the deferral of otherwise taxable gains if such gains are reinvested in designated zones.

The legislation allows governors to submit nominations for up to 25 percent of the NMTC-qualified census tracts in their states as Opportunity Zones for certification and designation by the Treasury Department. Those areas must already be the focus of initiatives to attract investment and startup activity; have demonstrated success in such things Promise Zones, Empowerment Zones, Renewal Zones and the NMTC; and have recently experienced significant layoffs due to business closures or relocations.

The three core elements of the legislation:

Again, the tax incentives in question would not be tax credits–in fact, Tiberi’s 2016 release when the legislation was first introduced says, “no tax credits or public sector financing are involved.” In structure, Investing in Opportunity Act regulations are most similar to IRC Section 1031 “like-kind” exchange rules–deferring gains realized on other investments if a taxpayer agrees to reinvest them into Opportunity Zones.

The legislative intention is to have targeted, geographically contiguous and relatively limited zones in each state where this incentive can deliver capital investment.

Those goals are remarkably similar to the objectives of the NMTC program. Two key differences would be the scale of the overall capital that could be brought to bear for distressed areas and the depth of the subsidy for such capital. The IOA could incentivize much more private capital than the NMTC provides, but at a much shallower subsidy.
For those in the tax credit world, the benefits provided by the bill could be complementary to the NMTC, LIHTC, HTC and other community development programs. In fact, when he introduced the bill last year, Tiberi pledged to work to improve and expand the NMTC and LIHTC as part of efforts to further incentivize private capital investment in distressed neighborhoods.

Tiberi was joined by 31 original cosponsors of H.R. 828. At press time, there were 59 cosponsors to the legislation, 35 Republicans and 24 Democrats. Included among the House cosponsors were 16 members (10 Republicans and 6 Democrats) of the 39-member House Ways and Means Committee, which plays a prominent role in tax policy. That list includes Tiberi and Ranking Member Richard Neal, D-Mass.

Meanwhile, Scott introduced an identical bill in the Senate with 11 original cosponsors. At press time, there were 13 cosponsors (6 Republicans and 7 Democrats), with three of them–including Scott and Sens. Michael Bennet, D-Col., and Mark Warner, D-Va.–members of the Senate Finance Committee.

Clearly both bills have plenty of firepower. But both still face hurdles. 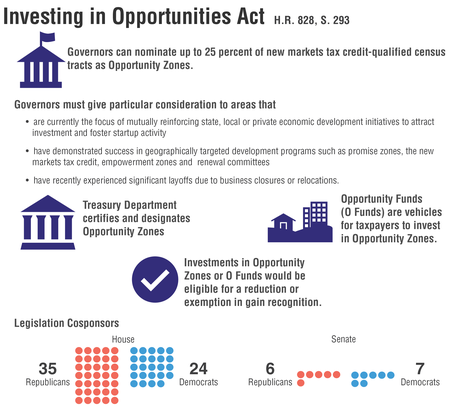 Private-public partnerships are alive, well and work. We’ve seen the benefit of that approach through the HTC, LIHTC and NMTC programs. That the Investing in Opportunity Act authors took portions of the NMTC program to draft their legislation shows the influence of the program.
The “poverty, opportunity, upward mobility” policy supported by both House Speaker Paul Ryan, R-Wis., (who included that phrase as the secondary headline on the House Republican tax plan last summer) and Scott is also a key inspiration for the IOA. White House Domestic Policy Advisor Ja’Ron Smith, a former staffer for Sen. Scott, is familiar with the bill and supportive of its goal to increase investment in distressed areas.

As with any tax-related legislation during the 115th Congress, the fate of Investing in Opportunity Act is may be tied to the larger issue of tax reform. But, whether the bill can advance individually, as part of a community renewal legislative package, or as part of a larger bill in comprehensive tax reform, the Investing in Opportunity Act is a sign that Congress recognizes the efficiency of using the tax code to encourage private investment to attack poverty and blight.