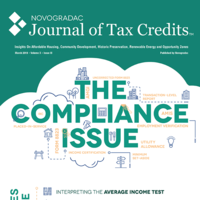 As part of the Consolidated Appropriations Act of 2018, Congress revised Internal Revenue Code (IRC) Section 42 to include a new option for the Minimum Set-Aside (MSA) called the “Average Income Test.” The purpose of this article is to:

This article will not use the phrase “income averaging” to describe the new MSA option. Not only is the commonly-used shorthand technically inaccurate, it actually refers to an entirely distinct tax concept (applied in a different context). The IRS will always use the title “Average Income Test.”

Note that while the average income election does not require a distribution of income limits among different size low-income units, most (if not all) allocating agencies have policies mandating a pro-rata distribution.

How is the AIT MSA applied? An example is helpful.

To qualify as a low-income unit under  Section 42(i)(3), (1) a unit must be occupied by an income-qualified household, (2) the rent must be restricted and (3) the unit must be suitable for occupancy. For the AIT, an owner should use the unit’s designated income limit to determine whether a household is income-qualified and compute the maximum allowable rent.  In this example, all 10 units are qualified low-income units.

At least 40 percent of the units are qualified low-income units and the average designated AMGI for all the units is shown as follows.

Therefore, the owner has satisfied  both requirements under Section 42(g)(1)(C).

The challenge is how to account for noncompliant low-income units. What happens if two of the 50 percent units are out of compliance at the end of the taxable year? There are eight qualifying low-income units; i.e., 80 percent. The owner has satisfied the first requirement of the AIT  because at least 40 percent of the units are qualified low-income.

However, the average of the qualifying low-income units’ designated income limits is now 63 percent, computed as follows:

Has the owner satisfied the Average Test? A literal reading and careful analysis of the IRC is needed to answer this question.

Section 42(g)(1)(C)(ii)(I) requires the taxpayer to “designate the imputed limitation of each unit taken into account.” The following paragraph, Section 42(g)(1)(C)(ii)(II), requires only that “the average of the income limitations designated under (I) shall not exceed 60 percent of area median gross income.”Paragraph II is specific to each unit in paragraph I. Noncompliant low-income units are  addressed when determining whether at least 40 percent of the units are qualified low-income units. There is no requirement to recompute the average income limit to account for noncompliant units a second time when determining whether the Average Test is satisfied. As long as the owner has designated income limits for the units and the average of those designations is 60 percent or less, the Average Test is met.

In this case, the Average Test is computed based on the designation of all 10 units, as

Therefore, the owner has satisfied both requirements for the AIT MSA election: at least four of the 10 units are qualified low-income units and the average of the income designations of all the low-income units  is 60 percent. The owner, however, would not be entitled to credits for the two noncompliant units.

Congress also revised the Next Available Unit Rule to account for the AIT. Generally, this rule requires an owner to rent the next available unit (of comparable or smaller size) to an income-qualified household if the income of the occupants of a low-income unit increases above 140 percent of the applicable income limit.

If an owner elects the AIT, the rules are adapted to account for the designated income limits associated with the individual low-income units.

First, a low-income unit will be considered over-income if the household’s income is:

Second, an over-income unit ceases to be a qualified low-income unit if any unit in the building of a comparable or smaller unit is occupied by a new household whose income exceeds the designated income limit of that unit (based on the designated income limit prior to becoming vacant). If the unit was not previously occupied by a low-income household (a market-rate unit), then the owner designates the income limit such that the project continues to meet the Average Test.

If a market-rate unit is first rented to a household with income less than 30 percent of AMGI, there will be nine units with income designations. The Average Test is

If a market-rate unit is first rented to a household with income less than 70 percent of AMGI, there will again be nine units with income designations. The Average Test is

As suggested above, combining the AIT MSA and market-rate units creates additional challenges. The level of compliance complexity is arguably unprecedented in the LIHTC field. Some agencies have even precluded owners from incorporating both.

Part 2 of this article will appear in the April issue of the Novogradac Journal of Tax Credits and will cover questions about the AIT.

Grace Robertson served as the IRS’ program analyst for the Low-Income Housing Credit Program from 1999 to 2014. She is the primary author of the Guide for Completing Form 8823, IRC Section 42 Audit Technique Guide, and the LIHC newsletters. She earned an accounting degree from the University of Utah (1984) and a post-graduate degree, Organizational Leadership and Innovation, from Marymount University in Virginia.

Mark Shelburne directs the Office of Housing Finance for the Georgia Departments of Community Affairs. Previously, he was a senior manager for Novogradac Consulting, where he contributed to authoring an early draft of the average income test. He served as counsel and policy coordinator for the North Carolina Housing Finance Agency’s rental programs for 13 years. He has degrees in law, planning, and public policy from UNC Chapel Hill.