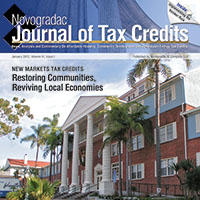 Background
The American Jobs Creation Act of 2004 amended the New Markets Tax Credit (NMTC) program under Section 45D(e) of the Internal Revenue Code (IRC) to expand the definition of low-income communities (LICs) beyond the geographic definition, to include targeted populations. Targeted populations treated as LICs means individuals, or an identifiable group of individuals including an Indian tribe, who are low-income persons (defined below) or lack adequate access to loans or equity investments.

Definition of QALICB Serving Targeted Populations
A business will be treated as a QALICB for low-income targeted populations if for each tax year one of the following three tests is satisfied:

The business must also satisfy the QALICB requirements with respect to engaging in the “active conduct” of a “qualified business,” and the limitations on the ownership of “nonqualified financial property” and “collectibles.”

Comments Requested
The final regulations include a request for comments to define additional targeted populations, including identifying individuals or groups who lack adequate access to loans or equity investments.

Enhancing, Expanding Tax Incentives is Key Part of Funding Infrastructure
QLICI of the Year Awards Honor a Variety of Developments
NMTC Participants Expect More Investors to Return Ahead of $5 Billion Allocation Round
END_OF_DOCUMENT_TOKEN_TO_BE_REPLACED