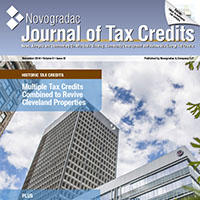 On Sept. 18, the Internal Revenue Service (IRS) released a final draft of the revised audit technique guide (ATG) for the Low-Income Housing Tax Credit (LIHTC) program. A draft ATG was released for public comment Dec. 19, 2013. The ATG was originally created to provide guidance for IRS examiners to audit owners of LIHTC properties, and the revised draft represents the first substantial update to the ATG since 1999.

The final ATG was updated to reflect the feedback the IRS received. Several of the changes that were recommended by the LIHTC Working Group were incorporated into the finalized ATG. In total, more than 100 changes were made. The more substantial revisions are summarized below. It is important to note that although the finalized ATG represents a collection of technical citations, it cannot be relied upon as authoritative literature for sustaining a technical position.

Chapter 8, Eligible Basis–Includable Costs
The definition of “residential rental property” on Page 8-1 has been expanded to reference IRS Notice 88-91, which explains that a townhouse can be a “qualified low-income building” along with apartment buildings, single-family dwellings, row-houses, duplexes and condominiums. This additional discussion now adds clarity as to what types of structures can be considered to be residential rental property.

A new section titled “Units Occupied by On-Site Managers, Maintenance Personnel, and Security Guards” was added on Page 12-9. This additional section clarifies that facilities functionally related and subordinate to residential units (such as units for resident managers or maintenance personnel) are considered residential rental property and can therefore be included in eligible basis for the purposes of the LIHTC. It further clarifies that these units are excluded from both the numerator and denominator for the purposes of determining a building’s applicable fraction. Audit techniques for this issue are outlined on Page 12-14 to assist examiners in determining if such a unit should be treated as a facility reasonably required for the project and not treated as a residential unit.

Another new section titled “Emergency Housing Relief” was added to this chapter on Page 12-9, which references IRS Revenue Procedures 2007-54 and 2014-49. This additional section discusses a LIHTC project’s ability to provide emergency housing for displaced persons, as well as relief that can be provided to a LIHTC property located in an area declared a major disaster area by the president under the Stafford Act. The “Casualty Losses in Federally Declared Disaster Areas” section of the ATG was expanded to include a reference to the newly released IRS Rev. Proc. 2014-49. Rev. Proc. 2014-49 applies to LIHTC properties in an area declared a major disaster area on or after Aug. 21, 2014. The key distinctions between this Rev. Proc. 2014-49 and Rev. Proc. 2007-54 are a shortening of the reasonable restoration period for recapture relief for damaged buildings, an extension of the period during which an agency may allow an owner within its jurisdiction to provide emergency housing to displaced individuals from other jurisdictions, the elimination of the need for income self-certification for eligibility, and more extensive guidance regarding the consequences of renting to temporarily displaced individuals.

Examples #4 and #5 on Pages 12-44 and 12-45, respectively, were expanded to demonstrate the computation of the applicable fraction for the first year of the credit period under IRC Section 42(f)(2)(A) using the lesser of the unit fraction or the floor space fraction methods as required by IRC Section 42(c)(1)(B). This addition to the ATG makes it clear that the first-year applicable fraction is based on qualified occupancy at the close of each month, and that the calculation for the year should be the the lesser of the sum of the monthly unit fractions or the sum of the monthly floor space fractions for the entire first year.

A new section titled “Acquiring Occupied Building: Tenant Relocation Costs” has been added on Page C-10. This addition now includes a discussion on the treatment of costs incurred to permanently relocate nonqualifying tenants and costs incurred to temporarily relocate qualifying tenants during rehabilitation. The ATG states that the relocation costs are deducted under IRC Section 162. The LIHTC Working Group will request clarification from the IRS regarding the treatment of temporary relocation costs, as the treatment described in the ATG is controversial among LIHTC industry participants.

The section of the ATG titled “Real Estate Taxes” on Page C-10 has been expanded to include taxes incurred during the pre-production period. This addition clarifies that real estate taxes incurred when real property is acquired with the intent to develop are capitalized under IRC Section 263A, even if no positive steps to begin developing the property have occurred.

IRC Section 266 is addressed in a new section titled “Carrying Charges Other Than Interest” on Page C-11 of the ATG. This new section explains the capitalization of otherwise deductible carrying charges paid or incurred with respect to improved but unproductive real property allowed under IRC Section 266. Most significantly, the ATG states that carrying charges (other than interest) that are attributable to vacant units that have been rehabilitated for which the production period of IRC Section 263A(f) has ended, that are available for rent but not yet been rented out, and are located in a low-income building that has been placed in service can be capitalized to the building under IRC Section 263A as post-production costs.

The above changes represent only the more significant updates that the IRS made to the ATG. The revised ATG, as well as the IRS’ summary that was published in IRS LIHC Newsletter #56, can be found online at www.taxcredithousing.com.

If you are an investor, developer, syndicator or LIHTC industry professional and would like to be part of our group and get the inside track on issues affecting the LIHTC program, or you have technical program issues that need resolved, join the LIHTC Working Group and add your issues to the agenda. For more information about becoming a member, email [email protected].

May 11, 2021: State of HTC Market, Including Equity Pricing, Regulation and Legislation
Posted on May 11, 2021
May 4, 2021: What CDEs and Qualified Businesses Should Be Doing Now to Prepare for the Next NMTC Application Round
Posted on May 4, 2021
April 27, 2021: Maximizing the Benefit of State and Local Tax Incentives and Exclusions for Renewable Energy Properties
Posted on April 27, 2021
END_OF_DOCUMENT_TOKEN_TO_BE_REPLACED