A Look at the LIHTC: Past Pricing Trends, the Current Market and Future Concerns 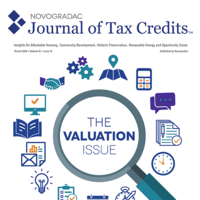 Past performance is no guarantee of future results. However, lessons can still be learned by studying history.

With that in mind, low-income housing tax credit (LIHTC) experts reflect on past LIHTC pricing trends while thinking about future hurdles such as potential Community Reinvestment Act (CRA) reform.

The LIHTC incentive was created by the Tax Reform Act of 1986.

David Salzman, president of Richman Real Estate Investments Inc., said pricing for tax credits during the program’s inception was in the high 30 cents per credit to the low 40 cents per credit range for 9 percent LIHTCs. Richman raised $14 billion in tax credit equity for almost 2,000 developments located throughout the United States.

By 1993-1994, Salzman said tax credit pricing ranged from the high 40s to low 50s, with yields between 13 and 14 percent. “Pricing crept up as corporate investors came into the fray,” said Salzman. At this time, Salzman said the market was controlled by a handful of syndicators and direct investors.

Then, the Great Recession shook the LIHTC market.

“I remember watching CNBC showing a graphic of major players in subprime lending that were a who’s who of tax credit investors,” said Salzman. “I told my colleagues, ‘hold on to your hats. An anvil is about to drop on the tax credit business.’ And it did, quickly. Investor demand evaporated.”

Vihar Sheth, senior vice president, director of business development at U.S. Bancorp Community Development Corporation (USBCDC), said the industry experienced, “a 30-cent drop [in LIHTC pricing], if people were even available to pay it.” U.S. Bank has provided $11.3 billion in LIHTC equity and lent $3.4 billion to help finance the development of 66,500 units of affordable housing.

To attract capital, Salzman said yields had to rise to the 1993 levels. “Funds had 13 to 14 percent yields in 2007 and the industry attracted new investors, mostly insurance companies,” said Salzman.

However, Salzman said the high yields didn’t last long as investors entered back into the market.

One year later, Salzman reported seeing 11 percent yields, which then kept going down.

“I think it caught the market somewhat off-guard. After the election in 2016, it appeared that tax reform was possible, so investors reduced pricing to mitigate the potential loss of benefits arising from lower tax rates,” said Sam Shupe, senior vice president, director of feasibility at Raymond James Tax Credit Funds Inc. “The industry generally settled on a 25 percent tax rate, which caused credit prices to drop from around $1 (and even higher in certain high-demand markets) to the low- to mid-90 cent range. This required a reworking of the capital structure on all developments, and some were not financially viable under the new credit pricing and did not move forward.” Raymond James Tax Credit Funds has sponsored more than 150 LIHTC funds since 1987, raising more than $10 billion of equity to invest in more than 2,200 properties in 47 states.

“Investors were surprised with the outcome of the election,” said Sheth. “Part of that was the realization that tax reform was looming.”

Sheth saw the market adjust and use similar corporate tax rates (between 21 and 28 percent) after the 2016 presidential election in anticipation of potential tax reform. “25 percent [corporate tax rate], that was the number that most participants rallied around,” said Sheth.

Once the industry got comfortable with the assumed 25 percent tax rate, the Tax Cuts and Jobs Act of 2017 was passed in December 2017.

“At the end of 2017, the Tax Cuts and Jobs Act of 2017 was passed, which reduced the top corporate rate to 21 percent,” said Shupe. “As this rate was lower than the 25 percent tax rate assumed by the industry, we saw a slight reduction in credit prices, but the reduction was not as significant as it had been after the election.”

With tax reform more than two years in the rearview mirror, Salzman sees pricing in CRA areas range from the high 90s to about $1 per credit, with yields from 3 to 4 percent. In non-CRA markets, Salzman said pricing differs from one deal to the next, with economic investors expecting yields between 5 and 6 percent.

Shupe sees similar pricing trends. He said LIHTCs in competitive CRA markets range from 95 cents to 99 cents. In areas where there is not strong CRA demand, he sees pricing in the 87 to 92 cent range.

“The primary driver for LIHTC pricing is investor demand for CRA purposes,” said Shupe. “Markets where there is significant investor need from commercial banks who are complying with Community Reinvestment Act requirements are seeing higher prices than markets where there is less CRA demand.”

Sheth sees 9 percent LIHTCs go for the low- to mid-90s in CRA markets, with yields at about 4 to 5 percent. Non-CRA investments are in the high-80s to low-90s, with yields from 5 percent to over 6 percent.

“The band of pricing has narrowed,” said Sheth. “Pre-tax reform, CRA markets were getting $1.05 to $1.10 per credit and the Midwest and Southeast saw tax credit pricing in the high 80s to low 90s. Now, that vast majority of deals get 90 cents to $1 per credit.”

“You can’t make a blanket judgment on where pricing will go with CRA reform,” said Salzman. “It’s too complex with too many facets.”

Salzman wonders, “Where will states allocate credits with CRA reform?” He said this could play a factor on whether pricing in CRA and non-CRA markets goes up or down.

Shupe agrees that CRA reform is the industry’s biggest hurdle on the horizon.

“A big issue for our industry may be CRA reform, which may reduce the amount a commercial bank needs to reinvest in the communities they serve,” said Shupe. “Additionally, CRA reform may provide other alternative investments outside of LIHTC for banks looking to meet their CRA goals. Since CRA is driving more competitive pricing, it is imperative that incentives remain for commercial banks to be active investors in the LIHTC market.”

Shupe expects interest rates to rise in the future, which will affect LIHTC pricing.

“Longer term, at some point interest rates will rise and LIHTC pricing will need to decrease in order for LIHTC investments to remain competitive with other investments,” said Shupe.

“Increasing interest rates would put pressure on the industry,” said Sheth. “It would make budgets tighter.”