The Making of Main Street: Looking Back on the Success of NTCIC’s Irvin Henderson Main Street Revitalization Fund 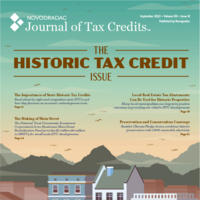 Using tax credit equity to finance Main Street-scale revitalization projects with less than $10 million in development costs presents a unique set of challenges and opportunities. Yet the financial and community benefits generated by these projects provide vital goods and services and support small businesses within our country’s most historically underinvested communities.

Leveraging our network of experienced tax credit professionals and experience as pioneers of twinning HTCs and NMTCs, National Trust Community Investment Corporation (NTCIC) created the Irvin Henderson Main Street Revitalization Fund (MSRF) to support this class of projects. Named for NTCIC’s chair emeritus and passionate champion of community development and preservation, this fund provided $2 million to $4 million in innovative NMTCs for smaller-scale historic rehabilitation projects using a portion of three rounds of NMTC allocation. NTCIC’s structure maximizes the benefits of both credits within the transaction and helps lower the transaction costs by providing the NMTC financing in a structure that has no origination or sponsor fees. Our team’s seasoned tax credit experts also understand the needs of small deal financing and provide guidance and support throughout the closing process.

The recent successful financing of the West Side Bazaar project in Buffalo, New York, represents the 11th and final project supported through the MSRF. This project will revitalize a historic warehouse to create a new home for a highly sought food and retail business incubator that provides technical assistance, financial resources and community gathering space for entrepreneurs looking to create or scale up their small businesses. The incubator specializes in supporting women, foreign-born entrepreneurs and people of color.

The Beginning of the Revitalization Fund

The MSRF was established in 2017 to support the $5.7 million revitalization of the Owosso Armory building in Owosso, Michigan. The Shiawassee Chamber of Commerce was working to adaptively reuse the vacant Michigan National Guard building into a multitenant office building, anchored by the Chamber’s headquarters and the Shiawassee Economic Development Partnership. Together, their plan was to provide flexible office space in the remainder of the building for small, local businesses and entrepreneurs.

While the sponsor team had experience operating and providing small business support programming, they were undertaking their first significant real estate project to expand this suite of services. They had assembled a range of public and private capital sources to complete the development and had sought HTC equity, but due to the relatively small size of qualified rehabilitation expenditures (QREs), the property was precluded from favorable HTC market pricing and faced additional financing gaps.

Our partners at Main Street America (like NTCIC, an affiliate of the National Trust for Historic Preservation) connected us with the project sponsors and we were able to provide the project with more favorable HTC pricing by twinning it with NMTC equity to fill the financing gap. NTCIC worked as a close partner and resource for the sponsor team to help them understand the NMTC incentive, explain twinned structures and provide answers to development questions and concerns. Our investment and closing partners capped certain fees and eased aspects of underwriting to further enhance the tax credit equity the project received and ultimately helped the project get across the finish line.

Since this initial project, NTCIC has financed 10 additional small deals, representing more than $100 million in total development costs. We provided $22 million in NMTC allocation across three rounds and helped these projects leverage $30 million in federal and state HTCs.

Looking back on the many projects we supported through the MSRF, our team holds different projects near and dear to their hearts for a variety of reasons.

“One advantage of having a national footprint and working on multiple transactions over several rounds is that we were able to touch a number of high-impact projects that meet community needs in myriad ways,” said NTCIC President Merrill Hoopengardner. “One favorite that comes to mind and is up and running is the Academy Lofts project in Atlanta, Georgia. This project restored a long-vacant elementary school and turned it into a place where local African American artists can live, create, and share their talents with the community, while also providing educational opportunities for future artists.”

The project is anchored by The Creatives Project, which connects emerging artists with affordable housing within the project and nearby spaces. These artists then participate in art education programming for children in the surrounding communities.

Part of what made this development successful, given its size, is that in addition to our role of community development entity (CDE), our HTC investment partner was also the NMTC investor, as well as the construction/mini-permanent and the HTC bridge lender. This simplified the already-complex structure, cut down on closing fees and provided a more streamlined process which resulted in more equity for the project.

Meanwhile, our investment in the Robbins Dancing project, which opened its doors earlier this year, was particularly special to Baltimore-based Acquisitions Manager Amanda Bloomberg.

“How many projects do you know that were once a car dealership, turned nightclub, turned nonprofit office space?” she said with a laugh. “But seriously, besides being in my backyard, I had worked with the developer for years to make this project a reality and I’m so pleased for their continued success and support of this main street community.”

Indeed, the Robbins Dancing project represented the continued growth and revitalization of the Station North Arts and Entertainment District in Baltimore. The historic car dealership building eventually became the iconic Odell’s nightclub, the birthplace of Baltimore Club music. It is now the headquarters of Arts for Learning Maryland and Code in the Schools, two nonprofit organizations dedicated to enriching the lives of Baltimore City youth through arts and computer science education.

“Financing smaller transactions is challenging on a number of dimensions,” said Hoopengardner. “The most difficult part is that certain costs are fixed regardless of size, so budget gaps can become quite pronounced even if the total development costs are one-tenth of some of our larger projects, but the fixed expenses are a larger fraction of total costs than in a larger deal.”

These fixed transaction costs, such as ongoing tax/audits, construction monitoring and reasonableness reports, may disproportionately reduce the net benefit of tax credits for smaller transactions.

“[An additional] $100,000 means a lot more to a $5 million project than a $50 million project,” said Bloomberg. “We take being a partner in these deals very seriously and go above and beyond to be a resource for the project team and to make the closing process as seamless as we can. Our interests are always in-line and we want to the project to be successful. In addition, we do a significant amount of pre-underwriting before we issue a commitment to prepare the project for closing before incurring certain soft costs.”

To help offset some of these cost incursions, NTCIC works with a network of investment partners for MSRF-financed projects, which have all agreed to cap certain fees. NTCIC also developed a webinar series for developers who are new to tax credits, especially twinned projects using both HTC and NMTC, so we could help projects improve their capacity and readiness before engaging paid professionals.

It should go without saying that having a team of knowledgeable, flexible and supportive partners is critical to project success.

Smaller-scale HTC developments are a significant portion of the overall HTC market. According to the National Park Service’s FY2021 Annual Report for Federal Incentives for Rehabilitating Historic Buildings, 72% of all historic projects in 2021 were $5 million in QREs or under, with an overall industry average project size of $6.9 million.

Tax reform in 2017, fortunately, preserved the HTC in the tax code but modified it so it is now earned over a five-year period. As the last of the “grandfathered” HTC transactions change from single-year credits to five-year credits, there are even fewer HTC investors considering smaller historic rehabilitation projects, so NTCIC is evaluating how better to serve this part of the market.

The use of state credits remains a strong tool for supporting smaller-scale historic preservation initiatives. Currently, 39 states have a state HTC, many of which include provisions that support and favor smaller-scale project usage. Some states allocate a portion of the available credits to particular areas, such as rural communities, while other states with smaller programs feature lower per-project caps to create an environment where smaller projects aren’t locked out of the program by large-scale developments.

Additionally, more than a dozen of these states allow their credit to be transferred through a certificate or offer some form of refundability. This process bypasses much of the time, complexity and costs incurred through syndication with larger investors, directing more equity and benefit directly to the project. Credits transferred through a certificate at the state level can also drive the use of both federal and state HTCs for smaller projects, despite the federal credit’s partnership restrictions.

NTCIC is actively working to make modifications to the federal HTC as an advocate for the Historic Tax Credit Growth and Opportunity Act (HTC-GO Act). The House version of HTC-GO Act includes a provision that would allow smaller HTCs to be transferred like certificated state credits. Industry advocates are hopeful that with recent changes in renewable energy credits to add a transferability concept that this concept might make its way to the HTC in a future legislative vehicle.

In addition to making the credit easier to transfer, the HTC-GO Act would permanently increase the federal HTC to 30% for projects of $2.5 million or less in QREs, creating an immediate impact for smaller projects. The bill would also eliminate the basis adjustment rule, which requires a property owner to reduce their building’s basis by the amount of the credit which would increase the value of the credit and make it easier to twin with the low-income housing tax credit.

The HTC-GO Act would also reduce the substantial rehabilitation threshold for all projects from 100% to 50% of a building’s basis. Reducing this eligibility threshold will make more buildings eligible for rehabilitation before they have deteriorated too significantly. This change will also allow historic building owners to more easily adapt projects to new uses in a changing economic landscape.

NTCIC created the MSRF as a standalone fund to support Main Street-oriented revitalization and smaller-scale developments as part of our commitment to the innovative utilization of qualified low-income community investments (QLICI). While we met and exceeded our goals with this fund, we recognize that projects of this size are often most in need of a range of customizable and flexible financing products. We also found that many of the projects funded through the MSRF could have used additional gap financing than the “innovative QLICI” use permitted. As our current fund sunsets, we are working to more organically fold Main Street-scale developments into our overall financing strategy. By doing so, we will be able to make more intentional choices regarding investment levels for projects of this size and will be able to provide more (or less) allocation to projects that may or may not have the QREs to see the equity benefit to tax credit financing.

Investing in Main Street communities has been part of NTCIC’s core mission since we were founded in 2000 and we are excited and hopeful about how we will support these revitalization opportunities in the future.

GAAP Working Group Submits Comments on FASB Exposure Draft to Expand the Proportional Amortization Method to All Tax Credits
Thursday, October 6, 2022
NPS Report: HTC Contributed $8 Billion in Investments in 2021, the Most in Any Given Year in the History of the Incentive
Tuesday, October 4, 2022
What Developers Need to Know about the Substantial Rehabilitation Test for Historic Tax Credits
Friday, July 1, 2022
END_OF_DOCUMENT_TOKEN_TO_BE_REPLACED