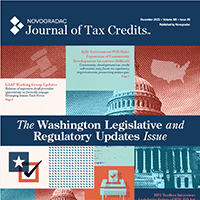 An anticipated “red wave” November election never arrived, but the result of the midterm voting–narrow Democratic control of the Senate and narrow Republican control of the House of Representatives for the next two years–still means a divided government.

That outcome may lead community development tax incentive advocates to increase their focus on regulatory improvements and preserving the status quo, with a renewed focus on the 2024 election and the session of Congress that begins in 2025.

The fact that Democrats control the Senate and White House while Republicans control the House of Representatives makes it unlikely that we’ll see any sweeping legislation, including a filibuster-proof budget reconciliation bill, before 2025. However, leadership of the tax-writing committee in the House means advocates for the low-income housing tax credit (LIHTC), new markets tax credit (NMTC), historic tax credit (HTC) and opportunity zones (OZ) incentive may be on the defense less between now and the 2024 election.

All of this, of course, comes on the heels of a significant expansion of clean energy tax incentives in the Inflation Reduction Act (IRA), which became law in August. This outlook also comes with the caveat that before the next Congressional session opens, there is a lame-duck session of Congress that could include some expansion or extension of community development tax incentives.

However, the results of the Nov. 8 election, when Republicans took control of the House by a razor-thin margin and the Democrats retained the Senate by a similar razor-thin margin, helps inform the next two years. The bottom line? All eyes turn toward the 2024 presidential election and a plethora of tax incentives that expire in 2025.

Republicans came into the 2022 election anticipating a large postelection margin in the House and possible control of the Senate. They came out with only a narrow edge in the House.

That expectation had reason: Every midterm election since 2002 featured at least one chamber of Congress flipping from the president’s party. After the past 10 midterm elections (covering 40 years), the president’s party controlled both houses of Congress only once–in 2002, when Republicans controlled the House, Senate and White House after an election barely a year after the Sept. 11, 2001, terrorist attacks and a month after Congress granted President George W. Bush power to decide whether to launch a military attack in Iraq.

So, the 2022 results were typical in form (the president’s party lost control in a chamber of Congress), although not in magnitude. When the Nevada race for Senate was called for Sen. Catherine Cortez-Masto four days after the election, it ensured Democratic control of that chamber, while Republicans finally clinched their 218th seat in the House a few days later to give them control of that chamber.

The results mean Charles Schumer, D-New York, will remain the Senate Majority Leader and Mitch McConnell, R-Kentucky, will return to his role as Senate Minority Leader (where he will break the record for years as party leader set in the 1960s and 1970s by Mike Mansfield, D-Montana, when he takes office in January and begins his 17th year in that role).

As of this writing, Kevin McCarthy, R-California, was in line to become to the Speaker of the House, taking over for Nancy Pelosi, D-California, although the disappointing election results for the GOP resulted in a potential challenge to McCarthy.

But for community development tax incentive advocates, the more significant roles are the leaders of the tax-writing committees in each chamber. There will be a significant change there.

The combination of Republicans regaining of the House and the retirement of Rep. Kevin Brady, R-Texas, set up a high-stakes race for perhaps the most important position for community development tax incentive stakeholders: Chair of the House Ways and Means Committee, the tax-writing branch of the House.

As of this writing, there were three main competitors for that position, all of whom have seats on the current committee: Rep. Jason Smith, R-Missouri, Rep. Vern Buchanan, R-Florida and Rep. Adrian Smith, R-Nebraska. Whomever emerges from that scramble (with the leadership election expected after Thanksgiving) will replace Rep. Richard Neal, D-Massachusetts, as the head of the committee and each is seen as friendlier to community development tax incentives than Brady.

Of course, all legislation must be reintroduced in the 118th Congress (which begins Jan. 3, 2023) and the chair of the Ways and Means Committee is rarely a sponsor for key legislation. It’s also unlikely that Republicans will look to expand the tax incentives–including the Neighborhood Homes Investment Act (NHIA, H.R. 2143), introduced in the last session of Congress–but the regardless of who emerges as leader, it now appears unlikely that there will be attempted rollbacks of the incentives with the Republican leadership of the Ways and Means Committee.

Meanwhile, Richard Neal, D-Massachusetts, remains the top Democrat on the Ways and Means Committee. Neal is one of the leading champions of community development tax incentives, having repeatedly sponsored legislation to extend the NMTC and enhance the LIHTC.

With the Democratic Party retaining the Senate, Ron Wyden, D-Oregon, will again be chair of the Senate Finance Committee, that chamber’s tax-writing committee. Wyden was the second lead Senate Democratic co-sponsor of the AHCIA (S. 1136), sponsor of the Clean Energy for America Act (S. 1298), which was largely enacted in the Inflation Reduction Act and a longtime advocate of other community development tax incentives.

Mike Crapo, R-Idaho, will likely remain as the top Republican of the Finance Committee. While Crapo was not among the Senate co-sponsors of the AHCIA, NMTC Extension Act (during this session, although he was a previous co-sponsor), HTC-GO Act or the NHIA, he has voiced support for many of the community development tax incentives in many occasions, including during a July 20 Finance Committee hearing.

It appears that the leadership of the tax-writing committees in both chambers of Congress will be neutral to positive for community development tax incentives.

With a split control of Congress, the chances for major legislation (which often provides a friendly vehicle for tax measures) decreases significantly. House Republicans may focus on rolling back changes made over the past two years by Democrats, including the minimum book tax and funding for the Internal Revenue Service that were part of the IRA, but Democratic control of the Senate (not to mention Biden’s veto pen) makes very unlikely.

However, tax legislation is often fueled by expiring provisions, which require action. While some provisions expired in 2021, there is a dearth of such provisions in 2023 and 2024.

The big year on the tax policy calendar is 2025, when the major provisions of the Tax Cuts and Jobs Act of 2017 are set to expire, along with the NMTC, the work opportunity tax credit, the employer credit for paid family and medical leave, empowerment zone tax incentives and several others. Congress will almost certainly consider a major tax bill that year.

While major tax legislation is probably on hold until 2025, community development tax incentive advocates are likely to turn to working with the Biden administration on regulations. For the clean and renewable energy community, Treasury is focused on implementing the Inflation Reduction Act, and there will be plenty of regulations and guidance released in 2023 and 2024. For affordable housing community, many of the proposals in the Affordable Housing Credit Improvement Act could be implemented through regulations, and that will likely be a focus. For the new markets community, many advocates will seek to consolidate existing authorized allocation rounds to accelerate investment in economically distressed communities.

With both parties waiting for the 2024 election–when the presidency and both houses of Congress will be up for grabs–before making a move, the next two years will likely see reduced serious legislative movement on community development tax incentives. Senate Democrats will face a particularly challenging map, with 21 up for reelection along with the two Independents that caucus with the Democrats. Three of those Senate Democrats—Sherrod Brown, D-Ohio; Joe Manchin, D-West Virginia; and Jon Tester, D-Montana—are up for reelection in states that Trump won in 2020. Furthermore, another six Senate Democrats—Tammy Baldwin, D-Wisconsin; Bob Casey, D-Pennsylvania; Tim Kaine, D-Virginia; Jackie Rosen, D-Nevada; Kyrsten Sinema, D-Arizona; and Debbie Stabenow, D-Michigan—are in states where Republicans are expected to vigorously compete. Meanwhile, only 10 Senate Republicans are up for reelection, and none of them are in states that Biden won in 2020, or where Democrats are expected to vigorously compete.

For stakeholders, the next two years may be about playing defense for existing provisions and setting things up for the next big push in the 119th Congress, beginning in 2025.

The question is what color the 2024 wave may be.